Combat Con 2021 just wrapped up recently*, the first large-scale North American event to start back up since the Covid shutdowns. It is also a tournament with a long history of using HEMA Scorecard, with Combat Con 2015 being the software’s inaugural tournament. Which means that there is a long running data set available to compare this year’s event against.

Why is this interesting? In 2021 (which I’m calling CC21) the HEMA tournaments were managed by an all new team, with all new rules. The events from 2015-2019 were under the same team, with very similar rules. So what changes are apparent from a data analysis point of view? (Note that I am only checking Sword and Buckler, Rapier, and Longsword as they are the most consistently used and attended of all tournaments offered year over year.)

*note to self, update this wording for whenever I get this published.

I reviewed the targeting for Combat Con back in 2018. So we do a baseline for comparison. 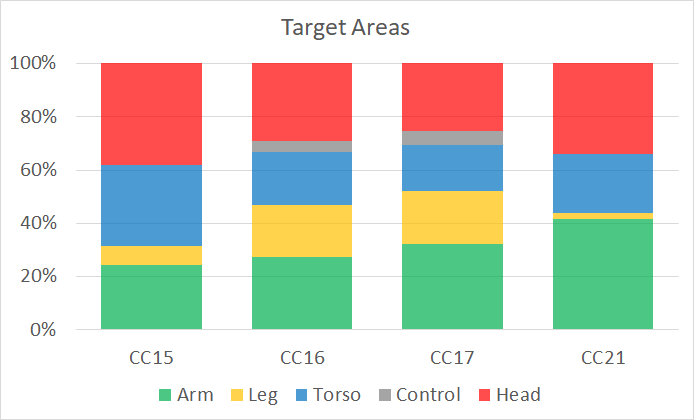 What we see is that traffic to the leg takes a major downturn, and the hits are redistributed to the arms and head. Which is not a big surprise, as the legs were worth comparatively less than they have been historically. 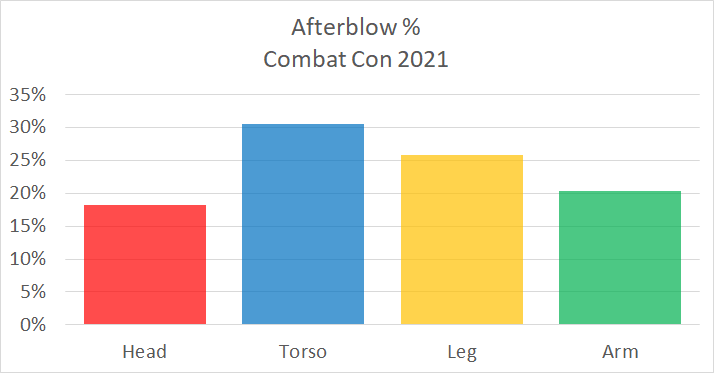 Tournaments ran late, which is a thoroughly unshocking observation. HEMA tournaments are constantly running overtime; remarking on this is rather uninteresting. However, having been involved in scheduling previous Combat Cons, I felt as if the matches were taking longer in the few I timed. So is this correct? Let’s have a look: 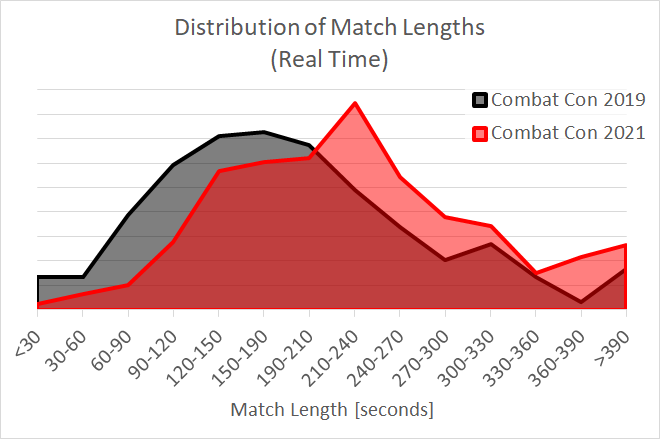 Sort of. There is a clear skew towards shorter matches in 2019. Overall the difference wasn’t that huge. The average time increased by only 29 seconds, from 3:20 to 3:49. Given 460 matches, over 3 days and 3 rings, it works out to about 30 minutes a day extra time. Which isn’t all that much.

I would like to compare with data further back, however the timestamps feature was only added to the HEMA Scorecard database in late 2018. I didn’t attend, nor was I involved in, Combat Con 2019 but it also may have been running longer than I am historically used to. Under similar rulesets I estimate 240 seconds per match, and it results in a little extra padding – this includes time between matches. CC19 was 266 and CC21 was 287, so it seems that the total time to cycle through matches has been steadily increasing for a few years at least.

It is well known that the actual implementation of the rules is as, if not more, important than what is on the books. Not only were the rules different, the whole event management (aka the people implementing the rules) was different. When watching the tournaments I noticed a buzz in the air about “they seem really insistent on not calling doubles”. But that is just hearsay without actual evidence to back it up. One of the reasons that we do data analysis is to confirm if our conjectures are correct, or if it is just confirmation bias on what exchanges we chose to remember.

What does that data say? You can’t really look up “what was the afterblow window” on a match score sheet. But we can try to get crafty and infer it. In order to find the judge timing calls lost to the mists of time we can try looking at the historical ratio between afterblows and doubles.

This has been somewhere around 1:1, though it has crept up slowly with time. This means that from 2015-2019 for every double landed in the tournament we can expect to see 1-2 afterblows landed. 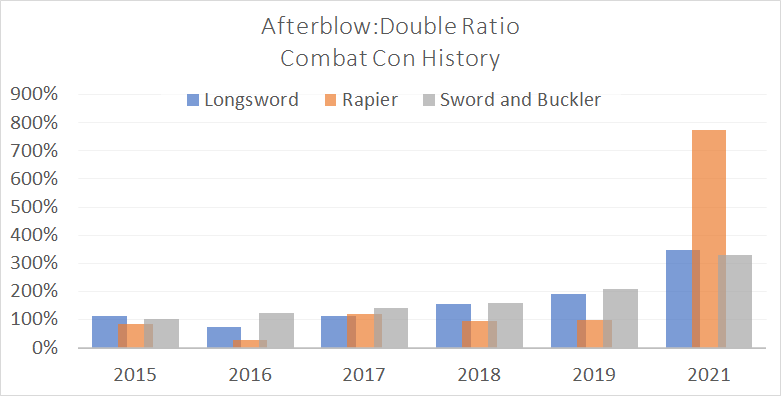 In 2021 the balance skyrockets to have way more afterblows than doubles. While this isn’t conclusive evidence that something happened to the way doubles and afterblows are differentiated, it is a pretty significant indication.

I bring this up because it is going to be important when we analyze the Bilaterals per Exchange.

This data shows that there is a noticeable increase in BpE for both Longsword (132%) and Sword and Buckler (124%). And the BpE of rapier has doubled over the historical average.

Which isn’t a great score using these metrics. But if you remember back to the previous section on afterblow ratio, it is likely that the underlying measurement methodology has shifted completely.

We could make two assumptions about the underlying fighter behavior:

I’m in the camp of the former, and my experience looking at data offers some evidence of this. But read the following knowing that it is more theory than proof.

We have a certain time window for a Bilateral Exchange. Within this window we have two smaller windows, one for a double and one for an afterblow.

If CC21 showed the behavior in (A) then the results are comparable to previous years. However if it was (B) then we are not counting an equivalent window for BpE. This is a problem when comparing BpE across any set of dissimilar tournaments, and normally you have to assume it washes out with a big enough population size. But for an annual event like Combat Con, with similar participant pools year over year, maybe we can do better.

I’m not going to go into the derivation here, but doing this interpolation yields significantly higher results. Where is the actual number? Who knows. But it is likely somewhere between the two. 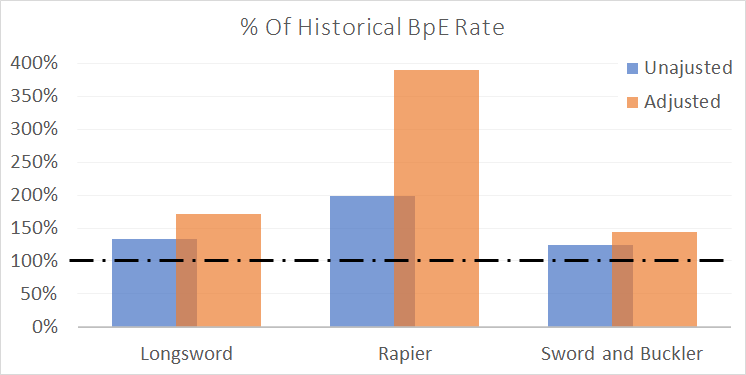 With the adjusted measurements (which you can choose to take or leave) both Longsword and Sword and Buckler saw an increase of about 50% in the number of bilateral exchanges. Rapier, or the other hand, saw somewhere between double and four times as many bilateral exchanges.

In every tournament data set I have analyzed so far we see a consistent trend:

While counter-intuitive to some, based on evidence it’s a pretty inescapable trend. Other than that: