I would like to officially announce that SwordSTEM is fully onboard with supporting this project and will be proud to supply a cache of medieval European weaponry.

But with that out of the way, we have more pressing concerns to get to. Evolution takes time, and we need to know which of the champions of the deep would emerge victorious in a sword duel.

In The Fishy Corner

The Great White Shark (Carcharadon carcharias) is best known as the star of the Jaws films. While it is true that the Great White is the largest of the carnivorous sharks, they generally don’t prey on humans1. While it is true that Great Whites are involved in their fair share of attacks on humans, the vast majority are non-fatal2. Which at first doesn’t make sense, how can a 900 kg (2000 lb) shark fail to kill a human in the middle of the ocean? The easiest explanation is that it wasn’t really interested in doing so in the first place. According to a scientist3:

“The Great White doesn’t have a lot of tools to interact with the world. Its main way of investigating something that it is curious about is to give it a bite.”

The Great White inspires fear in humans, because a swimmer looks as threatening as a rubber ducky by comparison. 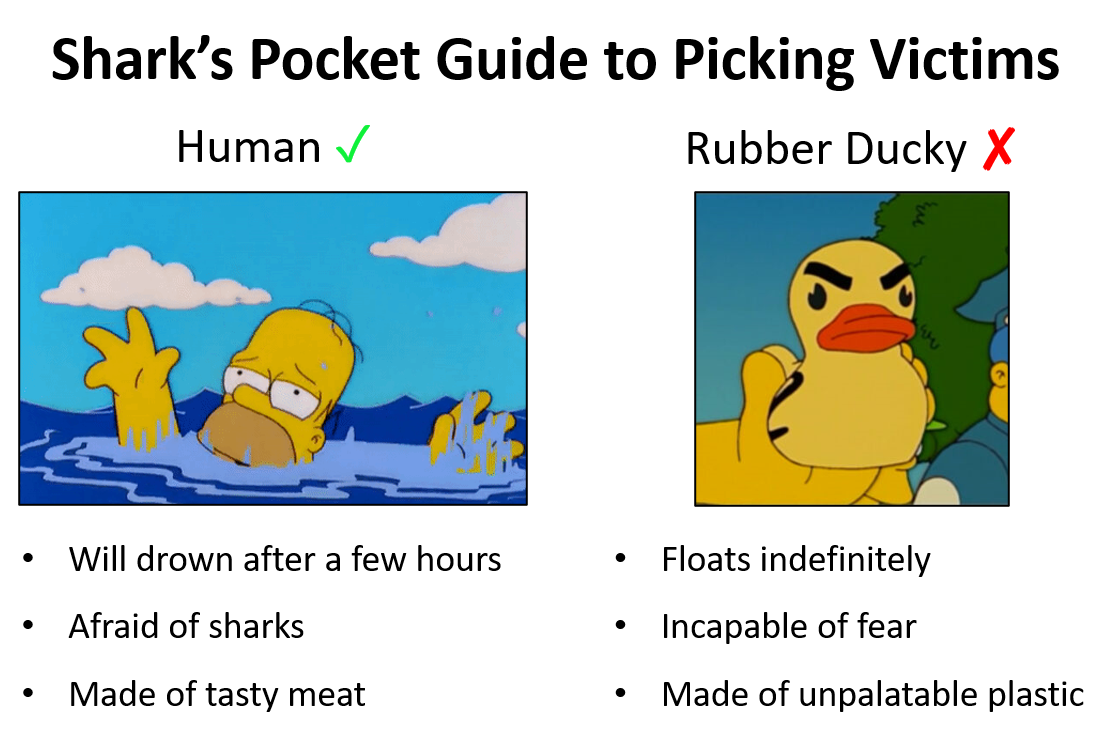 We are all familiar with the Great White’s bite as an offensive action, however it is even more formidable than you may have thought. They have specific adaptations of jaw muscle structure to be able to generate a high bite force no matter the size of the object they get their jaws around, unlike mammals which can only generate a high amount of force when their jaw is close to closed. (This isn’t super relevant to holding a sword, but I wanted to pigeon hole it in because I think it’s awesome that Dentistry Today is publishing articles about shark teeth4.)  Bottom line is that the Great White should have no issue holding a sword in its mouth.

Sharks are definitely inferior to any sort of whale in the intelligence department. But they are probably smarter than you think. Both the establishment of social hierarchies when multiple sharks are sharing the same turf (surf?), and rudimentary cooperative hunting behavior, have been observed5. Interestingly enough, we think of them as mindless killing machines thanks to the pop culture prevalence of Jaws, but if you go back and think about it, the shark in that movie was pretty damn smart for a fish.

One of the Great White’s biggest advantages over a Killer Whale is the fact that it can breathe underwater. Sharks, like all fish, have gills which filter oxygen out of the water and allow them to remain submerged indefinitely. While this is a huge advantage, it also means that the shark can never stop swimming forward. The gills rely on a constant stream of water passing over them, which requires constant motion. This is very problematic for fine measure control, and we can expect a Great White’s sword fighting style to be very buffel-ish.

The other massive vulnerability is known as Tonic Immobility. When a Great White is flipped upside down (belly up) it will go into a state of paralysis, and be essentially helpless. Killer Whales are well aware of this, and have been known to flip sharks over, and let them drown before helping themselves to an easy meal. Given such a weakness we can expect that employing Winden would be extremely problematic, if not impossible, for a Great White Shark.

In the Champions Corner

The Killer Whale (Orcinus orca) is not actually a whale, but a very big dolphin. While the name Killer Whale sounds scary, they are known for being benign to humans. (They are also more correctly known as Orcas, but apparently Killer Whale is more marketable.) Which is rather unusual, considering that they will prey on just about everything in the ocean.

The Killer Whale certainly strikes a less fear-inducing silhouette than the Great White. But looks can be deceiving. The body of a Killer Whale is significantly bulkier, and they can pack in a lot more muscle. 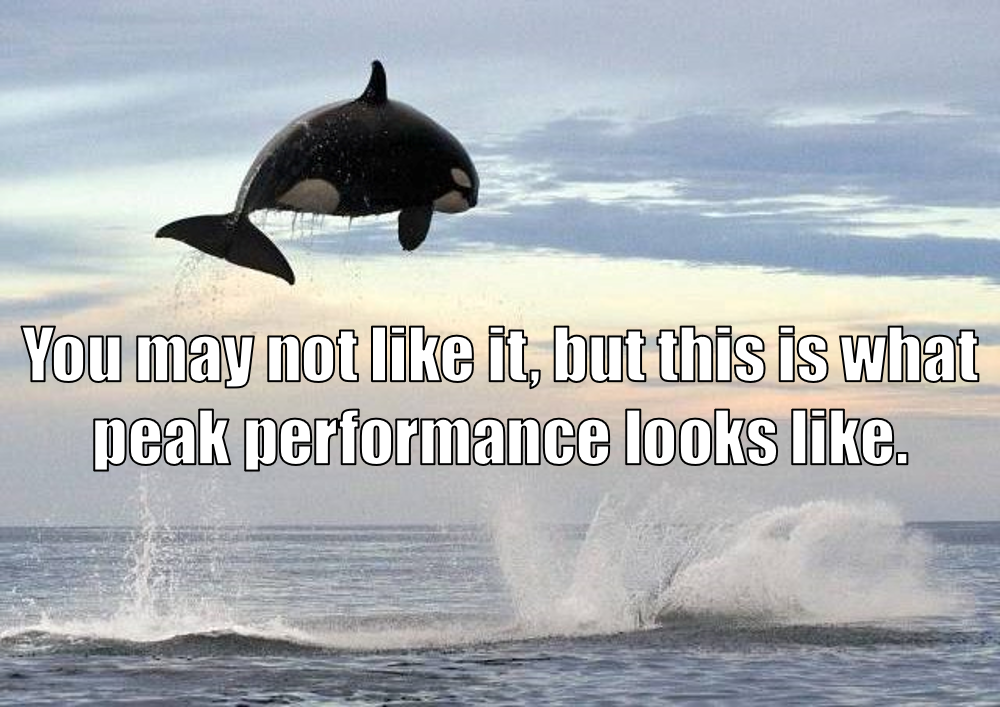 In addition to the extra muscle mass the Killer Whale is comparatively stronger per pound of muscle. This is because of the difference in breathing strategies. The Great White passively extracts oxygen out of the water through its gills, whereas the Killer Whale is air-breathing and has to hold its breath underwater. While this seems like a bad tradeoff, air breathing allows for a much higher rate of oxygen uptake, allowing the muscles to produce more energy. All of this means that the cow-like Killer Whale is actually faster and more agile than the streamlined bullet of the Great White.

The other major advantage of the Killer Whale is its intelligence. This enables complex social behaviors in hunting, though that is out of scope of this article. (April 1, 2022: Which sea animal phalanx would be most effective?) Bottom line is that they can be very creative in terms of hunting techniques, finding ways to get around the whole “prey on land” situation.

All and all I would consider the Killer Whales’ air breathing to be an advantage rather than a disadvantage, but the fact remains that they have to continually surface to breathe. Though theoretically capable of holding their breath for 15 minutes, 3-5 is more typical and when under high exertion tend to keep it in the one minute range.

Without swords added to the mix the Killer Whale is absolutely dominant. The Great White is typically regarded as an apex predator, but that always comes with an asterix: Killer Whales are known to prey on Great Whites. As a matter of fact, the appearance of Killer Whales is enough to send Great White’s fleeing6 with their tails between their… uh, that analogy might not work here.

The Killer Whales are smarter and stronger. They are also well aware of the Great White’s tonic immobility, and will ruthlessly exploit it to make a kill. So it sounds like the sharks would be well served to arm themselves to help protect from the whales. But how does that work out in the end?

Straight up: neither are capable of holding a sword. If we are going for the long game evolution strategy from the original comic the Orcas are way ahead. Sharks are fish, which have always been sea creatures going back to the Cambrian expansion 530 million years ago. Cetaceans (whales+dolphins) branched off from land dwelling mammals about 50 million years ago, and such the flippers are actually evolved feet/hands, with ‘fingers’ inside.

But none of that really helps now.

Tool Use by Aquatic Animals, by Janet Mann and Eric M. Patterson, didn’t identify any peer-reviewed studies which identified tool use in any kind of shark. The only applicable research on Killer Whales as their manipulation of ice flows and generation of waves to help them hunt seals. While this is the only research in peer reviewed journals, there are accounts of Killer Whales being very proficient in the concept of tool use – as proficient as you can be without hands.

One of the whales, probably an adult female, was lolling in front of us. I wanted her to know we were there, so I tossed a snowball out to her. My throw was off: it tapped her on the side, and the dry snow vaporized with a muffled “pat.” In response, she hesitated, and then, to my surprise, she started pushing around a piece of ice that was a couple of feet across. At one point she flicked it with the end of her snout, and it broke in two. She disappeared for a minute and brought back a replacement chunk of ice — about the size of a volleyball. This time, when she arched her head back and snapped it forward, the ice flew out of the water and several feet ahead. For five minutes she motored around the small pond in front of us, repeatedly launching her ball of ice, before she lost interest and went on her way. I had to wonder: Did I just show a killer whale how to throw snowballs?

So the Killer Whale would be:

To make it more interesting, let’s throw intelligence out the window. Imagine that both the Great White and the Killer Whale are as smart as a human, and just duke it out on physical ability.

Due to inability to stop and play a fine measure game, the Great White only has the charge and crash option available. In addition they are only able to exert a lot of movement and control laterally. Fish have bodies which are designed to move side to side, which is why the tail is mounted vertically. This is shown by this awesome up close image of a Great White in the wild. Whales have body structures and tails which move up and down, which is shown in this promotional move shot from the movie Free Willy. 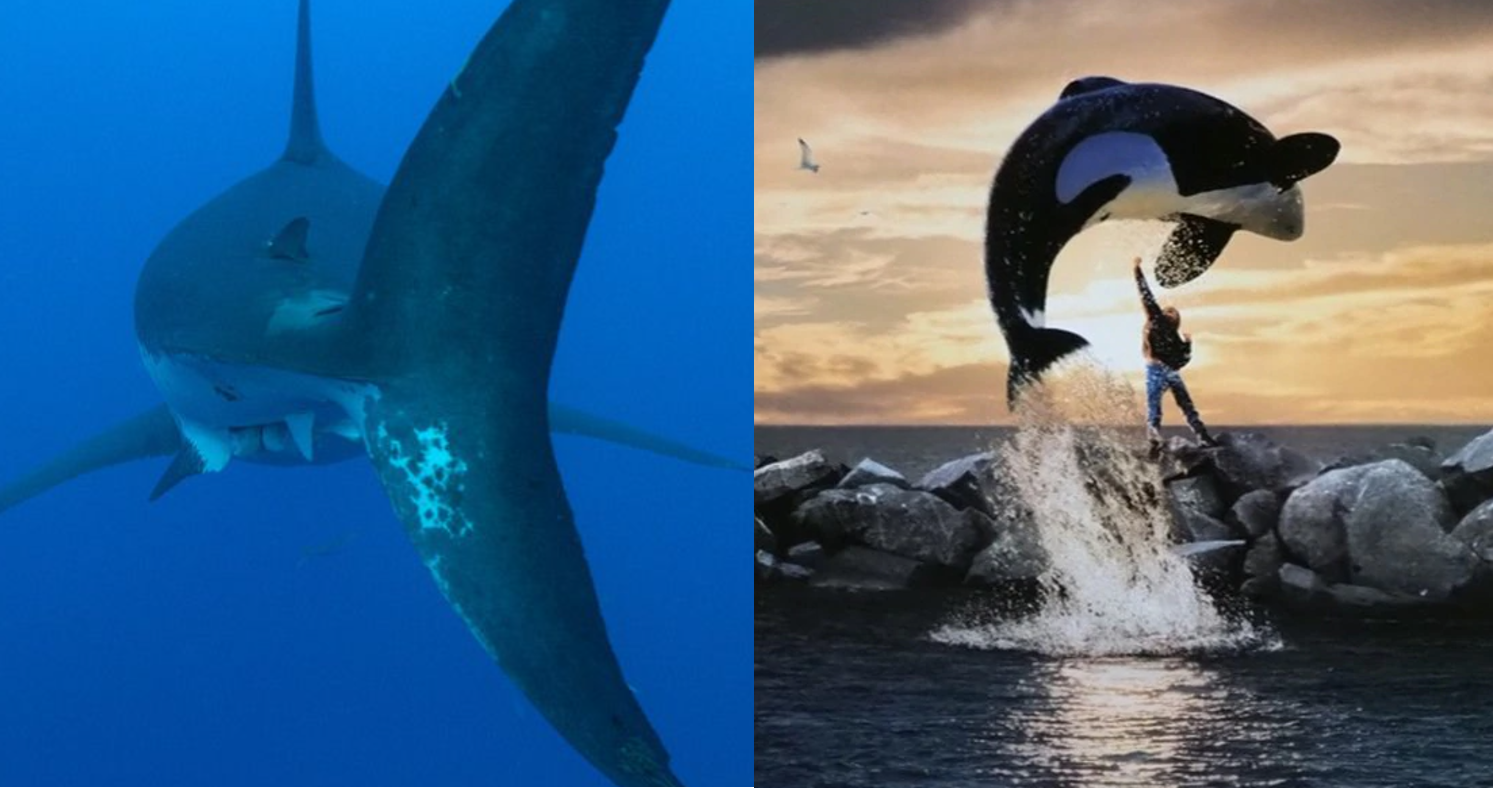 Charges right in, and swings wildly from side to side. The Great White looks well suited to the modern HEMA tournament scene. The Killer Whale, on the other hand, is more suited to moving up and down (early HEMA tournaments). This doesn’t seem as useful from a swordfighting point of view, however we also must consider that a Killer Whale is very comfortable rotating its body to any orientation necessary to hunt its opponent. Hunting strategies which involve swimming sideways or upside down are very common, giving the Killer Whale the ability to match or exceed any angles the Great White is trying to employ.

This is all on top of the fact that the Killer Whale is more maneuverable and faster. So it likely gets to pick its angle of attack to begin with. We all know that the sword can only cover part of your body, leaving the other parts exposed. When you are a several thousand pound marine animal, the exposed area gets a lot bigger. So one would expect that bladework would be of even less importance in comparison to ‘footwork’. (Finwork?)

And after all the blood, gore, and readers questioning why I would write such a thing, the Killer Whale maintains its dominance, dispatching the Great White in every sword fight imaginable. And thus maintains its crown as king of the sea. Or does it… 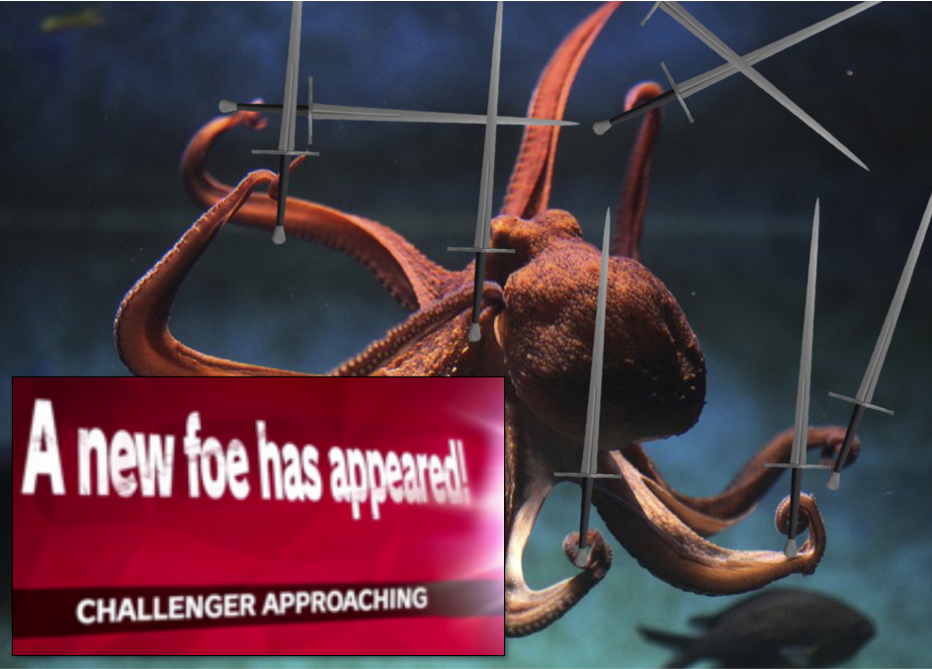 (And this article also officially has the longest word count of any of my SwordSTEM publications to date. The funny idea might have gotten away from me, and had I not forced myself to avoid a comprehensive analysis in the Strengths/Weaknesses columns it would probably have been another 1000 words.😅 )