Video analysis is a great tool, and it is used frequently in HEMA. In this article I will use a technique of landmarking to help characterize motions a little more effectively. A big thanks to Stephen Cheney for ‘donating’ these videos for analysis, as they showcase exactly what landmarking can be good for.

The two videos are as follows:

Video #1 – Steve succeeds with a zwerhau cut on a tatami mat.

Video #2 – Steve fails with a zwerchau cut on a tatami mat.

There are many things that can make a cut succeed or fail, but body engagement is a big one. Upon viewing these two cuts I was able to see that the hip was stopping before the cut in one and not the other. But unless you are looking for it, and know exactly what to look for, chances are most people would miss this detail.

Am I just amazing? No, it is that I have trained myself as a coach to look for certain landmarks in motion analysis, and see their timing in relation to each other. And most of it happens subconsciously, as fencers move very fast.

But we don’t have to rely on our real time ability alone to diagnose problems. We can use video, particularly slow motion, to help. In these examples I am using motion capture and math, but it is really just a proxy for what is happening ‘under the hood’ to an experienced coach. So let’s begin!

To start with landmark analysis we need, as you may have guessed, a landmark. What struck me about these videos, and why I’m using them, is that there is a really good landmark for the motion of the hip. And that is the manufacturer’s logo on the side of the fencing pants. 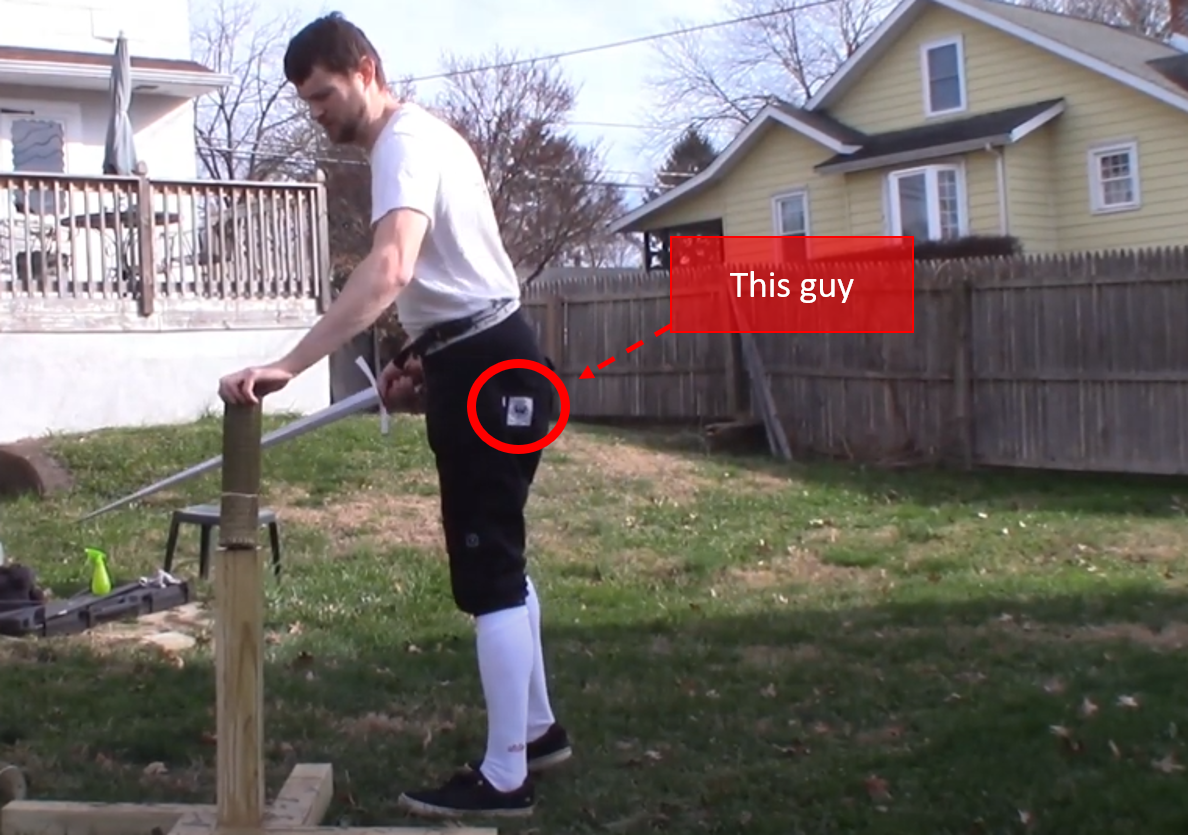 With our landmark established we can then do some motion tracking. I’m usually trying to track swords which move very fast and blur in the footage. Fortunately the hip moves much slower and is much nicer to track. 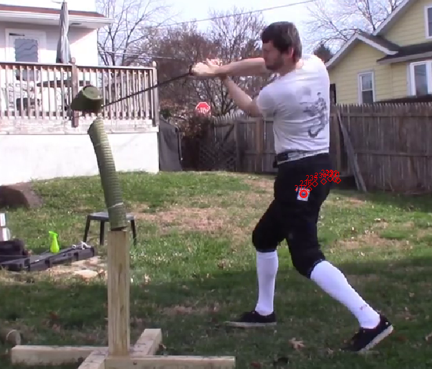 Let’s take a look at the speed of Steve’s hips in the two cuts, where I have normalized the time scales so that ‘0’ is the impact with the tatami.

There is a big spike in the hip speed of the successful cut right before impact, which is what your eye probably jumped to. But that isn’t the real story here. Notice what happens immediately after impact. In the failed cut the hips stop very quickly, as opposed to the successful cut they keep going. (You may want to argue that failing the cut stopped the hip, but good luck getting your body stiff enough to transfer the force from the tip of the sword to decelerate your whole body in 30 milliseconds.)

It is more telling when we look at the hip acceleration.

Naturally when a cut fails the first culprit people jump to is ‘bad edge alignment’. Which is technically true, but doesn’t say a lot about the root cause.

In the first case the arms/shoulders can essentially be static, where in the second they are providing the rotational impetus. When the arms are static they can be engaged in the fine control of the movement, whereas when they are delivering power they do not have that privilege.

A fun activity to feel the difference. Fill a cup all the way to the brim with water and pick it up. See how quickly you can move the cup side to side without spilling anything. You will very quickly find that moving the body, and having the arm stabilize, is the best strategy.

This is the same for cutting. Imagine that keeping your edge aligned to the cutting plane is like not spilling water. It is much harder to not spill water if you suddenly jerk the hips to a stop in the middle of the motion. Instead they should be smoothly following through. (Of course aligning your blade to the cutting plane requires you to first create a good cutting plane. For further reading: There is no horizontal zwerchau cutting plane!)