I don’t really like to criticize when I don’t have a good solution. I’ve been thinking about the best way to conduct flex tests, and (as you may have guessed by the lack of published articles on the topic) I’m still not there yet. And because of this I don’t really want to go around slagging other methods of determining blade flex.

But the topic has come up for discussion, so I think it’s best to get the known limitations of the other options on the table first. To be an effective test of blade flexibility we need to be able to:

IMPORTANT: Blade flex is something that happens when you impart a force on the sword. Blade stiffness is what determines how a blade will flex under a given load; and therefore ‘flex’ is not a property of a sword. In casual conversation we use flex to mean lack of stiffness*, but from this article it is important to keep what we are talking about clear.

*compliance is the technical term for the opposite of stiffness.

You may think that I am going to rant about the name ‘flex’ being inappropriately used, but in this case it is correct. This test is accomplished by applying a known force laterally across the weak axis of the blade, and measuring the displacement.

The description of the test I was able to find:

All steel blades must be reasonably flexible.  If doubt exists about a weapon’s flexibility, an acceptable field test is: Hold weapon parallel to the ground, supporting handle against table or bench if necessary. Hang a 6 ounce weight (170 grams) one inch (25mm)from the tip. If the blade of a dagger (out to 18 inches blade length) flexes at least 1/2 inch (12.5 mm) the blade is reasonably flexible. For a heavy rapier blade (18″ or longer), the blade must flex at least 1 inch (25 mm). For use in cut and thrust rapier, the blade must flex at least 1/2 inch (12.5 mm). Any blade 18 inches or longer, being used in melee combat, must flex at least 1 inch (25 mm).

If we look at our criteria we can see that this is very repeatable, and relatively easy to implement. Which makes sense. In the SCA participants bring all sorts of DIY gear from who knows where. Maintaining an ‘approved swords’ list is nigh unworkable, thus necessitating the need to test onsite.

This test is, however, somewhat lacking in the ability to produce useful information. At some level it provides a very good filter. It has its flaws, but it is a good objective way to weed out crowbars on hilts.

So why am I saying that there are measurement difficulties with the SCA flex test? To illustrate the concept we will go with a thought experiment. Let’s say that we have two rapiers of identical length. Each one consists of two completely rigid bars, connected by a spring of identical stiffness. The only difference between the two is where along the ‘blade’ the spring is located.

What you will see is that the ‘sword’ with the spring closer to the hilt will flex a LOT more when a load is applied laterally to the tip of the sword.

My example is a little crazy, as there are no swords out there that look like this. But it illustrates the concept: the SCA flex test favors blades that are more compliant near the hilt, in comparison to blades that are more compliant towards the tip. But if you take these two pseudo-blades from the example and stab them into something, you will see that they both behave exactly the same..

You may want to point out that my example isn’t completely accurate, because it neglects the hand on the hilt side adding a sort of boundary conditions. Or, you may be now wondering “what the heck is this boundary condition thing he is talking about?”. Fear not, I have answers for both of you in the next section.

The other most common blade stiffness test has no “official” name, so I’m going to call it the Buckling Test, because on a technical level you are looking for the critical buckling load. (If you want to learn a bit more about buckling you can read Blade Stresses). The procedure is as follows:

This method eliminates the concerns I raised above with the SCA Flex Test, but it is very prone to inaccuracy. Buckling is the ‘flex’ that happens when a column is loaded end-to-end. In normal circumstances we wouldn’t want to see any buckling out of a column – that is generally a “start running from the building” flag. This is because once a column starts to buckle its ability to hold weight drops dramatically.

This is why it is very difficult to hold a blade with just a little bit of flex; once buckling is instigated your column effectively starts to collapse. Very tiny changes in force produce a big difference in the amount of deflection. But working in the opposite direction it helps us out. If we are controlling the flex, we will see the load force doesn’t change much as the flex  Swords with a 1 cm or 2 cm deflection will have almost no difference in their loading.

The stability of measuring the critical load is what makes the Buckling Test work. It would be very difficult to take a reading at exactly 10 cm of deflection without a test setup, but the critical load is measurable using your bathroom scale. The difficulty comes in when deciding where to load the sword, and what boundary conditions to use. I performed a Buckling Test on a longsword blunt, varying the procedure slightly every time. And got very different results. The control variables were:

Force Location – Where I push on the sword has an effect, because it will effectively make the sword longer or shorter. If you hold the crossguard the only thing that can flex is the blade, if you hold the pommel it can also bend through the whole hilt. Holding with a two handed grip allows you to control any deflection of the hilt to a far greater extent, but any misalignment is also greatly multiplied. The three force locations were:

Boundary Conditions – What is happening on the two ends of the sword. On the tip the boundary condition would be considered ‘pinned’, as it can buckle from side to side. On the hilt side it is fixed if I manage to keep the blade perfectly straight. It is pinned if I let the blade rotate in my hand. 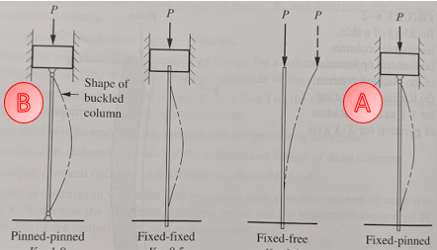 We can see a HUGE variation in the test result according to how the test is conducted. Some key takeaways:

So while the Buckling Test is looking at all the right things, it is too variable to determine the outcome with any precision. If you are testing two swords back-to-back with the same person you can probably get a reasonable result, but adopting it wholesale as a standard is going to produce some large variances.

This is normally when I tell you what the better option is, but I don’t know. The SCA Flex Test has been in use for a long time, and has proven scalable and consistent. While it isn’t perfect, it can weed out swords that are really out to lunch. The Buckling Test tests exactly what needs to be tested, but has many implementation difficulties. So there is room for innovation!

Note: Making a jig for the Buckling Test doesn’t really solve the problem. Unless it is super well aligned it could be testing the blade at a slight angle, which will really affect the result. A feder having a slight bend to start with will also considerably affect the critical buckling load, but the overall stiffness to a far smaller degree.