Stress is the force applied, divided by the area on which the force is applied. (What is Force Dispersion? And how it keeps you safe from swords). We normally think of this when examining the effect of a sword on the body. For instance: I can swing a sword at you and have the sword exert a force on your arm when it hits. Depending on the contact surface area:

The same mechanics are at play within the sword itself. The force that is being exerted on your body is also being transmitted back into the sword. And rather than being absorbed by weak flesh and bone, the force is acting on hardened steel.

The first type of stress we will look at is shear stress.This is a stress which is applied across the long axis of the blade. The amount of the shear stress is determined by: 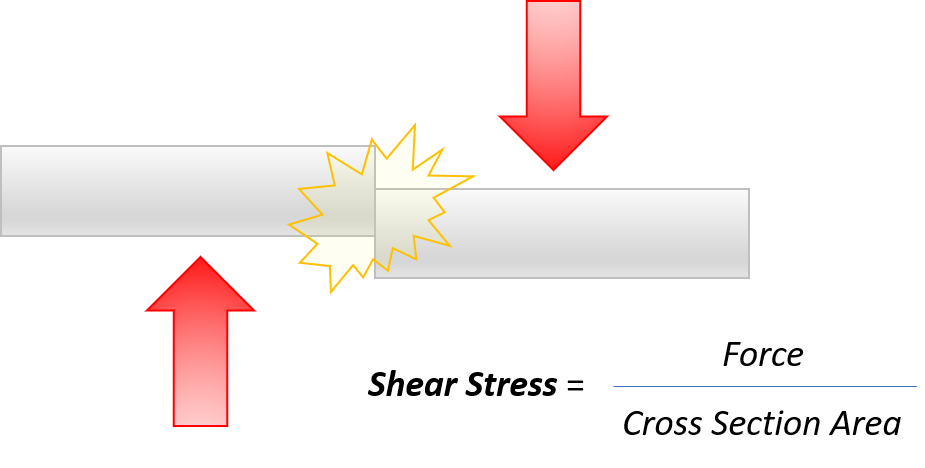 If you remember anything from grade school geometry it might be that the area of a rectangle is the length times the width. Which means that for a sword the shear stress is the same whether you are applying the force on the edge or on the flat.

The shear force is going to be the same the entire length of the blade, however the cross sectional area is not.

Which means that the maximum shear stress is right on the impact point of the sword.

Axial loading is force applied directly into the end of a beam. While we do this a lot in swordfighting (aka, stab people), the overall magnitude of the stress it produces on a blade is low in comparison. But keep an eye on the concept, it won’t go away.

Buckling is when you load something up in axial compression until it starts to bend. In swords this is ubiquitous. We know and expect all of our blades to have flex, the question is only how much. In structural engineering buckling is regarded as more of a pass/fail criteria. You design so that you will never buckle.

The buckling in the blade produces stress which is similar to beam bending, so let’s skip ahead to that.

“Moment” is what engineers call torque so that we can feel superior to people who use more pedestrian terminology. It can manifest itself in a few different ways, such as buckling, mid-span loading, and cantilever bending. For our use case of a sword we are interested in cantilever beams.

A cantilever beam is one that hangs out and has a force applied to the end. This is the type of loading that you would see on a crane which is lifting a load. There is probably something else we are familiar with that I could use as an example…

When you hit something with a sword, you are making a nice cantilever beam, applying the load – contact with whatever you are hitting – and the support – your hand(s). This will also generate a bending moment, which is more of a “snap in half” type of behavior, in comparison to the “shear in half”.

When dealing with moment (aka torque) remember it is all force * distance behavior. In the case of the cantilever beam (our sword) this is the distance between the impact point and the part of the blade we are interested in. The actual bending stress is a function of the section modulus, which is a property of the cross sectional shape of the blade. (Learn more about Section Modulus: Do Fullers Make Feders Take a Set?)

So why are there question marks in the above plot of bending stress? Because we don’t know what a “typical” blade profile is going to look at in this regard. When looking at the shear stress it is fairly simple. Just about every post-bronze age blade is going to have an increased cross sectional area as it approaches the hilt. So it’s safe to assume that the shear force (which is constant) is going to produce a shear stress which continues to decrease as we approach the hilt.

With bending stress we know that:

Now the question is, is there ever a crossover of these points which leads to a higher stress region? It all depends on the blade profile; some swords can create a stress concentration region. This is where the sword is relatively thin, and the bending moment has “overtaken” the section modulus. But later the section modulus “overtakes” the bending moment again, due to its exponential increase. 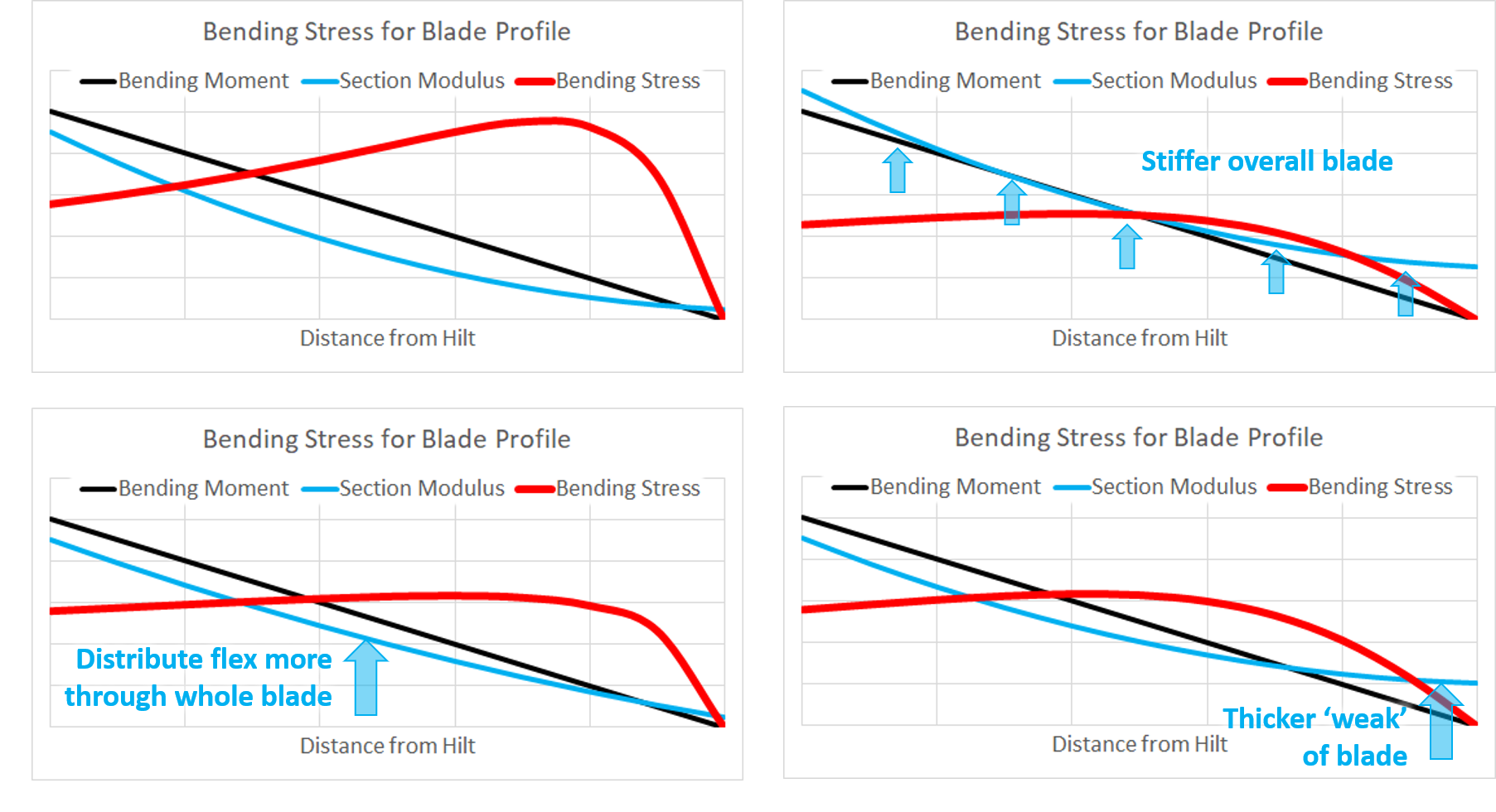 The impact position is also important. As you bring the impact closer to (or past) this stress concentration point you will see the effect decrease, or go away completely. 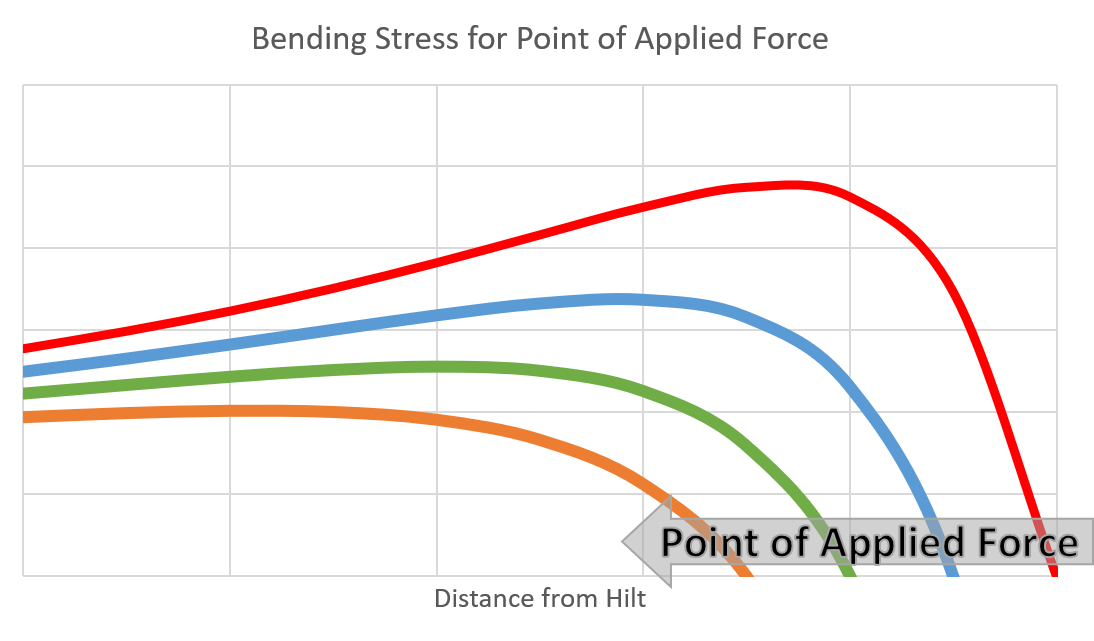 Torsional stress is the stress you experience from twisting something.

In a straight blade impact we wouldn’t expect to see any torsion. However, how many sword impacts happen perfectly straight? If the blade doesn’t meet the target perfectly in line you will cause torsion. This is what you will see if you cut into a person (or sword) without perfect edge alignment. 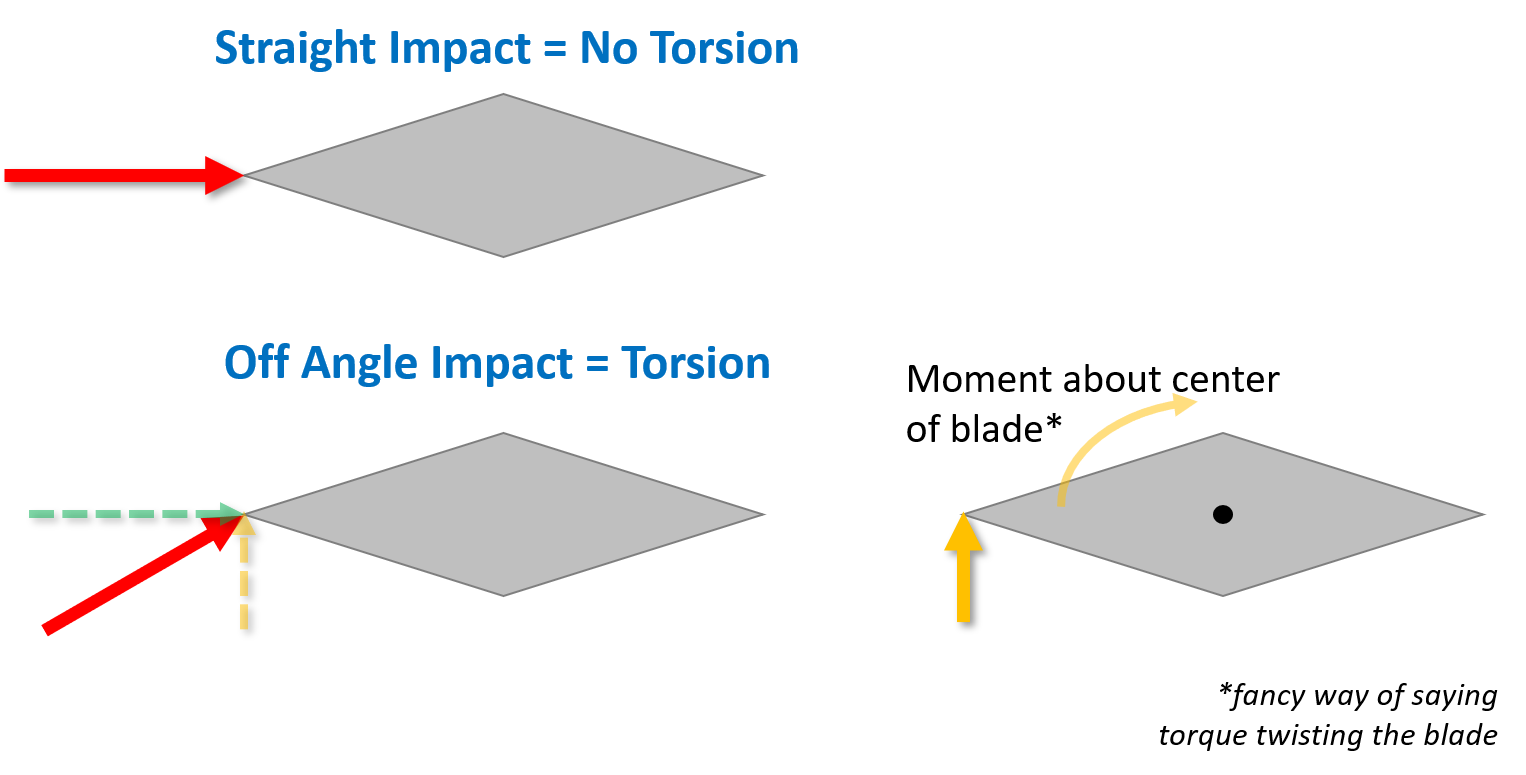 Much like shear force, torsional force is constant over the entire blade. However the resistance to torsion, the polar section modulus, is exponentially increasing the closer you get to the hilt. Which means the torsional stress is going to be at its maximum at the impact point.

When you thrust something with your sword you will see:

When you impact something along the length of your blade (cut or parry) you will see:

And the resultant maximum stress on the steel is a combination of all forces stacked up together. For example if we combine the shear and torsion forces together: 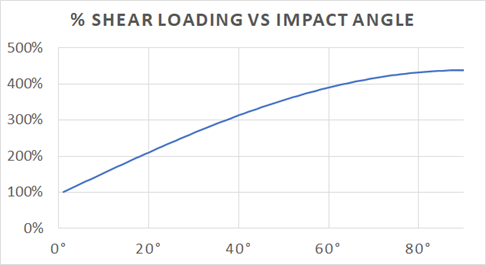 And if we want to factor all three together?

Suffice to say it gets complicated. But for now the takeaways are:

About Sean Franklin 102 Articles
Sean has a Bachelor's Degree in Mechatronic Systems Engineering, and is currently employed as a Controls Engineer. He is passionate about developing more analytical ways to view sword fighting, wishing to develop evidence based standards for protective gear and rule sets informed by tournament statistics. His martial arts history includes competitive success, medaling in international competitions for Longsword, Messer, Grappling, Rapier, and Cutting. In addition to competition Sean has been invited to instruct at a number of events across North America and Europe. For non-STEMey coaching topics Sean posts on https://www.swordstuff.blog/