A while back I published an article about how connection with the ground is important for power generation, as the force our feet exert on the ground is the real source for a lot of our rotational power generation. It’s Not “All in the Hips”. I also conducted a thought experiment where I asked you to imagine an astronaut in space swinging a sword. In order to generate the rotation would would have to generate an opposite counter rotation with the lower body. The hips would have to oppose the shoulders.

This was just a theoretical exercise; to date NASA has not seen fit to return any correspondence about a SwordSTEM collaboration project. But turns out that you can see this in action on good old Terra Firma.

The following is a clip of RJ McKeehan (South Coast Swords) basically just having some fun cutting a bottle in a weird way. Which was amusing, but then I noticed something…

The lower body is rotating away from the sword, just like the physics would predict for someone not connected to the ground. Hypothesis not disproven!

For contrast, compare the hip rotation when the cut is delivered with the feet on the ground, and the hips rotating in line with the sword.

This counter rotation of the hips, opposite to the rotation of the upper body, is how you must generate force any time you don’t have proper grounding. This doesn’t only mean when you are doing your sweet jump slash attack. Any time your feet are unsteady you will have to recruit muscles like this. If you are in the middle of stepping and want to initiate a cut part way through, you will have to rotate your hips against the cut.

We can rotate our hips in both directions, clockwise and counterclockwise[citation needed]. Cutting is just about always taught in a way that opens your hips, the body moving towards the side of the back foot. This is done because you have a greater range of motion on this side–the body doesn’t get tangled up on itself and locked because of the hips moving off their natural plane. If you cut towards the lead leg the hip has to move off the natural line.

That isn’t to say that there can be no benefit found to moving like this. While twisting the body towards the lead leg tangles us up, it can also enable a much higher degree of force production. Imagine you are standing with the hips in a neutral position, and you want to exert force in a counterclockwise direction. To rotate the hips this way you need a forward force on the right hip, and a backwards force on the left hip. 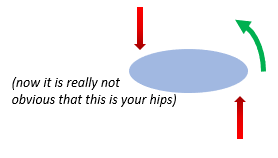 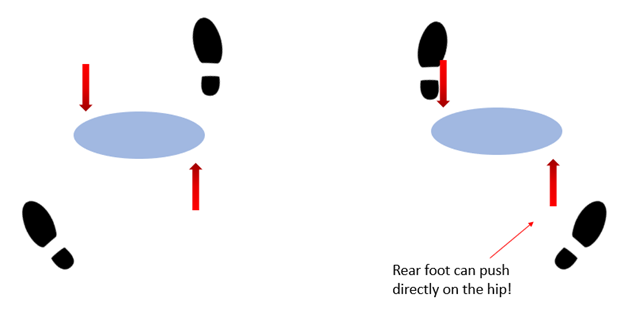 To generate as much force as possible, we actually benefit from cutting across our body! This direct transmission of force is one of the reasons we see throws which are counter rotating the body.

More force sounds great, right? Well, as shown above, we have a problem with the hips not being able to rotate through. Because the hips are inhibited, the structure starts fighting itself right when we would be half-way through the cut. This leads to instability in the edge alignment, and a rapid drop off in the force as we follow through. In essence you can cut to Longpoint in a very powerful way, but overall you decrease your ability to throw a complete cut through the target.

This is also true in wrestling, as you can generate a lot of force, but can’t rotate your whole body around to complete the throw.

So we now have a nice grid of possible rotation options.

Practice has shown that the best cuts are by far delivered by the Grounded, Open Rotation method. In fact, most of you have probably not thought of the other two valid modes. But they do exist, and you can carefully consider the pros and cons to decide if you want to incorporate them into your fencing. Just do some test cutting to see how much rotating against your hips actually affects you.