Concussions frequently get brought into HEMA safety discussions, with good reason. Not only are they really bad to get, they tend to not conform to our normal expectations surrounding safety and recovery. Modern medicine allows for broken bones to be healed as a matter of routine, but a brain injury is a completely different story.

I haven’t been super keen to write on this topic in the past, as there have been several HEMA-specific articles written on the topic which already contain the information I can provide you. But it is something that people have asked for, so here we go!

What are the criteria for a concussion?

You may have heard someone say that “X pounds of force will cause a concussion”, or some other such criteria. Let me get something out of the way, right off the bat.

I approached some engineers working at a company that specialized in making products to protect from concussion, and asked them if there was a way to evaluate what would give someone a concussion. They flat out told me there was not.

Which may cause you to wonder: how can they be a concussion company if they don’t know what causes concussions? While we can’t point to a specific number or type of scenario and say: “This would or would not cause a concussion”, we do know the kind of motions most likely to cause concussions and can work to reduce them.

What is a concussion?

Concussions, also known as Mild Traumatic Brain Injuries (mTBI) are, like the name suggests, injuries to the brain. Unlike looking at a math textbook and saying “this makes my brain hurt”, a concussion involves actual physical injury to the brain.

The brain is in the middle of a nice bony protective case, the skull. For some people it’s thicker than for others. So causing a physical injury to the brain doesn’t happen in quite the same way it would when you think of something like a blunt sword breaking your arm. Sure you could have a feder physically fracture your skull and then impact your brain…. but at that point we are beyond the ‘concussion’ diagnosis.

What causes the damage is your brain hitting the inside of your skull. Imagine you are sitting in the passenger seat of a car, not wearing your seatbelt (Brains don’t have seatbelts). If the car crashes into something, you are going to go flying and crash into the windshield, hurting yourself. Even if the windshield doesn’t break from the car crash, it’s not much consolation for you inside the car.

Cars have airbags, and brains have fluid membranes. This has a damping effect on the brain, offering a degree of protection. I recommend reading Impulse, Impact, and Momentum to get a better understanding of how this damping effect works.

One way to sustain injury is to have something hit your skull hard enough that it knocks it into you brain. You can imagine the fluid membrane as a set of springs which keep your brain suspended inside your skull.

But the brain can also whack into the skull, so to speak. If you are walking behind someone and they stop, all of a sudden you will probably crash right into them. Same thing for brains and skulls. If you stop faster than the fluid membrane can deal with, it sends the brain flying into the skull.

What can happen is that someone takes a hit on the back of the head and it sends their brain crashing into the front of their skull. If someone takes a hit to the back of the head and they report that it hurts in the front, that is a big concussion warning sign. (But absence of pain in the front does not mean that they don’t have a concussion. Leave things like this to trained medical professionals, not articles you read on the internet.)

While these are sources of concussion, they are not the highest risk.

The brain is at the highest degree of risk for concussion when subject to rotating forces. This has the effect of shaking the brain in its container. 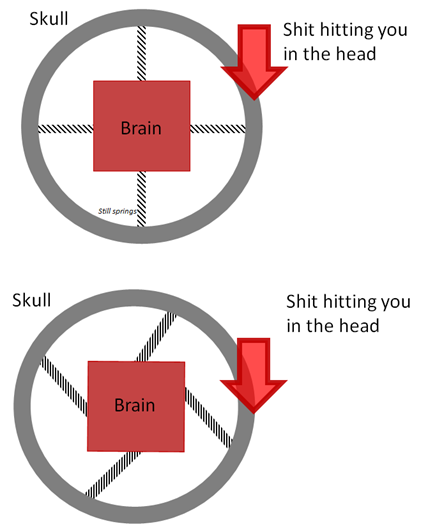 Now, you may think that rotation is kind of weird to think of in the context of HEMA. After all, super commando neck snapping moves rarely come out in free play.

Remember that ANY time your head is hit off center it is subject to a rotational force, aka torque (aka a ‘moment’ for those even more technically inclined). Also remember that it is attached to your body, which acts as a pivot point as well. Even if something hits you square on in the head, your spine can turn it it into a vicious rotation of the skull. Think whiplash, except this is the part that messes up your brain, rather than the part that messes up your neck.

In any of these examples, would adding an extra layer of armor have prevented the concussion? The answer is no!

This is counterintuitive to most people. After all, if you are worried about a broken arm, you just put on a thicker jacket and more pads. Most people apply the same thinking to masks, and think sturdier is what they need.

The concussion is a fundamentally different injury. (Then again, if you don’t have sturdy enough head protection and the blow cracks your skull…)

That said, it doesn’t mean head protection is completely useless. There are two ways it can help… and one way it can actually make things worse!

Even the crappiest of masks have some degree of padding between the hard outer shell and their innards, which is your feeble skull. Going back to force dispersion, this means that the force from the blow is transmitted to your head slower, causing less acceleration.

This is one of the areas where modern HEMA gear could use the most improvement. Our masks are essentially beefed up sport fencing masks (if not simply a sport fencing coach’s mask). They are taking impacts from forces far higher than they were designed to meet and at angles that they were never intended to protect from. While we can increase the strength of the frame and mesh, how much consideration has gone in to re-working the internal padding and suspension?

I won’t talk about exactly what needs to be done, because I don’t have enough expertise in the field. But I do know that this is what people need to start thinking about instead of freaking out and making the outer shell of the mask stronger and stronger.

Did you know that in some cases, wearing protective headgear might increase your risk of concussion?

Let’s think about torque for a second. You know that the further out from the pivot point you push, the more of an effect you get. When opening a door you push/pull by the handle, not near the hinge.

Same principles apply to spinning your head around its spine. If someone hits you on the outside of your mask, they have a better lever to spin your head.

This is offset by the fact that the helmet also makes your head heavier and harder to spin. But there is debate that the protective equipment might be increasing the risk of concussion in certain sports with bulky and light helmets. While I haven’t done the math, I really don’t think this is an issue for HEMA.

This is a physics article, and not a medical one. But I think I would be doing the community a disservice by not mentioning a little bit about recognition and treatment.

There are many different organizations which have created pocket guides for “on the field” concussion recognition. I can’t recommend which one is best but when I did my concussion training the recommendation was the Pocket Concussion Recognition Tool, by the Concussion in Sport Group. (https://www.coach.ca/files/Concussion_Pocket.pdf). There are also many phone apps which have been developed, but I can’t offer any recommendation or insight there.

The Canadian Coaches Association has some resources which give a little more information on the topic, and some nice animations which make my clip art drawings look like garbage in comparison.