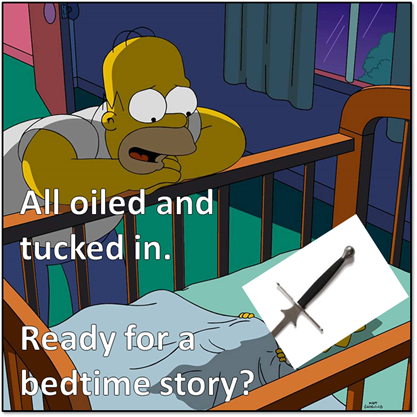 So you may think it is crazy when I say that training swords don’t necessarily wear out. But first you have to understand what wearing out really means.

In the early days of civil aviation they didn’t have the stellar safety record that modern airlines do. (Despite a number of high profile incidents, flying is an extremely safe way to travel.) This concerned the American Federal Aviation Administration of the 60s, prompting a widespread investigation into aircraft safety. But the funny thing was, increasing the maintenance done performed on aircraft didn’t seem to help. In fact, it seemed that the more maintenance they did, the worse the problem got!

This lead to some very in-depth research into how, why, and when individual components fail. And what they discovered turned the whole concept of engineering maintenance on its head. The vast majority of failures are not linked to age. Failure patterns usually fall into one of six types, and only one is what we would normally associate with ‘wearing out’.

You know what it is like to have something wear out. The treads on your car tire wear down and need to be replaced. Your shoes give out after training footwork endlessly, day in and day out. You cut a bunch and your sword gets dull.

In all of these cases the wear is constantly happening. But only when it gets to a certain point does the equipment ‘wear out’. It doesn’t matter if your shoes are constantly getting weaker as you use them, as long as they are sufficient to hold together. And given the same make of shoes they will all likely wear down enough to fail at roughly the same number of steps.

Failure pattern B is exactly what we think of when we imagine failure. It is intuitive and is the failure mode exhibited by many simple items that experience friction wear.

Failure pattern A is also quite intuitive. It is the same as pattern B, but with the failures from manufacturing and installation incorporated. Your training shoes may wear out in time, but if they substituted happy thoughts for glue you will see them fall apart almost immediately.

This high rate of initial failures is certainly present in feders. Think back to all the times you can remember when a feder broke, and you will probably realize that a new sword is far more likely to fail in the first month or two of use than in the entire following year. 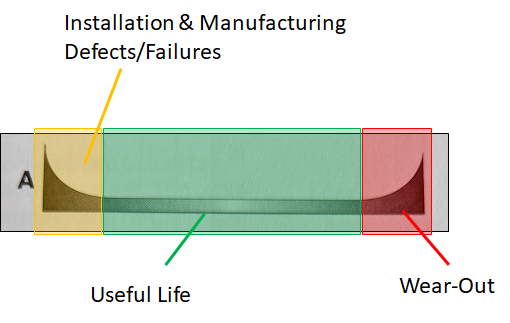 This is more realistic than failure pattern B, but this model still doesn’t represent the majority of equipment failures out there.

For the purpose of this article we can consider the last 4 failure modes to be close to the same thing. They represent failure patterns which are more or less age-independent.

This may seem crazy, but it is well documented. For instance a cylindrical bearing that has been in use for two decades is just as likely to fail as one which was installed a month ago. In fact the failure is less likely than for a new bearing, as you don’t have to worry about probability of initial failure due to installation/manufacturing. And, as the aviation industry discovered in the 60s, the vast majority of failures actually conform to these patterns!

Imagine that before each match you roll a 20 sided dice, and every time it comes up 1 a piece of your fencing gear breaks. It doesn’t matter how many matches you’ve had, 1 or 100. There is a 1 in 20 chance for your next match. (And you can’t choose to not fight when you get a 20).

This can create the appearance of things wearing out. In the above example, even though the chance in every single match is 1 in 20, the more matches the more opportunities you give that 1/20 roll to rear its ugly head. To our monkey brains, “more time means more failures” translates into “time causes failures”.

In HEMA terms, let’s imagine the failure pattern of your fencing pants. These are something that could certainly wear out, but let’s say you are in a school full of people who never file their swords and the edges are full of burs. In this case the odds that you will get a tear in the pants are, more or less, the same for every match you fence, but the odds that they will have torn increases with the number of matches they have experienced. It has nothing to do with the age of the pants. And you’ve never actually worn a pair of pants out, because someone always rips a chunk out of them first. Time to find some more considerate sparring partners!

To say that the failures are random and unpredictable is a bit of a misstatement. The point at which it starts to fail may be random, but that doesn’t mean there’s no warning between initiation and when failure actually occurs. A rotating bearing may exhibit a purely random failure pattern, but there are weeks between when this pattern kicks off and when it actually fails. During this time there is an increasing level of noise, vibration, and heat. All of which can be detected and the part replaced before it fails in action.

The trick is to know what exactly the real signs of failure are, and how long we have between them and the actual ultimate failure of the item in question.

Where do swords fit?

It may shock you to know that there has not been a sufficient level of research into sword breaks to precisely identify their failure pattern. But based on engineering intuition (not just me, I talked to other people too) it is far more likely to fit into the non age-related failure pattern.

The fact that we see a high rate of initial failures is self-evident. But the implications of this are often not realized. For instance, a feder that has been in use for six months is less likely to break than one that is brand new.

On the other hand, there doesn’t seem to be a ‘wear out’ point for swords. When they fail seems to have much more to do with:

And on the upshot, a takeaway is that you don’t have to live in fear of you cherished sparring sword packing up quitting on you, exhausted from it’s long life.

Cyclical loading is a phenomenon where something is loaded to below maximum stress over and over again. Even though each individual application of stress is not enough to cause failure, over time they will cause the material to fail. (This is particularly important in metals, as materials like ceramics tend to just hold or fail outright.)

(This plot is complicated and if you aren’t comfortable with statistics it will probably be an exercise in frustration.)