I was cleaning up my computer and I found yet more data that I had tabulated for my own interest. And then I remembered that time I threw some random data I found into an article and it became one of my most viewed posts. (How Did The Sources Say We Should Weight Targets?). May this article be judged as share-worthy.

The question of the day: What were the most common weapons in historical German martial arts? To properly answer the question we would have to carefully analyze period accounts to see what people were actually using. A comprehensive project of considerable effort.

Or I could just go to the Wiktenauer and start counting how often stuff shows up. Much like my previous work in counting sources, this wasn’t especially rigorous.

The process was as follows:

Now, this does lead to the possibility of selection bias. I contacted the Wiktenauer Director, Michael Chidester, about the subject. In his words, “Wiktenauer represents an attempt at creating a comprehensive catalog of all known fencing treatises. It’s only complete up through about 1550.” While the sources listed and the weapons included are comprehensive he does feel that if looking at translated sources there will be significant biases based on the interests of individuals who have contributed translations.

The only other note is that I double counted certain weapons if the document had works from multiple fencing masters included.

What You Are Here For 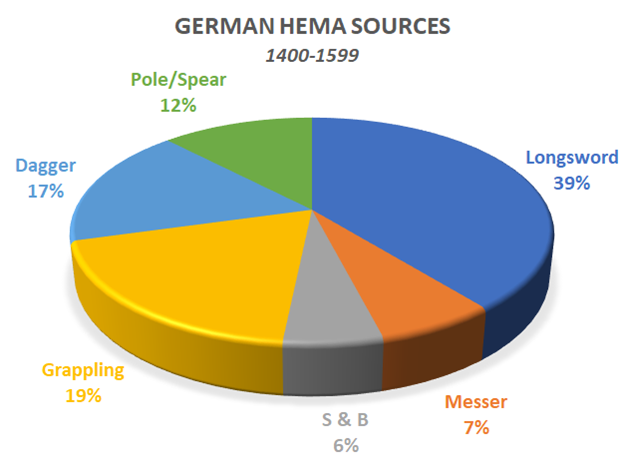 Longsword seems to be the hands down champion! Clearly the tournament scene should redouble its efforts to marginalize all other weapons! 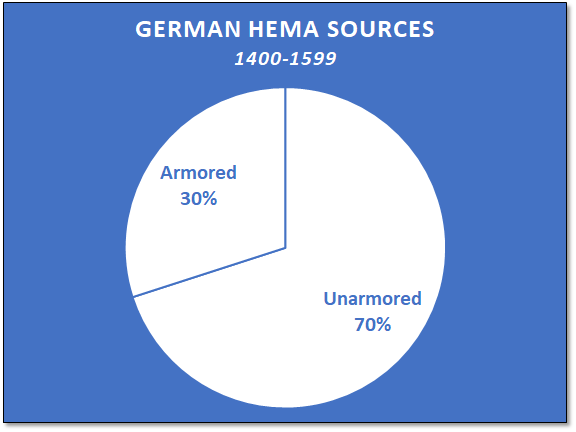 We can see that unarmored combat was the prefered topic for authors to write about. There isn’t much change in the amount of armored content written from the 1400s and 1500s, do with that what you will. 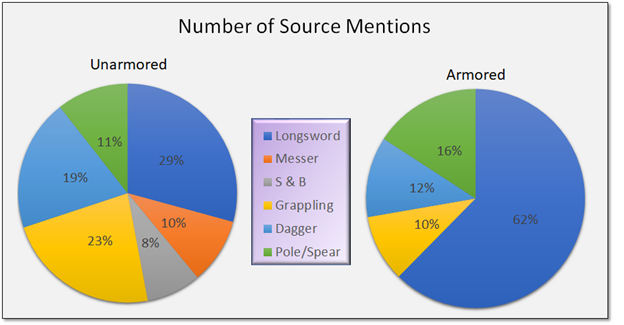 And if you thought that longsword was important before, have a look at this! Clearly historical authors thought that writing about longsword fighting in armor was the most important thing to write about in armor. Interesting, as defeating opponents in armor is definitely not the task that the longsword is designed to handle. 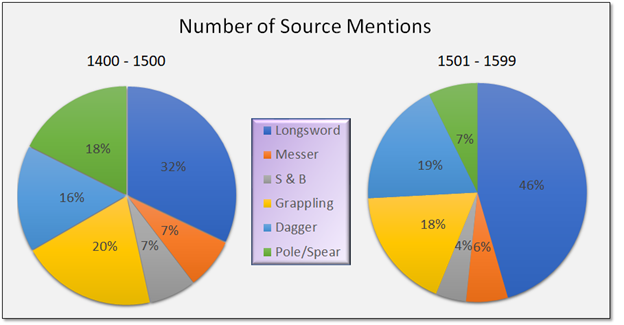 What can we see from this?

This is an interesting observation, as we know that pike formations were gaining prominence in the later period and longsword was losing its position as an actual weapon of combat and becoming more and more sportive in application.

No conclusions, draw what you want from these. 😉