This article was inspired by the discussion surrounding the edge alignment of a strike recorded on video on a tournament somewhere. Now, I am not singling out anyone in particular, I don’t even know who this is. The fencers, tournament location, etc are unimportant. (For simplicity I will simply refer to Fencer Left and Fencer Right.) It’s about the ability to see if the edge did, or did not land with good edge alignment*.

This is the exchange in question:

Looking at this hit, even at full speed, my instant reaction is “Flat”. No need to even think twice.

As a coach, when I watch test cutting I need to detect edge alignment issues which are only a degree or two off the cutting plane. A cut that is almost a full quarter turn off jumps out even if I’m not actively looking for it.

Which then shocked me that some were arguing that it was difficult to tell, or that felt that it actually landed on edge. Even when viewing the slow motion or some screen capture!

The purpose of this is not for a big public “I’m right” celebration. I can do those in private. My goal here is to offer some community education on when hits can be objectively seen as flat, and what to start looking for to increase your eye’s ability to see these things.

*For what it’s worth I believe this is from a tournament that does not enforce edge alignment. So this article has nothing to do with if the strike should or shouldn’t count. Just if the edge was, or was not, in good alignment.

To analyze the edge alignment I will be using a geometry/trigonometry technique called projection.

For each of the relevant impact frames I measured the projection of the cross guard to get an idea of the approximate angle of the blade.

When I do the math and plot the number we get the following graph: 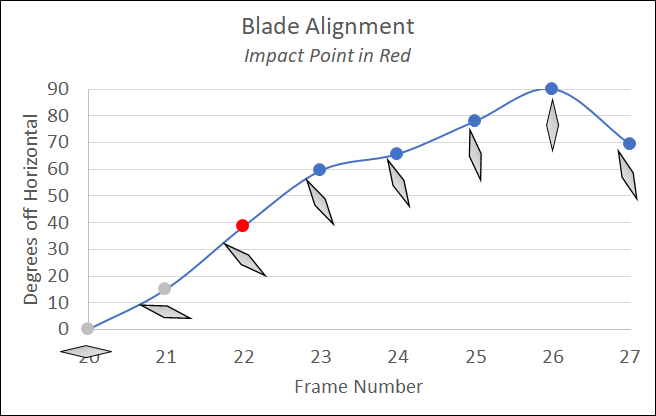 This shows that the fencer’s blade was essentially twisting the entire time, at no point was it maintaining any sort of edge alignment. The blade did a full quarter turn in a little bit over a third of a second!

Note that the pre-impact dots are grey because I was not able to actually measure the projection. At these angles the cross guard is too flat and I can’t clearly see where it starts and stops without an extremely high resolution video. The marks represented my best guess looking at the frames by eye.

If you don’t believe my crazy math, you can simply look at frames 20 vs 26 for yourself and clearly see that the sword has twisted quite a bit. 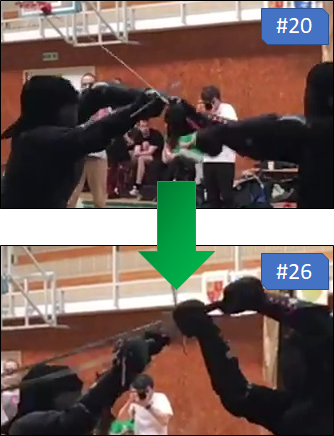 Another way to think about edge alignment is to look at the angle of contact and work backwards. This was described as a “short edge cut”, so let’s have a look a what a short edge cut delivered at that angle should look like.

At the moment of contact the sword is at roughly 38° to the horizontal plane, as shown in the picture below. The green line traces this 38° degree backwards to where the cut would have had to start in Frame 19. This shows just how far the sword would have to have been out to the side* to have followed a cutting plane to impact. Instead it looks like the sword was plopped straight down onto the head, as indicated by the red line.

*If you are confused you can think of it as out to the left of Right and to the right of Left. Right? 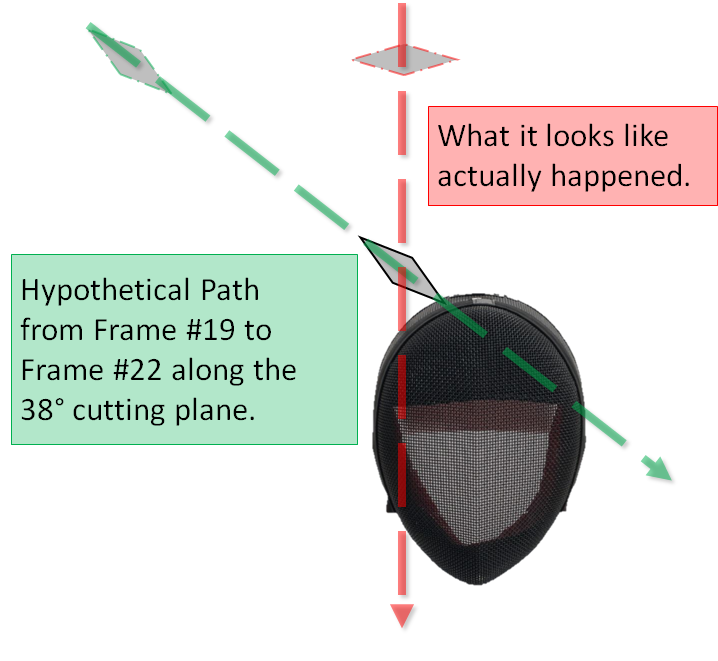 Look at the clip again. Does it seem like Right swept their sword that far out to the side? Of course not. We can’t see the exact angles, but it is very clear that the blade is mostly moving downwards and not side to side.

Naturally matches will go verrrrry slow if we have to stop and do this much math for every single exchange. The point isn’t that we need to analyze each exchange in this much detail, but to break down what you should train your eyes to look for when evaluating edge alignment. As I said in the opening: to my eyes this might as well have had a neon sign on it flashing ‘FLAT!’.

The best strategies you can use are:

Once you get practiced at seeing edge alignment it is actually not all that difficult. With experience you begin to take it all in subconsciously, rather than having to concentrate like you do at first.

Crazy that it works like acquiring any other fencing skills. 😉