Dealing with both competitors simultaneously striking each other is the bane of fencing tournament design in any discipline. In HEMA there are a number of different approaches to deal with the issue, one of which is the Double Hit. The double hit assigns no judgement as to who was or was not at fault, and simply identifies that both fighters struck each other “simultaneously”. A common accompaniment to the Double Hit is the Double Out, where after a certain number of double hits in a match both fighters will be considered to have lost.

The exact rationale for this is a little out of scope for now. It’s a complicated question with a lot of moving parts. But suffice to say something as harsh as a double loss for both fighters has people with firm opinions on the practice. Some argue in favor of the double out, in that it is a way to introduce negative-sum elements into the match and without such a penalty there is no reason not to double. Others argue that it is a poor design practice in that a single fencer can, through their choices, force a negative outcome on both parties.

This article isn’t to hash through these arguments. Why I am writing this is because there seems to be a new trend among opponents of the Double Out rule, to claim that the practice of tournament double outs causes people to worry about doubling so much that they double more. And removing Double Outs actually leads to fewer doubles.

If I needed a textbook example of motivated reasoning, this would probably be the one. But slinging back and forth claims of a more logical argument is not science, in fact it is about as anti-science as you can get. Science likes data. And I have data. Data I will use to call bullshit on this made up “fact”.

So what data is available? Obviously we don’t have controlled experiments to study, so the best we can do is look at existing tournament records. All tournaments work a little differently, so they don’t necessarily have an explicit “Double Hit” as a scoring action. I did a search for longsword tournaments which had at least 1 “Double Hit” indicated in the HEMA Scorecard database, and was able to come up with a list of 71 events, and a total of 42,026 exchanges (not all the tournaments used afterblows, so all analysis is on “double” and “clean” flagged exchanges).

Wow! Not only does the claim of “removing double outs lowers double hits” fall flat on its head, we see a very clear trend in the opposite direction. Though this plot still begs two questions:

I’ll answer #2 first: because people keep asking me if there is something that they can share when people make this claim. Hopefully someone will find having a self-contained plot helpful. To answer question #1 we have to think a little bit about how to get this data in the first place. (The rest of the article will be about data mining techniques, so you can leave now if you just wanted to hear me get worked up about people making up stats.)

It is very easy to calculate the double hit percentage:

The hard part is determining if a tournament does, or does not, have a double out rule. If you see a match ended on a double out, then you can be pretty certain. If you see that no matches doubled out, you don’t know for sure. It could be that there were no double outs, or it could be that people were doubling so infrequently that a match never got to the double out point. 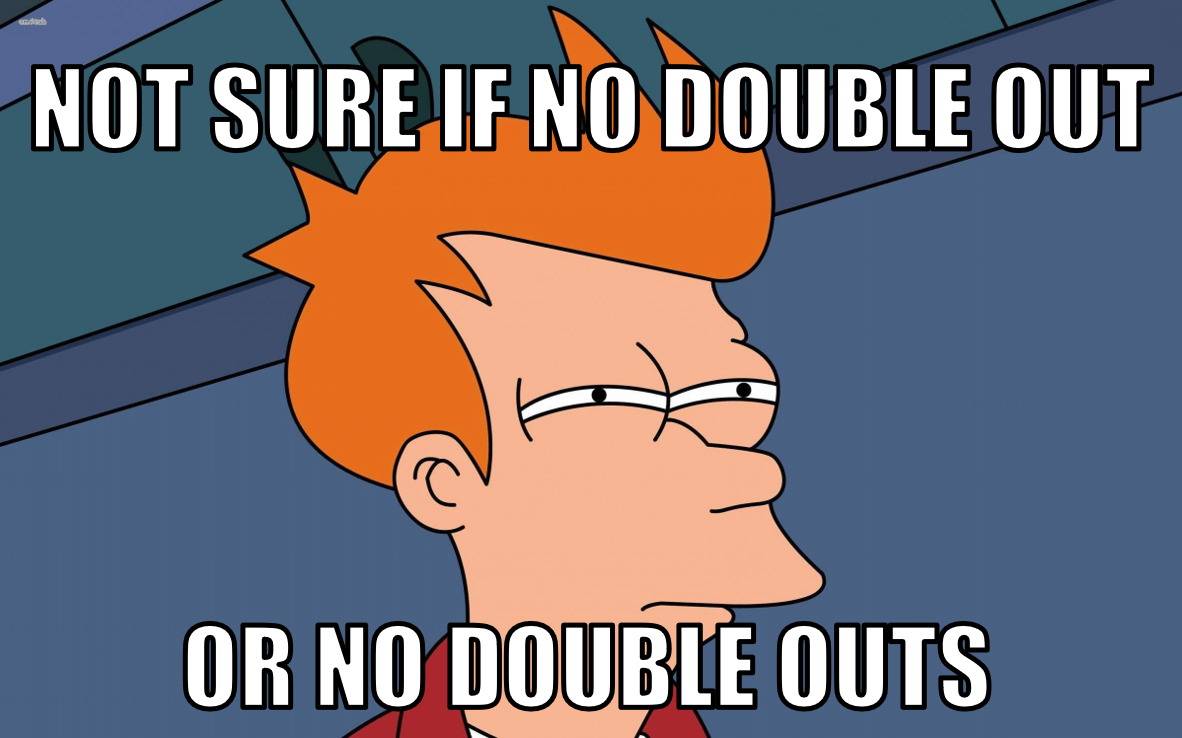 I already had to do some data pruning with the knowledge I had available. Over and above what the data returned I:

This leaves, I’m sure, a lot of tournaments with double out rule still counted in the no double outs column. But the purpose of this investigation was not to determine the exact ratio for each, it was to see if the claim had any validity. And it is exceedingly obvious it does not, even with a bunch of extra data stacked in its favor.

There are plenty of valid reasons why you can not like double outs from a game design point of view. Elaborate on these points and work towards whatever your vision is. Just don’t make stuff up and parade it around like a fact that supports your position.

Here are the events which I took data for. This is based on longswords only.