Finding scientific articles on sword cutting can be a difficult task. There tends to be two types of article:

And unfortunately a sword swing fits right in the middle. Take a quote from one of the more referenced studies on the physics of cutting:

“Finally, to investigate the effect of cutting rate on the proposed sharpness index, cutting experiments were carried out at higher loading rates using SM blades and PU substrates. In a previous study [31], a surgeon carried out a cutting demonstration with a scalpel blade and a surrogate skin substrate and it was found that a typical rate for cutting abdominal skin was approximately 1800 mm/min. While it was desirable to carry out cutting trials at this speed, current testing resources could only achieve a maximum cross-head velocity of 500 mm/min. Hence for this study, this rate and half this rate (i.e., 250 mm/min) were used to investigate the effect of cutting rate.” [1]

Now, this is all well and good until we realize that a sword is going to be over 1,000,000 mm/min when it hits the target! Regardless there are still some things that we can learn from some of the scientific publications on the subject.

(Note that the physics behind a cut and thrust are the same, a cut just involves a much higher surface area – being that you hit with the edge rather than the point. Stress is force divided by area, ergo the higher surface area of a cut leads to a lower contact stress between sword and target. Which is why it requires more skill/effort to cut deeply than thrust deeply. What is Force Dispersion? And how it keeps you safe from swords)

What are we seeing? Essentially the cut has two phases. The first phase is surface penetration (a), where the blade has not cut into the target yet. The surface is being pushed inwards by the blade, and we see the force continually increasing as you push further and further. At this point the force profile between a sharp and dull blade is more or less the same.

Eventually the stress on the blade edge exceeds the shear stress of the material being cut, and the sword enters the cutting material (b). This is the second phase of the cut, and from here on the force on the blade is more or less constant – assuming that the blade doesn’t twist in the cut, which is a big “if”.

This steady state force will be equal to or less than the peak force of the initial phase. In ballistics gels – a preferred target for scientific studies – the results resemble Type I. However, if you’re cutting a water bottle you will have a much higher stress getting into the bottle than continuing the cut through: typical Type II behavior.

The force profile is also dependent on blade sharpness. As a blade dulls it will require even more energy to start the initial cut, but in the steady-state internal cut phase there isn’t much difference. 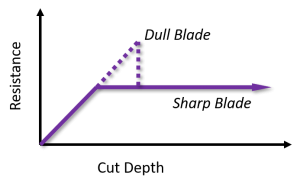 So, why does the force flatten out when we enter the target? What makes this so-called “internal cutting” phase special?

Once the sword has initiated a cut into a target it will act as a wedge, opening the target in front of it. 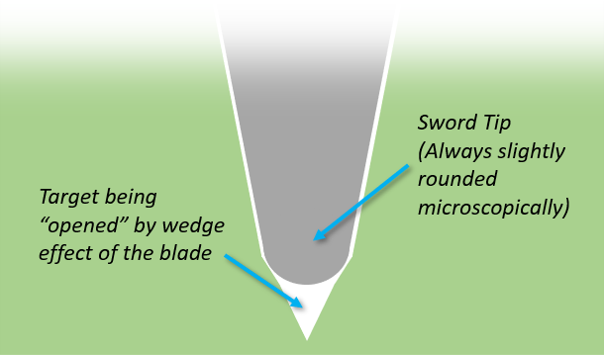 Note that in most cases there won’t be a true void in front of the blade, however the stress caused by the wedging action will be added on top of the force of the blade tip. This makes the cut easier, in the same way that cutting into a target under tension is easier than a target which is free to deform. (Hanging Targets is Cheating!)

When using a uniform test medium like ballistics gel, it is easy to distinguish the two phases of the cut, external and internal. However it is not so simple when looking at cutting targets employed in HEMA. When cutting through a rolled tatami mat there is actually very little internal cutting going on. Each strand of tatami fiber is an entity unto itself. The blade must pass through the external phase with every single fiber, instead of just once at the start of the cut.

A human body would be somewhat of a mixture. The skin is undoubtedly tougher than the tissue it is covering. However your internal structure is far from homogeneous, with muscle fibers, nerves, membranes, and bones (and fat!). I have yet to find any studies on how the heterogeneity of cutting materials affects performance, so at this point it is a huge question mark.

Slicing, in this context, is when a lateral component is added into the mix. Instead of the blade just pushing into the target it is sliding along it. What we see is that slicing lowers the force required for the external phase of the cut, but doesn’t make a lot of difference in the internal phase. In the plot below we see the black line as no slicing, which requires a large peak force to break through the surface and enter the steady state cutting region. Slicing requires much less peak force, however once you enter steady state cutting the level of force between the slicing (red & blue) is comparable to the black.

This means that using a slice you can generate a cut at a level of force that wouldn’t have otherwise been sufficient to penetrate into the target. An obvious fact when looking at your cutting board; drawing the knife across the fruit* allows you to cut into a tomato rather than squashing it.

But we have to be careful before we, like some have, over generalize to assume that this is how swords should be used. A knife is shorter than a sword[citation needed], and basic leverage dictates that the longer a lever you use, the less force you exert. 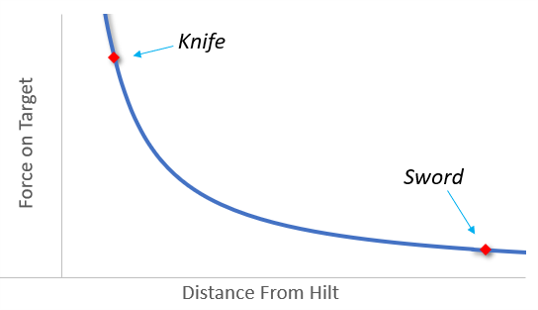 In addition, the amount of energy that you can impart into a sword prior to impact is orders of magnitude higher than that of a knife. So the comparison between pressing a knife onto the tomato vs slicing it is like comparing… (I think there is a tomato/tomahto/apples/oranges joke here, but I don’t have it).

Editor’s Note: Anyone who never learned the difference between cutting and squashing tomatoes has some serious catch-up to deal with!

A further in depth study of the use of slicing in cutting is still pending, so for now listen to the experts who actually go out and cut stuff. (In reality a pure press cut without a lateral component is mostly impossible with a sword. There is always some lateral movement owing to the blade’s rotation.)

*Botanically speaking tomatoes are undisputed fruit, however the 1893 US Supreme Court Case “Nix v. Hedden” ruled that, because it was common to refer to them as vegetables, they would be considered as such for tariff purposes.

Cutting with swords is still a field which has not had an abundance of serious research, for reasons I can’t possibly fathom. I’m fairly sure that it is as important as surgery and industrial processes.

And, alas, this means that we can only start drawing a few dots back to our own practice, rather than understand sword cutting wholesale from existing research. But for now, let’s hope you are a little more educated than when you started reading.

[1] McCarthy (2007) – On the sharpness of straight edge blades in cutting soft solids: Part I – indentation experiments