I was at a tournament (years and years ago) where one participant claimed that they were deflecting cuts by swinging their off hand into them and “batting them away on the back side of the blade”. They insisted that this was a completely legitimate defensive strategy.

The judges wisely disagreed and kept calling that they were getting their hand cut. And life went on. But, since it popped into my head again, let’s look at the claim from a physics point of view.

(For more background on vectors you can read my article Force Vector: More than a science-ey sounding name.)

If you plan on batting a sword out of the way with your off hand it kind of looks something like this: 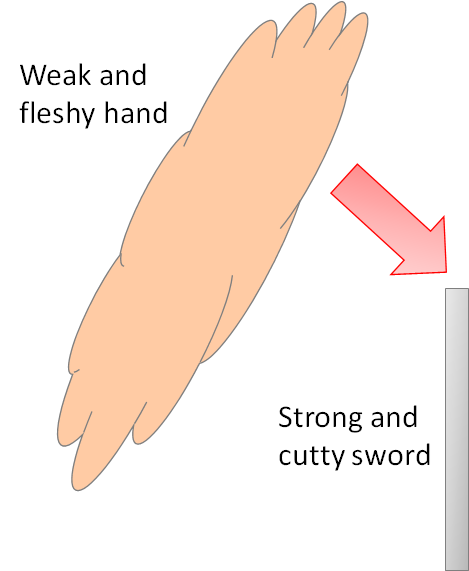 This makes sense if the sword is just sitting there. And it is well documented that you are able to grab or displace stationary swords with your hands.

But if the sword is in the process of cutting you it isn’t exactly stationary.

That diagram seems to make sense, until you realize that we used two different frames of reference*. The velocity arrow for the sword (blue) is relative to the ground. It is what we would consider ‘speed’ in an objective sense. The hand, on the other hand**, is pictured relative to the sword. To be accurate we have to illustrate both speed vectors in relation to the same frame of reference.

*Grasping the fundamental concept of “frame of reference” is a basic requirement before you can do anything with kinematics. I’ll try to spare you from needing a super firm understanding of it. 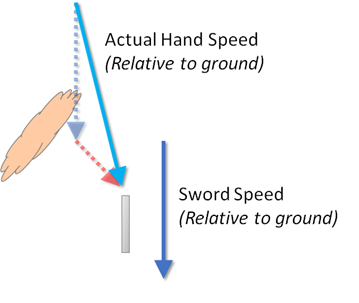 You can see that in order for the hand to strike the backside of the sword (dotted red arrow) it has to be moving faster than the sword in question (dotted dark blue arrow). Dotted red plus dotted blue equals solid light blue, ie faster than the sword. But instead of adding vectors, you can think of the following: If you want to slap a ‘kick me’ sticker on the back of a mounted knight’s head you need to match the speed of his horse first. 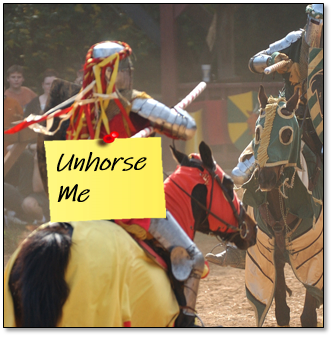 Does the situation improve if we aim to hit the flat of the sword instead of the backside?

We still have the same problem. The sword is just something that moves much faster than the hand. That’s kind of the whole point of swinging a weapon.

If we swing the hand directly into the flat of the sword we end up with something like this: 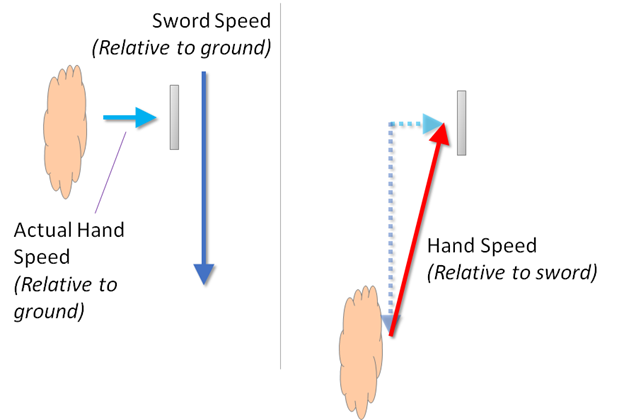 Hitting the flat of the sword seems like a much less realistic scenario when we look at the direction the hand would actually be approaching the sword from.

How Fast Do Hands Move?

You may recall my article How Fast Do Swords Move? – Try 1. In it I clocked a fairly relaxed cut on tatami at about 20 m/s at the point of impact. Using a similar approach I tried to clock my hand.

Simply trying to punch out and slap a hypothetical blade, I was looking at a peak speed of about 5 m/s. (I’ve never trained this motion, or do much of punching in general. So this could probably be sped up a bit.) I also tried to get the most extreme case, and did an arm circle as fast as I possibly could. This produced about 10 m/s, which I think represents the theoretical maximum here.

So in the best case scenario I’m looking at about 25-50% of the speed of a sword blade with my hand.

Batting a cut out of the way with your hand isn’t really something that works. While you may think you are moving your hand to the back or side of the blade (and you would be if the blade was stationary), the fact is that the speed difference between the sword and the hand are much too big. And if the sword was moving considerably slower it wouldn’t be much of a threat to you from a cutting point of view anyway.

While most of you are smart enough to not try this, there is a more common violation of this principle. A lot of times when people have interpretations that involve performing a beat against another person’s cuts, they plan on being able to move in a way where they can somehow come around to the backside of a moving cut. This is impossible unless you have your sword moving towards you faster than the opponent’s cut is. Which is also highly unrealistic.

Moral of the story, try not to get your hand cut off. 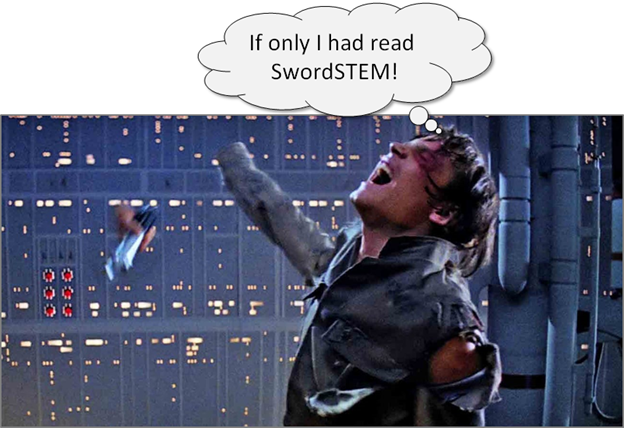