It’s not uncommon for someone to talk about how they use the wrist to gain extra speed in a cut, or use grip switches to gain more tip velocity. These things, quite frankly, don’t work at all. They either mess up your cuts, or act as placebo effects. And here I illustrate why.

This is all predicated on the idea that having a strong and stable structure to support the sword is necessary to produce a good quality cut. This connection is what allows you control over things like edge alignment and blade stability, and is one of the most important things in having the sword be able to cut.

I’m not going to waste any more time talking about that here. If you disagree then perhaps you can enter a cutting competition and show all the best cutters why the consensus they have all reached is wrong? 😉

First Up: Explaining my crappy drawings.

Talking about these things online is often difficult. So I’ll start by explaining exactly what I mean by accelerating the wrist. I’ll be using this handy schematic to explain all the movements: 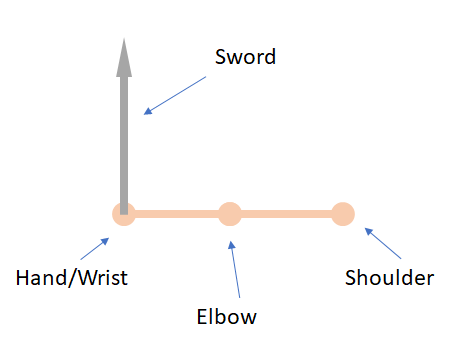 First things first, I’m going to completely ignore elbow movement. In this model we are swinging with a completely rigid arm. By the time I get to the end you will see that all the points I make about the wrist also hold true for the elbow.

Secondly, I’m going to depict the ‘correct’ impact position with the sword perfectly parallel to the arm. Having the sword completely in line with the arm is not realistic, it is a model I am using to make the illustrations clear.

(This position doesn’t work well anatomically. If you do such a thing with a real sword it means a bad position for your wrist.)

Second Up: Explaining What I’m Talking About

So, to be clear, I’m ignoring any sort of complicated fencing actions. This is going to be explained using the simplest motions possible. Once the concept is understood it, then you can start to see it applied in different contexts.

This is a simple rigid arm chop down.

There are some who advocate that you can get a higher tip speed by adding in a rotational acceleration at the wrist.

From a pure physics point of view this makes sense. By adding rotational acceleration at multiple joints, you get the effect of them all added together. Simple enough. And by simple enough, I mean a math person’s definition of simple enough.

Why It’s a Bad Idea

More tip speed is generally a good thing. So how can this be a bad idea?

There are three ways you can get the sword accelerating about the wrist joint:

Just about everyone in the sword community should know by now that it is a bad idea to hyperextend your wrist. This has a lot of potential for injury, especially with the amount of force you are putting on it from a powerful cut.  And even if you hate your body, a hyperextended wrist is an inherently weak position.

2 – Shifting the sword in the hand.

By squeezing the pinkies (or possibly other crazy magic) you can have the sword shifting its position in your hand and accelerating the tip.

Squeezing the pinkies is a well established cue for fighters to improve their cutting mechanics, so it might seem weird that I’m calling it bad. It’s because that’s not exactly what’s going on here. The topic gets a whole section below, so hang tight.

This… is a terrible idea. But it will technically generate an acceleration of the sword in relation to the wrist. (Slowing down is also an acceleration.)

When impacting your target you want the whole structure to be solid, so that you have control over the blade. If you are going to squeeze the pinkies when you are making a cut, ask yourself: Do you want your grip in the process of closing, or fully closed, when you make contact with your target? It’s a fairly easy answer. We want our grip on the sword to be closed and firm when we make contact. Anything less compromises our ability to control the blade.

The same thing applies to moving the wrist. Do you want your wrist to be in a more fluid state, or do you want it locked in to a strong position before the cut?

You Can’t Have Your Cake and Eat it Too

So, the answer may seem obvious. Use an acceleration at the wrist to boost the sword’s speed, and then lock it in right before impact. Unfortunately — as you will see below — that’s physically impossible.

Let’s take a look at how the sword speed looks through the cut.

In instants 1 to 4 we see the arm-sword rigid system accelerated to the target, and afterwards it starts to slow down.

If we accelerate the wrist through the cut we get higher speed, due to combined acceleration of the shoulder and wrist.

But we don’t want to do that, because the structure becomes all loosey* and weak. Note that the same thing applies if you wait just before contact before starting to accelerate at the wrist. We are working at a conceptual level.

So to solve this you might have the brilliant idea of accelerating at the wrist, but then locking the structure right before impact. 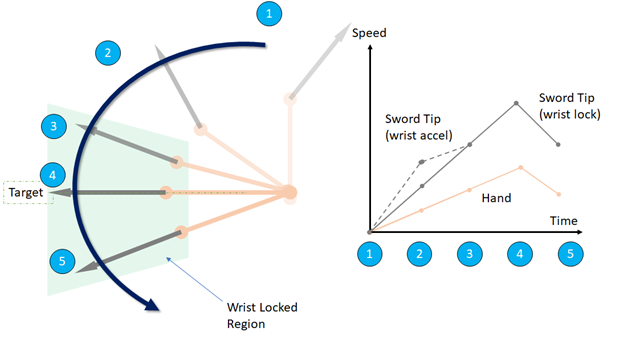 It’s getting a little bit messy, so I’ll explain what we are seeing here.

You CAN NOT have acceleration at the wrist and a locked structure at the moment of contact!

THIS ARTICLE JUST APPLIES TO THE “ACTIVE” CUTTING PHASE

I’m going to put that in red. Because I am not saying that the sword should never be accelerated around the wrist. I am saying that you can’t use these wrist accelerations to increase the tip velocity of the cut. This example illustration is a straight 2-D chop; in actual sword fighting you are doing very complicated three dimensional movements. There are many wrist/grip things involved in getting to the ‘locked’ position in the quickest amount of time using the least amount of space. But they all have to sort themselves out before you actually enter the locked-in/active-cutting part of the motion.

What do I mean by “many…things”? SwordSTEM isn’t about teaching you how to fence, just the physics behind it. 😉

Further notes, extrapolations, and disclaimers for people who miss the point.

Everything I said about accelerating at the the wrist applies to the elbow as well. You can’t generate extra blade speed by having the elbow extending, while at the same time maintaining a good connection between your body and your sword. The connection will be weak, your sword not fully supported, and your edge alignment out of control.

Same for our old friend (enemy) push-pull with the longsword. The concept of the push-pull motion works exactly the same as accelerating the wrist. You can gain speed at the expense of stability, but you can’t gain extra tip speed with a locked structure. That’s not to say that you can never use it; if the tip is ‘behind’ the core you are going to need some sort of motion to get it to catch up.

As I’ve said multiple times, this is a snapshot of just the ‘cutting’ phase of the motion. Fencing involves a lot of complex actions, with the sword moving in a lot of different ways. The point here is that you can’t gain speed from accelerating the wrist without compromising the structure of the cut.

When I published Physics, Push-Pull with the longsword, bad cuts…. and you! some people got bent out of shape arguing that there are times when push-pull could be acceptable, like moving the point online or feinting. AKA: my advice about how you needed to move while trying to deliver a debilitating cut doesn’t apply when you aren’t trying to deliver a debilitating cut…