“Survive the pools and then fence in the finals.”

This is a phrase that sometimes gets tossed around. Many experienced fighters will bemoan fighting aggressive novices, as it is really hard to execute any good work when someone simply swings wildly at you. The perception is that you have to deal with these double-prone fighters in the pools before you can enjoy cleaner fights of higher caliber in the elimination brackets.

But is this actually the case? We all know that pool fights can be very messy. But so can elimination bracket fights. While I can’t speak for ‘quality’ of fencing, I can have a look at the number of double hits!

In investigating, we turn to our old friend Bilaterals per Exchange. This is a measure of what percentage of exchanges end up with both fighters hitting each other, be it a double or afterblow. By lumping these two together, we can compare across tournaments with different rulesets more easily. 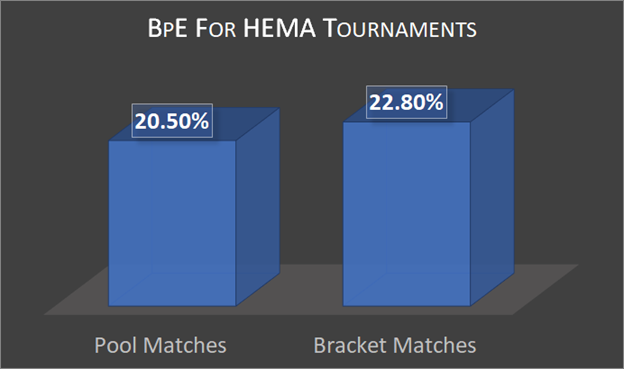 Based on this, we can can see that pool fighting is not doublier than bracket fighting! If anything, the brackets are slightly worse. (Though not by a significant margin.)

So that should be enough to put this myth to bed. But I think I have to keep you entertained for another 800 words or so.

How does this stack up looking at different weapon sets? 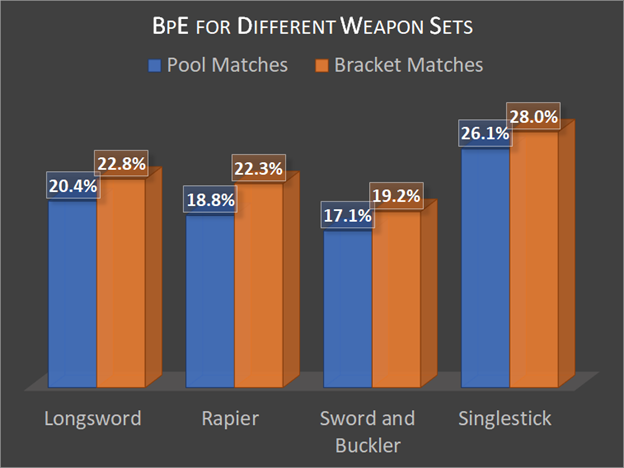 In every case the elims are higher!

For the most part, there isn’t much weapon difference here — but why tell you when I can show you using a pretty picture.

So the elims are usually 8-18% more ‘doubley’ than pools. We get a difference between weapons, which I’m not sure is significant or not. Rapier/Sword&Buckler/Singlestick all have FAR fewer exchanges recorded than longsword.

What does it all mean?

So why do many experienced fighters feel that the pool matches are messier?

Another explanation is confirmation bias at work. Perhaps the stage of a tournament affects a fighters perception of the double? When they take a double hit from an inexperienced fighter, they attribute this to their opponent being inexperienced and/or reckless. When a double is received from someone closer to a peer in an elimination match, it is more easily shrugged off as being ‘bad luck’. Or not remembered at all due to a high focus on winning the match.

Naturally, these are difficult things to examine in raw statistical data. But the next time you hear someone talking about how pool fighting is doublier than elims fighting, be prepared to bring out your inner know-it-all!

(Ok, so there wasn’t much to this article. But I thought it was an interesting topic when I started, and I still do. Since I failed in my promise to keep you entertained for over 1000 words here is a picture of a stick man getting hurt. You guys seem to like that.) 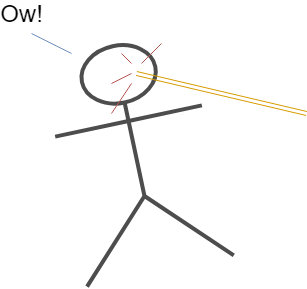