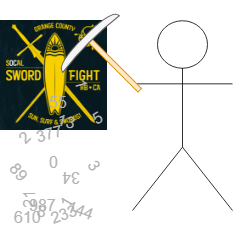 This article is a cursory summary of the overall results of the SoCal Swordfight Longsword tournaments over the last three years. One must be careful when drawing too many conclusions from this data — likely there is enough random variation to make all but the most significant trends meaningless. In many cases, what is most interesting is not what changed, but what did not change.

The data is a lumped combination of all the different longsword tournaments held at SoCal Swordfight events. It will also (hopefully) be an interesting experience for you to compare and contrast with the CombatCon Longsword tournaments, which originally had the same rules but have evolved in a slightly different way. Data Mining – CombatCon Longsword.

More or less I didn’t address the following in my analysis:

Point Averaging: When faced with judges calling for a 3 point and a 1 point target, the director will average the two scores into 2 points. It is believed that this occurs seldom enough, and is evenly distributed enough, that it does not constitute a significant distortion of the results.

When SoCal moved from a November date to a February date it skipped a year. There was no SoCal 2016.

The following ruleset was used at multiple events in 2015, including SoCal. The results of all three events are combined to give the baseline statistics. 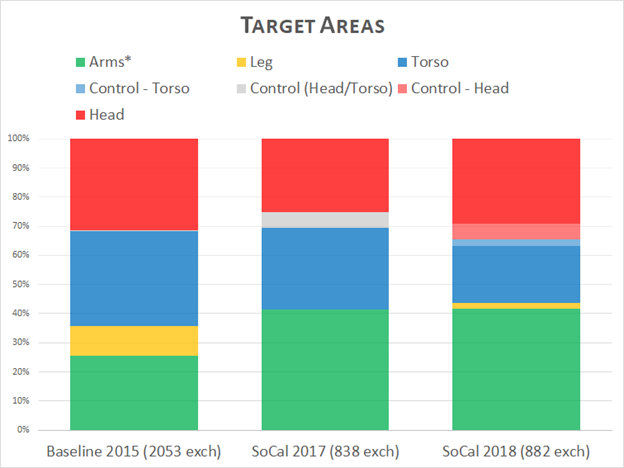 The data from SoCal 2017 is a little more difficult to interpret, as both the arm strike and the leg strike were worth 1 point and lumped together (in the plot they are both in the ‘Arms’ group). However, the data shows that at SoCal 2017 there were more points awarded to this region than both Arms and Legs combined in 2015.

Given that that Legs were worth less points, and the prohibition against direct Hand targeting was removed, it is likely that the legs were hit as much or less than the baseline, and the arms were hit significantly more.

The 2017 rules had the head as a relatively higher value target in comparison to other targets. In addition the target area of the head was increased.

This data allows us to separate the arm and leg strikes. The total of these two attacks combined are similar to the levels in 2017. The extremely small percentage of leg strikes supports the hypothesis that in 2017 the 1 point targets were primarily attacks to the arms.

This also shows that when the legs are not given a point advantage over targets like the arms, they are very seldomly targeted — a conclusion which is in line with what source materials advocate in technique.

Despite the organizers’ best efforts to incentivise Head targeting, there is still not an appreciable increase over the baseline. Based on the 2018 changes and the results produced, it’s not possible to rule out any of the explanations given in the 2017 section.

The number of control points achieved against the head and torso increased from 9% to 13%. This could possibly reflect an increase in fighter skill, or could simply be a random fluctuation.

In 2018, fighters were able to be awarded a control point on top of any scoring actions. This was not widely used, with only 1% of attacks to previously non-controllable targets receiving control points. Because of this I conclude that the effect of this change is minimal.

It is also a possibility that fighters are not in the habit of training/attempting techniques like Hand Pressing in tournaments, and did not possess the skills necessary to exploit the rule change. This is a variable that should continue to be monitored. 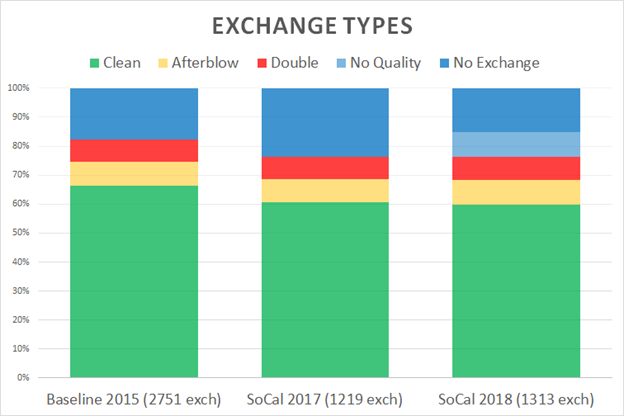 Over the three tournaments, the BpE* remained fairly stable between 19 and 21%. Currently there is not a wide-spread use of BpE, and it is difficult to compare to events around the world. Based on my experience (running different events/grabbing score sheets where I can/tallying points on live streams), these numbers are as clean as, or cleaner than many other longsword tournaments.

In 2017 the number of No Exchange calls increased sharply, a trend which was observed in many West Coast events at the time. It was speculated that this was more likely the result of increased judge skill in detecting insufficient cuts, rather than a reduction in the judges’ ability to determine the exchange. As a result a new call, No Quality, was added to the score system in an attempt to quantify the two.

As was mentioned in the introduction, it is not possible to draw many hard conclusions from this data. Here are a few items that stand out, but there are still questions as to why.