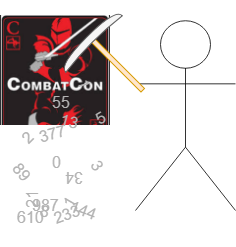 This article is a cursory summary of the overall results of the CombatCon Longsword tournaments over the last three years. One must be careful when drawing too many conclusions from this data — likely there is enough random variation to make all but the most significant trends meaningless. In many cases, what is most interesting is not what changed, but what did not change.

The following are *mostly* not addressed in this analysis:

Point Averaging: When faced with judges calling for a 3 point and 1 point target, the director will average the two scores into 2 points. It is believed that this occurs seldom enough, and is evenly distributed enough, that it does not constitute a significant distortion of the results.

The following ruleset was used at multiple events in 2015, including CombatCon. The results of all three events are combined to give the baseline statistics. 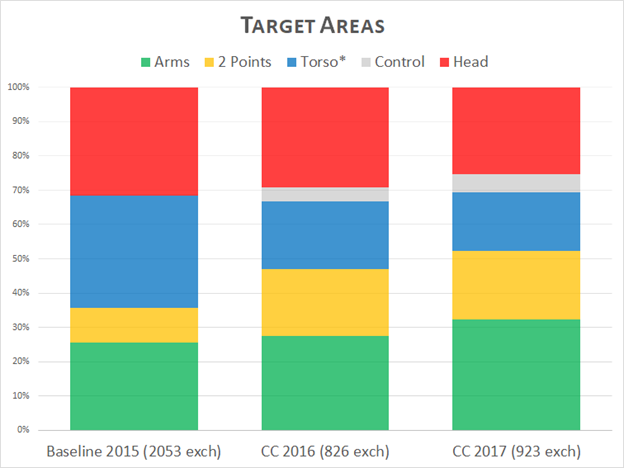 The data showed only a small decrease in the number of 4 point attacks delivered. In 2015 this represented the cuts and thrusts to the head, whereas in 2016 this represented only cuts. Possible explanations are:

There was a significant reduction in the number of 3 point attacks delivered, and an increase in 2 point attacks, which correspond almost 1:1. A plausible explanation is that fighters did not alter their behavior significantly in regards to attacks to the torso, despite the different point values.

Given that the points awarded for control were delivered for strikes to the head and torso, and combined with the earlier discussion, it seems highly likely that there was little change in participant behavior between 2015 and 2016.

From 2016 to 2017 we see a continuation of the same trends. The most notable difference between the two events is that the number of Arm strikes increased, at the expense of Torso and Head cuts. A possible explanation is that as fighters continued to increase in experience they made striking deep targets more difficult, causing more attacks to land on extremities.

It is also possible that this is simply a random ‘noise’ variation. 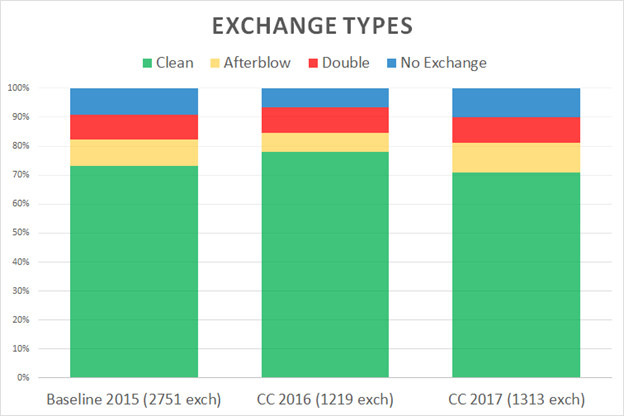 Over the three tournaments, the BpE* remained fairly stable between 17 and 21%. Currently there is not a wide-spread use of BpE, and it is difficult to compare to events around the world. Based on my experience (running different events/grabbing score sheets where I can/tallying points on live streams), these numbers are as clean as, or cleaner than many other longsword tournaments.

By and large this information doesn’t show any significant trends over time. The overall distribution of calls is fairly similar year to year, and none of the indicators indicates any problems with how the event is developing.