Occasionally you see a tournament pop up which has a ‘First Blood’ rule. This means that the first fighter to score in a match receives a bonus point. There are a variety of stated rationals for this. They all pretty much boil down to encouraging more tension leading up to the first hit, while the fighters are under higher stress against an unknown opponent. But even without adding extra points for the first exchange, it turns out it is a big deal for the final result of the match.

When I crunched the numbers on a data-set of 18,259 matches the fighter who scored first ended up winning the match 13,721 times, a 75% chance. So looks like the first hit alone is a pretty good indicator of how it will turn out.

Does it make a difference if we are looking at clean first hits vs afterblows? Intuitively we assume that a fighter who can get a clean first hit on their opponent displays a higher level of skill, and a clean first hit would be a much bigger predictor of who would win the match. 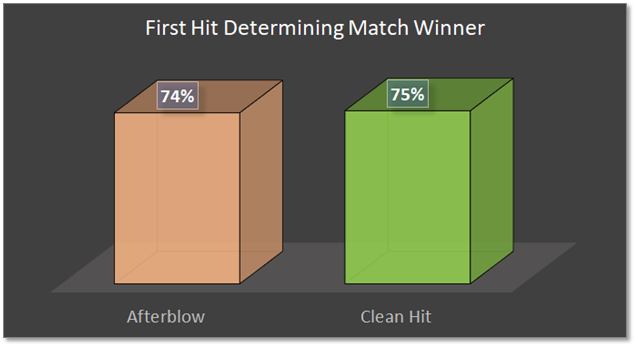 Not so much. Turns out that getting the advantage in an afterblow situation on the first exchange is just as much a predictor as getting the first clean hit.

(Note that this data includes Full-Afterblow tournaments, where ‘Afterblow’ often means ‘Double with one fighter hitting a more valuable target’)

Why do we see this? One possible cause is that there just isn’t enough time for the other fighter to ‘catch up’ before the match is done. In fact, some tournaments are only single hit.

The original first data set I showed included only tournaments with more than 3 hits per match (on average). So this filters out most low exchange tournaments. If you just search without limiting the eligible tournaments, then the number goes higher, up to 79%. Which is what you would expect if you add a bunch of tournaments in which the first hit directly determines the outcome.

But we can still dig deeper.

Is the First Exchange Special?

As I explained above, one reason the first hit may be such a good predictor of success is that the other fighter simply doesn’t have time to catch up before the match concludes. The other explanation is that it is simply an expression of the more skilled fighter hitting the less skilled fighter more often. As more skilled fighters tend to do[citation needed].

Let’s look at all matches, and see how often the match winner tends to hit the loser. 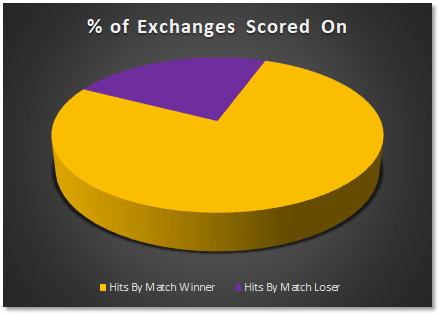 This is not a re-color of the first chart. The match winner, on average, lands 77% of the scoring hits in a match. Which is really close to the percentage of time the person who lands the first hit wins the match (75%).

It seems that we can close the book on this. However there is another fun observation I’ve come across.

I was expecting that we would see a bell curve in the percentage of hits the winner lands against the loser. But it is just the opposite! Most HEMA wins actually tend to be quite lopsided. 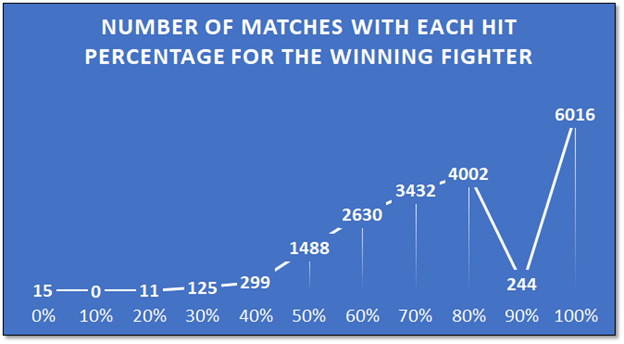 As for why there is such a big drop off at 90%? That is because in order to get there you need to have at least 10 exchanges, with the winner scoring 9 and the loser 1. There simply aren’t many formats out there where you can hit someone 8 times and still not have won yet!

(It is also fun to see that there have been rare occasions where a fighter was out hit 2-1 and still won the match! Clearly due to weighted scoring systems.)

#1 – The person who hits first is a very big indicator who will win the match.

#2 – The reason for #1 is simply that the better fighter lands hits more often, nothing special about the first exchange.

#3 – Apparently HEMA tournaments tend to be even more lopsided than we realized?