In my previous article, “Do Fullers Make Feders Take a Set?”, I promised you that I would take some data on production swords and back up the theory with data. My intent was to take measurements of a whole bunch of different feders at a few HEMA events, and build up a nice sample size of all manufacturers and models. And then COVID-19 happened and shut all the HEMA events down. 🙁

What I could do was grab a bunch of swords around my apartment and start measuring them and computing data. (The caliper is a new toy. I have to use it on something.)

What Am I Measuring?

I took two sets of measurements for each sword, one at the base of the blade and another 20 cm (8”) back from the tip. The 20cm was rather arbitrary; mainly I was looking for a standard place to get the ‘blade’ cross section.

The swords I measured:

Ensifer Feder (Ensifer) – Was sold as the ‘Standard’ when I purchased it in 2012, but I believe it is equivalent to their current ‘Light’ model. Has a rebuild custom hilt, which is why it doesn’t look so pretty.

Castile Rapier (Rapier) – This has their heaviest rapier blade.

Chlebowski Blunt Longsword (Blunt) – This is a sword from circa 2013, and I suspect the heaviest of the blunts he makes. It is extremely beefy in comparison to ‘standard’ Chlebowski blunts I have seen produced at the same time.

Albion Crecy Longsword (Crecy) – Production sword, not much to say.

Albion Earl (Earl) – This is an interesting sword, in that it is hollow ground. More on that later.

Cold Steel Hand-and-a-Half Longsword (CS 1.5H) – A very common sword for beginners to cut with. This one is old, 2012, and appears to be extremely heavy in comparison to currently produced CS Hand-and-a-Half swords. So these results should be used for interest’s sake, rather than the current state of the product. “Hand-and-a-half” is also a real pain to use, and doesn’t lend itself to a shorthand well. I’m going with 1.5H, though calling it “HaaH” also has some appeal. 🙂

Tori Elite Katana (Tori) – Yes, you read that correctly. I’m publishing stats on a katana. I’m definitely no expert on katanas, or JSA in general, but this is a higher-end sword.

SBG Custom Katana (SBG) – This is not a higher end katana. The only interesting thing about this is that it has a fuller. 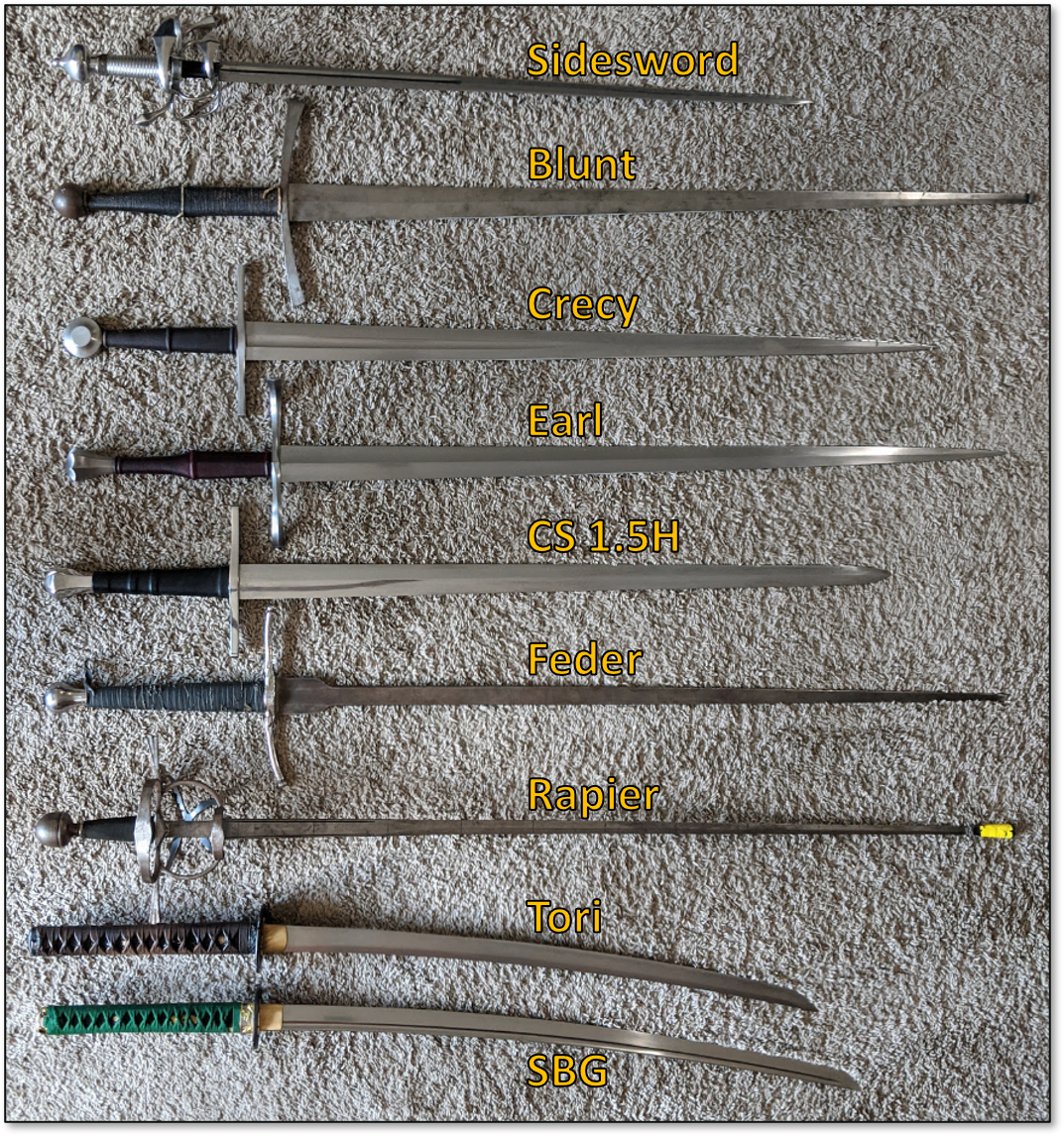 To help keep track I will shade the blunt training swords as a lighter color on the plots.

To start with, let’s look at the moment of inertia. This is how stiff the blade is. 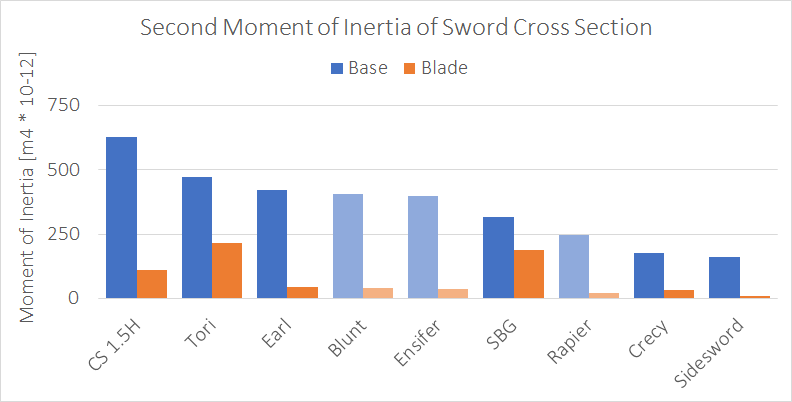 Interesting takeaway: the Crecy is only slightly stiffer than the sidesword near the hilt. This is because it has a super deep fuller, something I never fully appreciated – the steel is only 1.5 mm thick at the deepest point!

It should come as no shock that the base of the sword is significantly stiffer than out near the blade, the swords get thinner as we approach the tip. So let’s zoom in and take a closer look at the cross sections out closer to the tip. 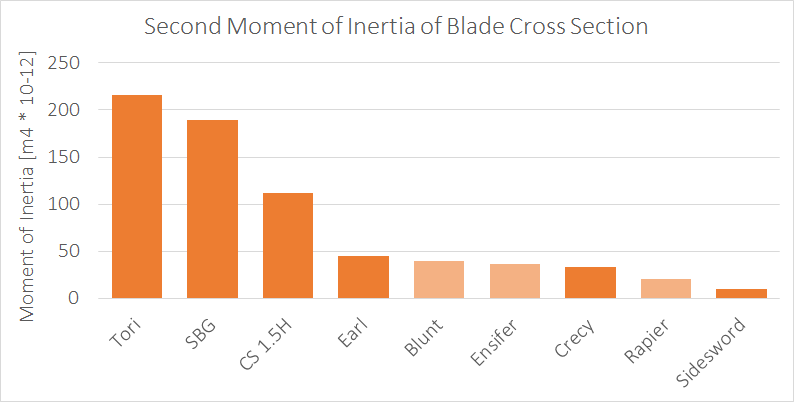 In this instance we see that the katanas are significantly stiffer than the European swords. Which is something we all already knew. And that the Hand-and-a-half is hanging out halfway between the two, which shows you why the Point of Balance is pulled so much out towards the blade.

Just looking at these two graphs, you may think that the blunt longsword is about as flexible as the feder. But this has more to do with the exact two points that were sampled, and a few other weird things. Once I noticed this oddity I soon got enough material to do a whole new article comparing the two. (For a quick sanity check I did a test on the bathroom scale and the feder flexes at 24.2 lbs of force, and the blunt at 36.4 lbs.)

The last thing to look at is how stiff the blades are in comparison to the base. 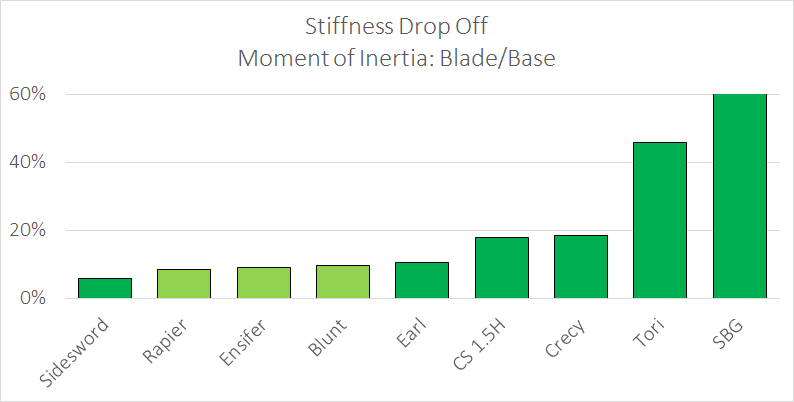 The fact that this graph is so boring also makes it interesting. We are seeing a surprisingly large amount of consistency across a wide range of swords, both historical reproductions and modern sparring. I guess that means we are doing pretty well with the tools we are training with.

Also, which should have been obvious without this plot, we see that the katana keeps far more of its stiffness as it approaches the tip.

Section modulus, as you will remember from the last article, is the resistance against taking a permanent set. It is a product of:

Long story short, a high MoI means that the shape is less likely to bend. But a lower cross-sectional thickness the more it can bend before it takes a permanent set. Combine the two and you get the Section Modulus. And of course I’m only going to be looking at the blade, because the hilt is typically not where we tend to see blades taking sets. 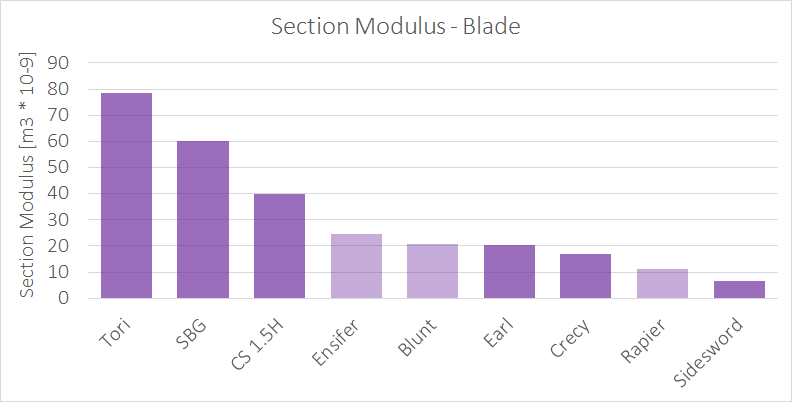 Look at that, katanas seem more resilient to taking sets than European swords. And this will probably sound shocking to anyone who has had experience with both the HEMA and JSA communities. It is generally regarded as more likely that a katana will take a permanent set than a European longsword. Why does the Section Modulus show the complete opposite?

The explanation is most likely found in the grain structure of the katana. A sword is tempered so that the steel forms a hard microstructure called martensite; however in a katana the spine is left in the ‘normal’ steel microstructure, pearlite.

With the limited number of swords I have access to, it is really impossible to draw broad conclusions about different types of swords. If anything this just gives us a better idea of what questions to ask. But a quick summary:

Tune into the next episode of measuring swords, when hopefully I have a bunch more data to share.

In order to put this together, I created a handy online calculator: Moment of Inertia Calculator. Feel free to use when taking measurements of blades.

About Sean Franklin 83 Articles
Sean has a Bachelor's Degree in Mechatronic Systems Engineering, and is currently employed as a Controls Engineer. He is passionate about developing more analytical ways to view sword fighting, wishing to develop evidence based standards for protective gear and rule sets informed by tournament statistics. His martial arts history includes competitive success, medaling in international competitions for Longsword, Messer, Grappling, Rapier, and Cutting. In addition to competition Sean has been invited to instruct at a number of events across North America and Europe.