The concept of touch in sword fighting appears in almost every system. Fuhlen, sentiment, take your pick. This sense of touch, along with other senses such as proprioception, give us a lot of feedback on top of what our vision provides. Which is good, because the non-vision senses tend to be much faster.

But as fast as the other senses are, they’re no substitute for sight. The amount of information we can take in from strictly visual stimuli is immense and irreplaceable.

So how does it all get put together, the faster proprioception and the slower sight?

It will be extremely helpful if you have read the two prior articles in this mini series:

For simplicity’s sake, we’ll look at the action of a single joint. In reality, our actions require some fancy coordination, creating movement in some joints while simultaneously activating stabilization muscles to keep the unneeded joints in place. Let’s imagine that we just need to rotate our arm up, about the shoulder, to get the point exactly online. 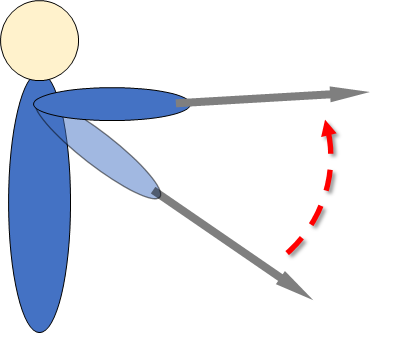 Since we aren’t actually thrusting I guess that means that they’re just kind of impaling themselves on our sword. But we have to hold up our end of the bargain and make sure the point is in the exact right place when they hit it. Science!

The first loop we get to talk about is the proprioception of the muscles. You want to move the point online, and your brain figures out where you need to rotate your shoulder to get there.

Now we are running a closed loop control, with X as the target. Your muscles spring to action and try to meet the task.

But what happens if you didn’t end up bringing the point online perfectly? You made one of these two possible mistakes:

Both of these have the same effect: the point isn’t online where you want it. And it will never get online. The proprioceptive loop thinks everything is hunky-dory. (Note that for our purpose, it isn’t important to differentiate overshoot from undershoot.)

If the proprioceptive loop doesn’t do what you want when you ask, why not ask it to do something different? You know that friend you have that is always late, so you lie and tell them to show up earlier than you actually want them to? We have the brain do that to our body.

Yay, now we are getting somewhere. Case closed, perfect thrust. 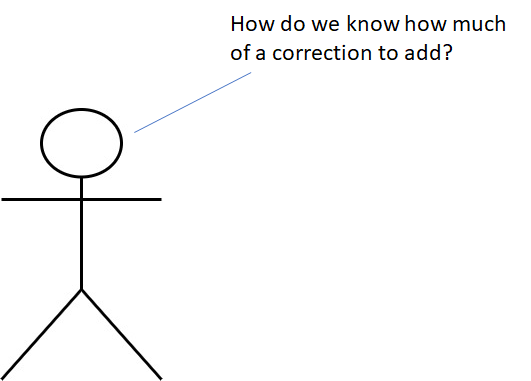 This is far from a magic solution. Generating the correction factor is just as much work as figuring out where to move the arm in the first place. But what if we pretend to be pre-Kepler astronomers and solve all of our problems by adding more loops?

We’re going to set up our control scheme with:

This tries to get the advantages of both worlds. The inner loop uses a much faster control scheme, proprioception, to get the body moving and approaching the target as fast as possible.

To get an idea how this works, close your eyes and try to take a drink of water from a glass. You will notice that the beginning of the motion feels completely natural. But as you get closer to your mouth it will start to feel uncomfortable, and you will have to start slowing down to not spill on your face. This is your body starting with the mainly proprioceptive control, and then using the visual feedback when you get close and need more accurate control. (You will experience the exact same effect if you close your eyes when reaching for the glass in the first place.)

As a HEMA practitioner, you may be wondering: how do I use loops to hit someone in the face with a sword? As always the answer is more training.

The control from proprioceptive feedback is what is quickest. So naturally we want to use it as much as possible. Think back to the example about moving the glass to your lips with the eyes closed: do you think it would be quicker if you could get 80% of the way complete before you had to slow down, instead of 60% complete before you had to slow down? The better the proprioceptive control the more you can do without relying on the visual feedback,and the faster you can accomplish the task.

There was an important aspect of the prior diagrams up until now:

Yes, the training. Your body is a difficult contraption to work. It has to learn these things by trial and error over, and over, and over, and over again. You have multiple loops interacting and they each have a ‘controller’ which interprets the task, and produces an output signal. The better each controller is tuned the tighter the control is achieved, and the less correction is required by the bigger, and slower, loops that surround it.

If you found this interesting you may also want to consider: Control Theory