Quick, name five senses. Equilibrioception, Thermoception, Proprioception, Nociception, and Chronoception probably jump out at the top of the list, right? Or maybe not.

I’m not being difficult and just using fancy names for touch, sight, hearing, smell and taste. The list above are all completely different senses than the traditional Big Five, and the reason is that we have way more than five senses. The exact number is still a matter of debate, some go as high as twenty. (It depends on what you want to consider a sense). Let’s have a look through and see how these apply to fencing.

I’m not planning on running down all the five basic senses (boooooring), but vision is so important it deserves special mention. Specifically the things that vision is not good at. We use vision constantly in our everyday life, the human nervous system is capable of taking in and processing a vast amount of data.

But that ability to process an extremely large amount of data means that it is a very slow system. The classic example is the ruler drop drill. Have a partner hold a ruler suspended, with your fingers just barely far enough apart to avoid touching the end of the ruler. The ruler should be released suddenly, and without warning, so that it falls straight down. As soon as you see the movement close your fingers, and record how far down it fell before you caught it. Then repeat the same exercise starting with your fingers just barely brushing up against the ruler. (Not enough so that it slows the fall!)

You will notice that when you have your sense of touch you can react to the motion more quickly.

Ability to detect temperature. Not so useful in sword fighting.

Proprioception is the body’s ability to sense where all its parts are in relation to each other. To understand, try this activity. Maneuver your hand behind your head, and without touching, position it one phone-width from the back of your head. (The phone-width was so you have something handy to check how close you got.)

How did you know when you have the hand in the correct position? You have a very complicated array of internal sensing organs which enable you to accomplish this task.

The first are the muscle spindles, which are embedded all through our muscles, and tell us how stretched (or contracted) the muscle is. And as we all know, a muscle contracting will pull on the joint, which causes rotation, a flexion or extension.

The next are the Golgi-tendon organs, which hang out at the muscle-tendon boundary. These sense how hard a muscle is contracting. If you push as hard as you can against a wall the muscles spindles will tell you nothing. The Golgi-tendon organs will tell you that you’ve reached your limit against the wall, and lost. (Results subject to wall integrity, results may vary.)

The third sensing organs that feed into this are the joint receptors. These live in the joints and provide a similar function to the muscle spindles and Golgi-tendon organs, but exist in a much larger variety of forms and are less well understood. For our purposes this is unimportant, we just need to know that we have the ability to tell where our joints are in space, and how hard the muscles are working.

Proprioception is of paramount importance for martial arts. When an opponent attacks you don’t have the opportunity to look to see if your parry is in the correct position, you have to know that it is. Even when you have the ability to use visual information the proprioceptive feedback is much, much faster. When trying to move quickly, a motion will typically start with pure proprioceptive control, and then switch over to visual as it is approaching completion.

Equilibrioception is related to equilibrium, as the name should make obvious. This is your sense of balance. Specifically it is the ability to detect the acceleration and movement of the body. The primary organ associated with this sense is the inner ear, which detects the acceleration of the head. But the equilibrioception is also supported by information from vision, and from proprioception. Which is why your balance is worse if you close your eyes.

A lack of equilibrioception is certainly going to hurt you in any martial art. Our movements rely on good balance so we are in a position to rapidly react to any external stimulus. Any time we spend re-adjusting our balance is time wasted, and a huge tell to our opponent.

Balance on its own is also not a single quantity, you have many different abilities to control your balance. Training to balance on a pedestal isn’t going to help you keep stable while trying to out-maneuver your opponent! Dynamic vs Static: A Generic ‘+Balance’ Stat Doesn’t Exist

The ability to feel Pain. Naturally this is somewhat important to martial arts, but not exactly something we want to spend a lot of time training to hone. In general pain will work to our detriment, inhibiting us from doing what we want.

That isn’t to say it is a bad thing! Pain informs us of the damage we are taking, so that we can modify our behavior accordingly. If you suffer injury in a fight, and something isn’t working properly, you need that information to modify your tactics. And, of much more relevance to those the non-badasses which don’t routinely put people down with cold steel, it informs you of when you are damaging your body with your training. The nociception works hard to keep you from hurting yourself, the least you can do is listen and take a break when you need to!

At first glance you might say that timing is of paramount importance to martial arts, so chronoception must be one of the most important senses. But remember that you can only measure the time between events that have already happened. Most of the timing we rely on in martial arts is actually a prediction on how much time will happen based on a complex mental model of your opponent developed through observation and experience.

This isn’t to say that chronoception has no place in martial arts. When building up this mental model you are constantly feeding in information such as how quickly the opponent reacts, or how fast can they move. Chronoception is how the body knows these things, and can put what you see into context to help you anticipate the speed of their next moves. 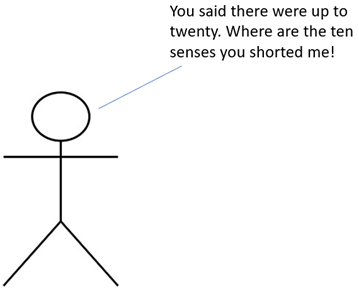 I said there were up to twenty, depending on who you are asking. The bottom line is that there is no single definitive answer as to what is a distinct sense. We have an organ just for sensing balance, but equilibrioception has feedback from other senses feeding into it as well. The human body is full of redundancies with different scraps of information all coming together.