In writing Totally Scientific Reasons You Need a New Sword I added a picture of a sword in the freezer as one of the joke images. Which got me back to thinking about steel and temperature. Specifically how materials can get brittle when frozen.

A material that is ductile will stretch a lot before it ultimately breaks. Brittleness is the opposite, the material won’t deform at all. It simply holds until it doesn’t. No give, just break.

Note that brittle does not necessarily mean ‘weak’. It simply means that the material can’t absorb a lot of energy in relation to its strength. Concrete is a brittle material, if you hit it hard enough it just breaks. Steel, on the other hand, will tend to deform before it snaps, taking a permanent set even after you remove the load. This is called plastic deformation, and absorbs some of the energy from the impact.

To compare ductility to toughness, imagine a sword of titanium compared to a sword made of lead. The titanium sword is brittle, and the lead sword is ductile. But if you smash the two against each other it is the lead sword which will break. This is because although the titanium is brittle, it is also much stronger than lead. 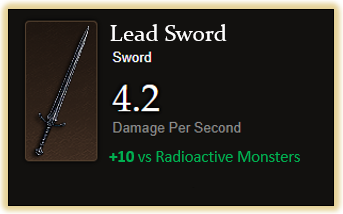 If you have a material that is high in strength, yet also possesses some ductility, you get a tough, winning candidate. Which is why steel is such a popular material. (It can help if you’ve already read my Introduction to Material Properties.)

Are Sword Failures Brittle or Ductile?

Definitely brittle. When something is a ductile failure we see a phenomenon known as ‘necking’. This is when the material starts to thin at the point where you are stretching it, and is something we are all familiar with. If you stretch some Silly Putty out you notice that it becomes thinner and thinner. The exact same thing happens to ductile metals. In the image below, notice how the material gets thinner out towards the fracture? Same as the Silly Putty.

We don’t really see this thinning effect (known as ‘necking’) in our sword breaks, a clear sign that they are brittle failures. And the way to avoid brittle failures is to make the sword more ductile—which would mean it is also softer! Remember that ductility is the sword’s ability to ‘flow’ with the force and not just try to absorb all the energy without budging. This is a good property when it comes to keeping the blade from snapping, but also means that the steel on the edge wants to ‘flow’ into a less sharp shape when you hit it on things.

There are different techniques employed to get around this. Most swords are harder on their surface than in their core, by virtue of the quench cooling which cools the outer parts faster than the inner. Or, to go even further, you could use a differential hardening technique to make the leading edge of the sword much harder than the spine – a hard edge to not deform on impact and a soft & tough spine to keep the sword from snapping. (Just don’t expect the sword to spring back after being bent. The two types of steel microstructure don’t play nice with each other and won’t go back to the way they were.)

Another interesting feature of materials is the ductile to brittle transition. At a certain temperature the material goes from ductile to brittle (hence the name) which causes the toughness of the material to drop dramatically. In the graph below you can see the fracture resistance plummet as the temperature approaches freezing. (This graph is for mild steel. Every different type of steel will have a different shaped graph.)

The fact that this rapid transition exists is actually a fairly recent discovery. Humans have been tempering steel for thousands of years, but by and large the understanding of this rapid ductile to brittle transition has been limited to the 20th century. But what is the big deal if all of a sudden your steel gets weaker when exposed to cold temperatures? What’s the worst that can happen?

Fortunately we don’t necessarily have to be worried that our swords are more likely to snap if the air conditioning is turned up just a little bit too high. Unlike the mild steels used for (eg) shipbuilding, the strong high-carbon steels we use aren’t as susceptible to this phenomenon.. Issues with overly brittle steel at low temperatures are associated with mild steels, which (ironically) are more ductile than high carbon steels at room temperature (basically they’re the drama queens of the ductile to brittle transition world).

This means that cold is not an excuse to avoid practice. Throw on a jacket and get to work!

The ductile to brittle transition is a function of the steel’s lattice structure. Which is the way the atoms are all packed together inside the steel. Iron has what is known as a Body-centered cubic structure. This means the iron is made up of a repeating grid of cubic ‘unit cells’, and each cell has an atom on each of its 8 corners, and one in the center. (Technically there are only 2 atoms per unit cell, as each corner atom is also a part of the unit cells stacked beside it.)

Why is that important? Slip planes. To have something deform without breaking, the atoms have to be able to smoothly slide past each other. In a metal that has a Face-centered cubic structure (like copper) there are many nice paths for the lattice to shear and slip past itself. It’s hard to visualize so you just have to take my word for it*. The Body-centered cubic, on the other hand, has a lot harder time getting slip going. The iron atoms just want to stay put.

However, given enough thermal energy, they can be persuaded to be a little more mobile. We typically think of the ductile to brittle transition as something that happens when we cool down. But if you start ‘counting up’ from absolute zero what is actually happening is the iron lattice becomes warm enough it will allow some slip behavior when at normal room temperature. It is just that most of the time the transition temperature is lower than our normal operating range, so we don’t have to think about it.

*or look for a video on YouTube which visualizes it nicely.

(For more about atomic lattice, you could read Why Does my Gear Crack in Half? )