A colloquialism associated with generating power is “it’s all in the hips”. This is a phrase that:

This can lead to students (or even worse, their instructors) to over-think about what the hips are doing, and ignore the importance of engaging the body.

It is well established in human physiological training that the highest potential to generate upper body force is by utilizing rotation. In a solo event (like discus) you have a ton of space to build up speed and momentum, which track and field athletes put to good use. When fencing we have to keep everything quick and compact, but the same physics apply to everything.

When performing rotational motions there is no doubt that we get a high degree of engagement from the hips. But if you think about it you will realize that is not actually where the power is coming from.

Imagine you are floating in space. You hold the sword and try to swing from left to right. In what direction does the rest of your body spin? Even if you never took physics in grade school you have probably heard the term “for every reaction there is an equal and opposite reaction”. Think back to any times you have tried to push something while swimming, or when standing on ice. Rather than move the object, you tend to just push yourself back. This is the reason hockey players use one hand to grab their opponent when throwing punches. If they don’t, every shot either of them lands just pushes them further and further apart.

This principle is also at play within the human body. If you throw your arm forward it tries to throw the rest of you backwards. Typically we don’t see much of an effect because the hand is much lighter than the body.

Now let’s go back to the start of the section: you holding a sword while floating in space. If you swing your arm and shoulders from right -> left you are going to cause the rest of your body rotate the opposite way, from left -> right. Which leads us to the fun part. If you want to twist your hips so that the sword goes from right -> left, what direction should we twist our hips? The opposite, from left -> right. 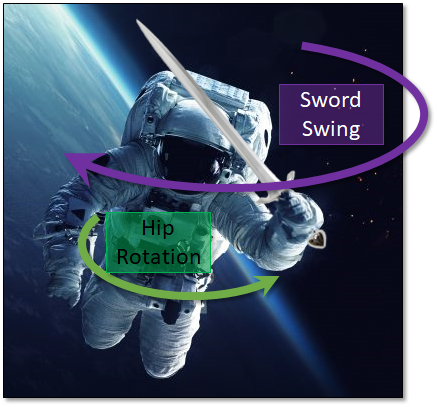 That makes no sense

Indeed it makes no sense if you think about it from the context you are used to (not outer space). In your everyday life there is another very important factor at play: the ground. Your feet are in contact with the ground while you are performing your sword actions. This anchors you, and allows you to produce force without having to generate a counter force on your body. In this case the counter-force is going into the ground.

And it is this force coming from the ground that allows us to generate power in our sword swings.

While we are technically generating rotation from the contact force with the feet, it isn’t a particularly helpful way to teach students. It doesn’t make a lot of intuitive sense. Instead when teaching it is usually best to emphasize the rotation of the entire trunk. A nice snap in the hips makes technique look really sharp, but the easiest way to get the ‘snap’ is to stop engaging the hips with the rest of the trunk, completely circumventing any power transmission.

How exactly you can teach rotational power and what metaphors/imagery you use will be very dependent on your teaching style. “The block concept”, “Engage the core”, “One side forward, one side back”, “Throw the shoulders” are just some examples I have heard of, noteworthy because they were the first four to come to my head. There isn’t a concise explanation fully describes the physics of transmitting force through the body. You need to pick an explanation, and training program, that gets the students using their bodies the way they need to.

You may get snarky and say that F=ma is a four character explanation to capture the full physics. But good luck covering any ground without a = d2x/dt2 😉