One of the difficult things to deal with as a tournament organizer is how to handle people dropping out of matches. This typically happens for two reasons:

If you have a good check-in system and are running the tournament using software it is unlikely the first one will pose problems. Pools can be easily shuffled to accommodate, or at worst case the offending individual simply removed from their pool. If you are doing things by hand and using score sheets you are making your life much more difficult*. Dealing with fighters withdrawing mid-pool is a greater challenge. But still enormously easier with software.

*The real moral of the story is to use software to run your tournaments! I maintain HEMA Scorecard as a free service, and there are many other options available. No excuses!

A strategy I keep coming across is to simply have the fighter who is there get marked down as winning the match with the maximum number of points. This has one thing going for it. It is simple. That’s it. Other than that it is a terrible idea.

This provides a huge unfair advantage to the people who are in pools with people who don’t show up, or to people who have people get injured in their pool.

To explain, let’s use a simulated tournament. The first annual SwordSTEM Invitational. Turnout isn’t great. We have six pairs of twins competing. Amazingly, each fighter has an identical skill level to their twin. Furthermore their skill can be clearly ranked, and the higher skilled fighter always wins, with the point difference being the difference between their skill level.

That means that if Erika fights Brandon, Erika is expected to score 3 more points (5 – 2 = 3) than Brandon.

We will throw all of Twin A’s into Pool 1, and all of the Twin #2’s into Pool 2. After fighting we get the following result:

Nothing unexpected here. If we run a top seven bracket we can expect that Christine and Christopher need some sort of tie breaker. They flip a coin.

But let’s say that Daniel was running late that day, and didn’t show up. Everyone in Pool 2 gets a free win! At first Christine is happy because she knows that she doesn’t have to rely on the coin flip between her and Christopher.

Nope. Christine just got completely screwed over! Brandon gets bumped up and takes the extra spot.

Let’s consider, instead, an injury that happens part way through the pool. Felix fights Eric and Daniel, but is injured and cannot fight Christopher, Brandon or Andrew.

Go Christopher? Naturally everyone would move up one place in the pool rankings. What you might not have expected is that Christopher is now ranked above Daniel. (And note that Christine would also be screwed over in this example).

There is no magic solution that can make it so the results turn out exactly the same as if everyone had shown up. But we can try to minimize this effect as much as possible. In the case of a fighter not showing up the solution is simple: just pretend the matches don’t exist. Simply have the fencers fight 4 matches instead of 5 and scale the results up.

To scale matches up multiply the score by [Target Matches] / [Actual Matches]. In this case we want 5 matches, but only go four. So we multiply the final scores by 5/4 = 1.25.

Using this method we only see a very small change in the final scores. And Christine finally gets a break! If it had been one of the better fighters (Felix or Felicia) who was the no-show the effect would be greater, but still considerably less than if we just gave out free points.

So, please, please, please stop giving people points for matches they don’t fight. We have better solutions in place! If not for my sanity, then do it for Christine. 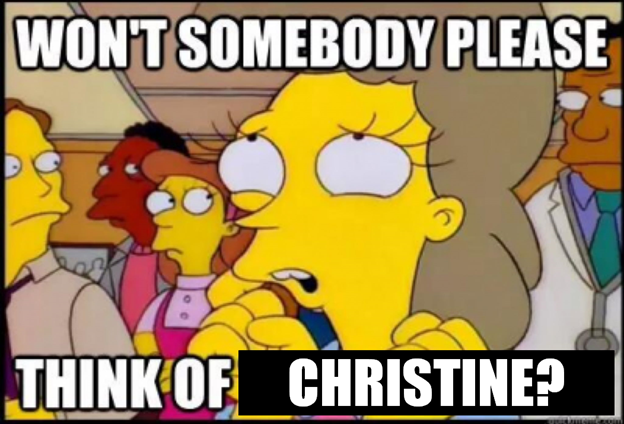