If you are familiar with my methods for analysis, you will be well aware that I tend to spend a lot of time looking at Bilateral Hits. And that I have exhausted my supply of original images to illustrate double hits. This is any exchange where both fighters hit each other, a measure of Double Hits + Afterblows.

I chose to use this measurement because it allows me to compare tournaments with Deductive Afterblows to tournaments with Full Afterblows. In a Deductive Afterblow tournament, the afterblow is used to decrease the score of the initial hit and is a separate quantity from a double hit. In a Full Afterblow tournament all hits before the hold are considered equally; there is no distinction between double hits and afterblows, so Bilateral Hits are the only meaningful metric that can be extracted. Thus, if we want to compare the two, we have to use Bilateral Hits. (Not that there aren’t still other factors at play to make comparing two tournaments difficult. I’ve explored it a bit in What are Tournament Stats?)

A criticism I receive is that lumping doubles and afterblows in as the same thing isn’t exactly fair. After all, they are very different in terms of intent and are often the result of very different decisions on the part of a fighter. This is a very fair criticism, but given the data we have to work with I don’t feel that there is really a better option.

Looking at my ever expanding data set, I pulled the data from tournaments using Deductive Afterblow rules. This allowed me to look at how the doubles and afterblows were related.

If we try applying a trendline to the overall data we don’t get anything especially good. 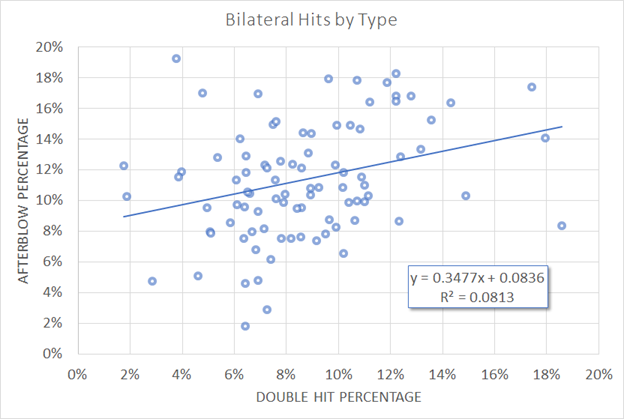 Does it make any difference if we check what type of weapon is used? 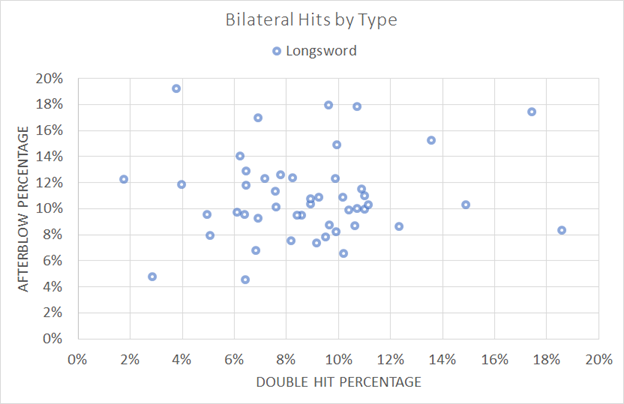 With longsword we don’t see a strong trend at all, there isn’t much correlation between the double hits and the afterblows. 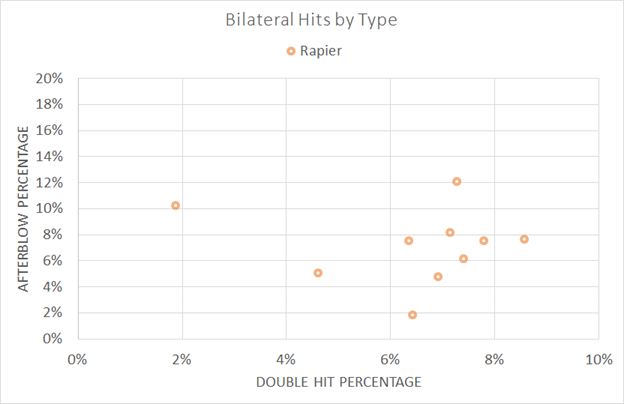 Not a lot of data here for rapier, but it looks more correlated… if you ignore the outlier. 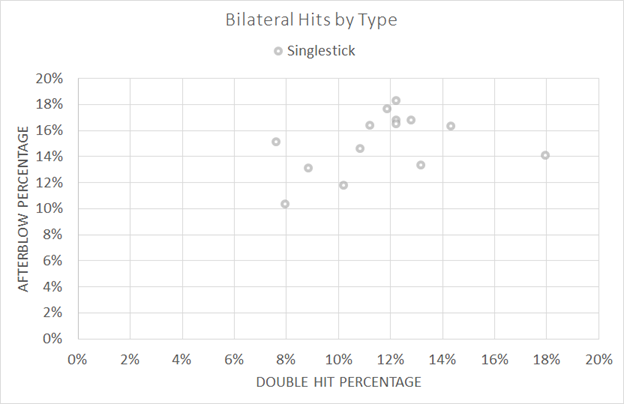 Once again, the singlestick looks like it has a decent trend except for an outlier.

Sword and buckler tends to have a fairly tight band of afterblows, but the double hit percentage is spread out quite a bit. No good trend here. 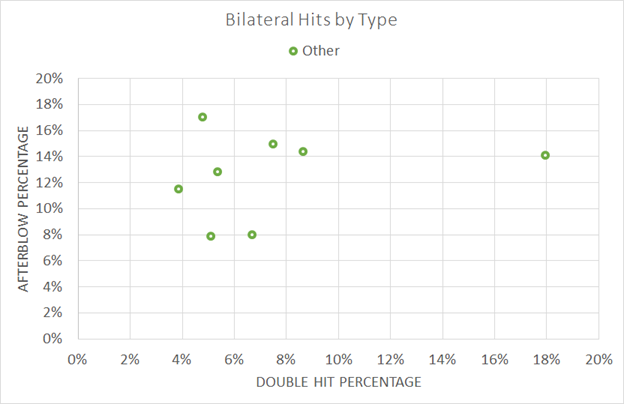 And these other crazy weapons (Bowie Knife, Backsword, etc…) are even more all over the map!

As you can see there isn’t really enough data to conclude anything for most weapons, but based on what we saw with the longsword I think it’s safe to say that there isn’t a ton of correlation between the double hit percentage and the afterblow percentage.

Does this finding carry over to Full Afterblow tournaments? Of course we will never know because the data does not exist. 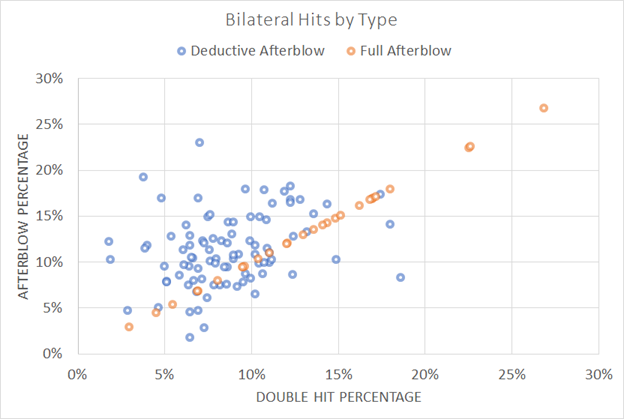 What does this tell us?

Not a lot, but I thought it was interesting and I knew people would ask.

Given the data sets I’m working with, it does not look like there is any correlation between the number of afterblows and double hits in Deductive Afterblow tournaments.

I still feel that the Bilaterals per Exchange is a useful metric, as it is the simplest and most versatile measurement of tournament cleanliness I know of, and can be applied across the largest number of tournaments possible. But this clearly shows there is space for a better metric that can capture the characteristics of a Deductive Afterblow tournament is more detail.

There is a lot of data here, fortunately page space is free.