Ballistics is the study of how projectiles move through the air. In essence, it’s the elaborate study of how things fall down. There is usually an assumption that the thing that is falling is also moving horizontally at fairly high speed, and that the horizontal movement is what you are really interested in.

But in writing about how tatami pieces fall I was struck by how “Tatami Ballistics” is a great title, and makes for some great clip art. And here we are. 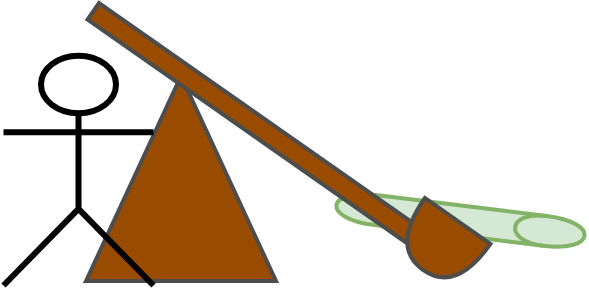 Let’s go back to force vectors. If you need a refresher, Force Vectors Article.

When you cut, there are a bunch of forces acting on the cut. Each one has a magnitude (how much force) and a direction (which way the force is pushing). 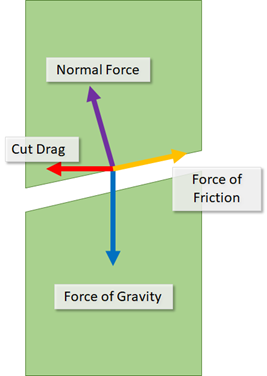 Force vectors add together to get a total net force. An example:

I am assuming that you are probably not doing a whole bunch of moving around as you read this article. (And if you are, good for you!). Standing, sitting, or lying still* means that there is no net force on your body. No net force, no acceleration, and if you weren’t moving in the first place, no movement.

When thinking about force acting on things the key word is “net”. That is not the force from a net, but the sum of all the forces added together.

*informal poll in the comments on how people read these articles?

So if all the forces on the tatami piece add up to zero, it doesn’t move and makes you look like a cutting master. It’s all about getting the balance between them correct.

Let’s take friction out of the equation. You did the perfect ninja cut, there was no resistance from the target. Your cut is so infinitely smooth that there is no friction from the blade either. That leaves us with two forces left. Let’s add them up. 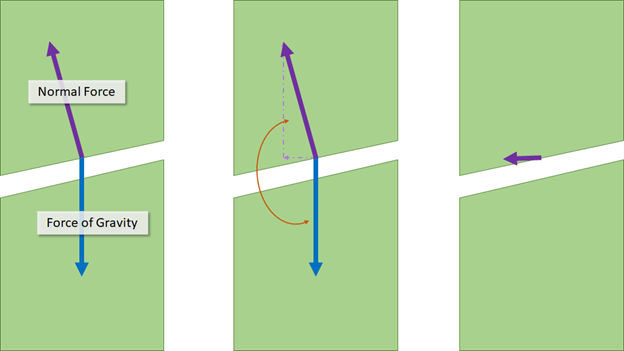 Let’s add the friction back into the equation. Provided that the cut is sufficiently flat, the forces can cancel out and the tatami doesn’t move at all.

We add the cut drag back in, and get to the original diagram. If we are perfect, it all balances out and the tatami doesn’t go anywhere.

What will usually happen is that the cut drag exceeds the horizontal component of the force of friction. 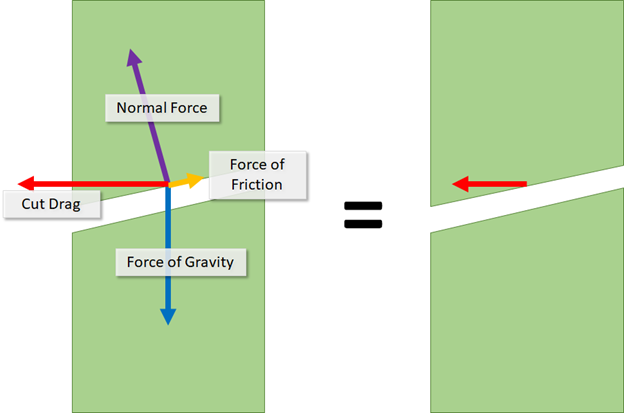 And thus the piece does not stay on the stand like a good little boy.

But how far does it fly? That is a product of two things:

So you can cut twice as bad as long as the piece off the top is twice as big! This also shows that it is much easier to do double cuts if you cut very close to the bottom, and have as heavy a piece on top as possible.

What does it matter how a tatami falls down?

Thus far we have been looking at a right descending cut. 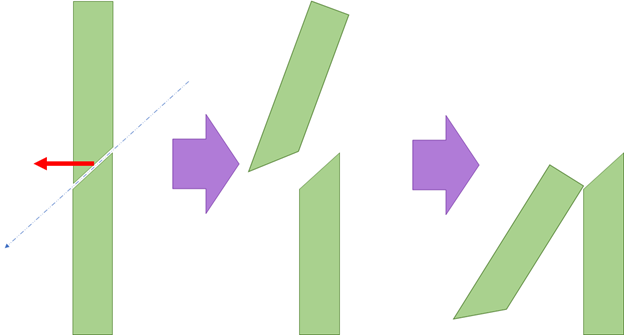 But what if that is an ascending cut?

Stacking multiple tatami mats beside each other is a great way to work on consistent cutting angles. It may not shock you, but the more mats you stack up, the harder it is on you. But there is one way that it can make your life easier!

A double cut is a cutting challenge where a martial artist must cut the bottom of a target, and then cut the upper portion of the target before it falls. This tests that the practitioner can deliver a quality initial cut, causing very little reaction from the target, and that they are balanced enough to achieve a quick recovery.

But let’s say that we stack multiple mats beside each other. You can see right away that the last mat is the only one which can actually go anywhere.

So in reality you are doing a cut through three mats, but only actually doing a double cut on a single mat. The first two mats could have not been super great, but as long as the third one is good the feat will succeed. (Note that you still need to have the skill to cut through three mats in a line. Don’t take this as me demeaning that.)

And even the last mat is slightly easier to cut than a normal double cut. Usually as a piece falls over, it is also sliding down the mat. With another mat beside it that can’t happen. It is forced to rotate  in a larger arc, and hence fall slower. 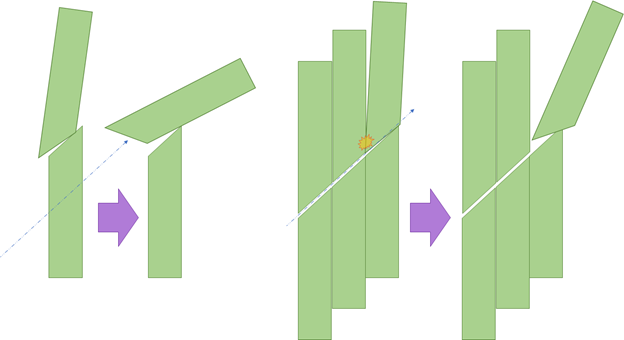 So while this looks much more impressive, it is actually an easier challenge than doing the same thing without the middle mat!

So there are a whole bunch of different combinations and ways that the cutting angle, mass of the remaining piece, and blade drag will produce different motions. Pieces that spin in the air? Check, I’ve seen it. Pieces that fly off and hit the judge scoring your tournament? I don’t know what you are talking about.

I’ll probably explore this more in the future, but maybe next time you cut you will look at what happens to the cut piece, start thinking about the force vectors, and what it means.