“For every action there is an equal and opposite reaction”

– Everyone quoting physics to sound smart

For a sharp impact the surface in question just can’t exert enough pressure back on the sword to stop it. The material fails, and the sword starts cutting into the target. (For the difference between pressure and force, read my article.)

So in reality when you are cutting you are doing two things:

This is why for a great cut you almost feel as if you cut nothing at all. That is because the target exerted very little force on your sword, which means that it didn’t lose any speed during the cut. So in order to understand this better, let’s look at exactly what can cause the target to exert force on your blade. 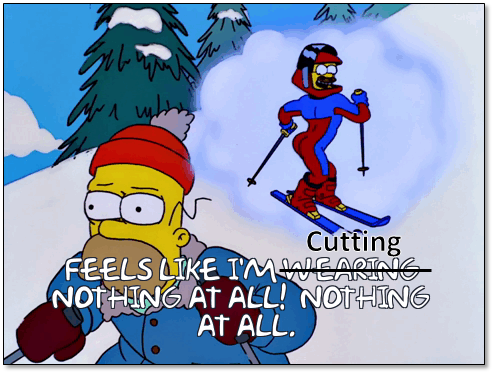 Edge alignment is one of the most significant factors that the cutter can control. If you don’t actively practice cutting, you don’t really have an appreciation for how finicky it is. This effect is something that people quickly grasp through experience, and I’m not going to talk about it here.

But I didn’t want anyone coming away from here thinking that I didn’t consider it super important. 😉

The first thing that takes energy out of your sword is the effort required to, well, cut. This is the process of making one thing into two things.

On a molecular level, everything that you consider a solid has bonds between all its molecules. This holds it all together, and is what makes it a solid.

When you cut (or rip, or anything really) you are breaking these bonds. Different materials have different strength bonds, which is why it is eaier to rip a piece of cardboard in half than a piece of steel.

There is another big factor in how easy it is to break the bonds: how sharp your sword is.

If you read my article on pressure you have an idea of how this works. The sharper the sword the less surface area it has, the less atomic bonds it is in contact with, and the more force it exerts on each of them.

Or we can look at it from the other way around. When one talks about the sword exerting force on the atomic bonds, so too do the bonds push back on the sword (before they ultimately break). 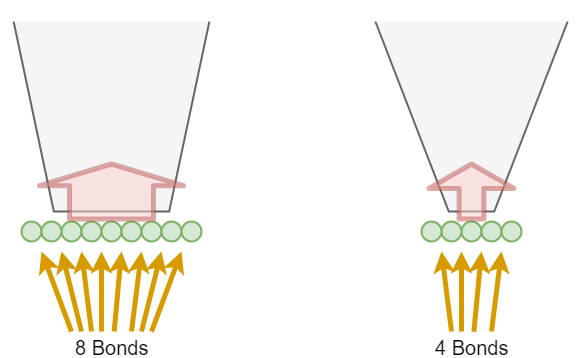 With a dull sword you are going to feel a lot more resistance as you cut. This is force that the target is pushing back on your sword.

Which of these boxes do you think is going to be easier to push around?

Assuming I am not playing a trick on you by putting heavier things in the small box, it’s going to be easier to push that one. This is because it has less friction with the floor.

But where does the friction come from? Let’s introduce the concept of the ‘Normal Force’. Normal not as in an ordinary and boring force, but force in a specific direction.

Ok, back to swords.

Normal force isn’t just generated by the force of gravity on boxes. It is generated by any pressure between two surfaces. When you are cutting through a target the material is pinching the side of your blade.

This pinching generates normal force, which generates friction. And this friction slows your blade down.

This is kind of the same thing as blade drag, but viewed in a slightly different way. Imagine that you have a very stiff target, like metal. Even if you have an infinitely sharp sword, there is still something preventing you from cutting.

Not only do you have to cut the target, you have to spread it to the side to allow for the sword to pass through. 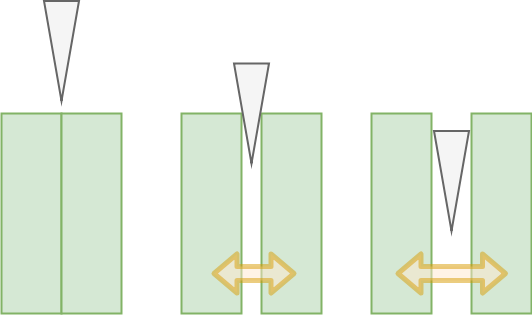 This means that even if you have both:

You still can’t just cut through solid metal! If you wanted to show off your l33t skills with your super magic sword by cutting through tank barrels it would still end up looking something like this.

So much for my dreams of growing up and being this guy:

Different test cutting media challenge the cutter in different ways. The in-depth mechanics of ‘why’ these things happen is super complicated. But we can understand the ‘what’ that is happening in two different target media: tatami and clay.

This is going to be the same no matter what target you chose. The friction resistance is going to increase in proportion to the weight of the target.

Coming back to tatami, this seems like it doesn’t make sense. If the friction resistance increases so much, why isn’t cutting the bottom of the tatami harder? Because the friction force when cutting tatami is insignificant. 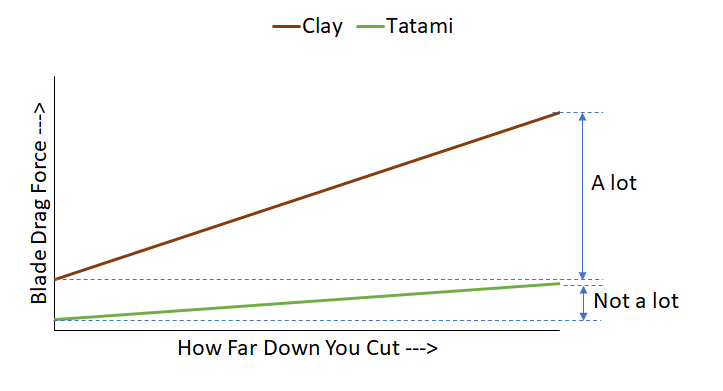 *There is a significant difference based on the biomechanics of cutting lower. But if you were to raise the stand up so that you could use the same technique you would notice no difference from the tatami itself.

One thing that does make a big difference in cutting tatami is the sharpness of the sword. Likewise when cutting clay you can use a dull sword. (And most people do, as it makes your expensive cutting sharp really ugly in very short order!)

This tells you that with tatami you need a sword which is very good at breaking the molecular bonds of the tatami fibers, whereas with clay you do not. Intuitive, as small children can pull clay apart without much effort.

What does this mean for real cutting? More experimentation needed!

Practitioners who have cut cloth know right away how difficult it is to perform without an extremely sharp blade. This shows that bond breaking is a significant factor in getting through the initial layer. As for the flesh and bone itself? That is more complicated.

Unfortunately cutting actual flesh as a target has some difficulties, and isn’t done super often.

Academic research isn’t much help either — studies of cutting are typically done at speeds significantly lower than a sword would move. This means that they are ‘non inertial’, or that they don’t take into account how a fast moving object would interact with the medium. So the results, while interesting, aren’t super translatable. 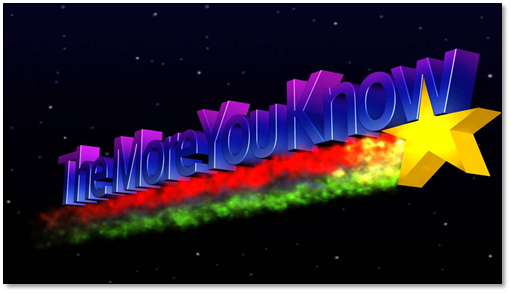 Yes, I used ‘drag’ in a section to describe velocity invariant coulomb friction. Deal with it.

As for true drag, I haven’t seen clear evidence of it at play. It’s naturally present to some degree, and most likely more so in media like clay than tatami. However it’s difficult to isolate, as the net response of higher cut speed is still improved penetration.

Interestingly enough, from accounts I have heard of cutting ballistic jelly, the viscous drag is actually so significant that weaker/slower cuts became more effective.