Well, it finally happened. I screwed up.

On pulling data from tournament software I grabbed the wrong values to do calculations with. This lead to results and conclusions which are not supported by the real data. Since the goal of a scientific investigation is to produce results which can objectively determined to be false, I’ve edited this article to show where the errors occurred, and indicated which conclusions are no longer relevant.

Thanks to Tim Magnuson for doing work on the raw data and pointing out my mistakes.

Once again I have the opportunity to compare two different rule sets and draw some conclusions. This time the results were extremely interesting, showcasing how changes to the relative afterblow strength affect not only the behavior of the attacker, but the behavior of the defender.

*in the Prototype rules the Head was defined to also include the top of the shoulders, from seam to seam.

The first step I take when comparing tournaments is to look at the Bilateral Hits. A bilateral hit is any exchange which involves both fighters getting hit — double or afterblow. 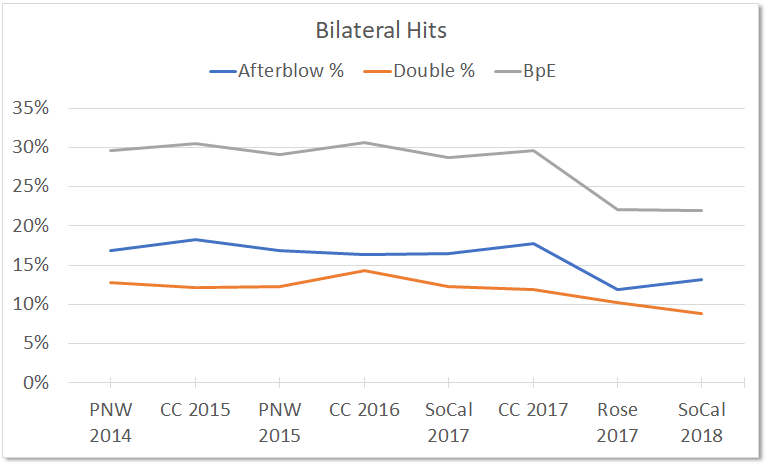 These results show that the prototype rules are keeping things rather clean. Both double hits and bilateral hits have decreased, but not by a significant margin. There is a similar improvement over the trend at Rose City 2017.

One of the goals of the event organizers was to bring the fighting higher and promote more fighting for the head. (If it wasn’t obvious enough from the point spread!) 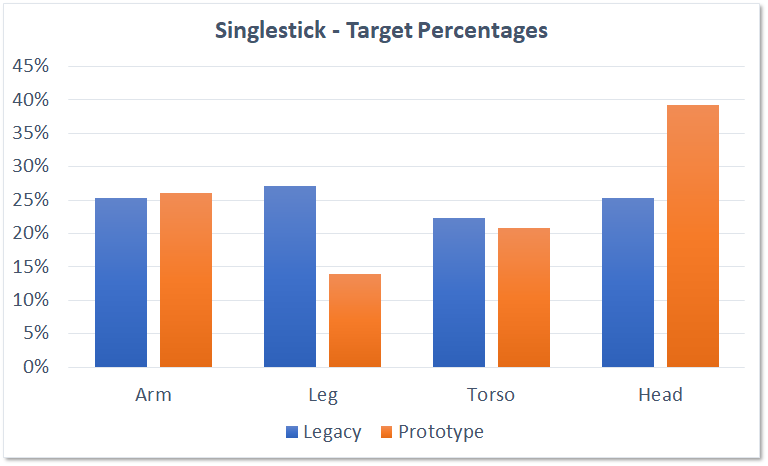 In this way, it seems like an unqualified success. Arm and Torso shots remained the same, while there was a 48% decrease in leg targeting and a 56% increase in head targeting! Though we have to keep in mind that there was an expanded target area for the head in the Prototype rules.

In addition to changing the point values of all the targets relative to each other, there was another, more profound, effect of the point changes. The afterblow is a negation of 1 point in both Legacy and Prototype rules. By lowering the point values to 1, the afterblow becomes a full negation instead of a deduction. This is a qualitative rather than quantitative difference. 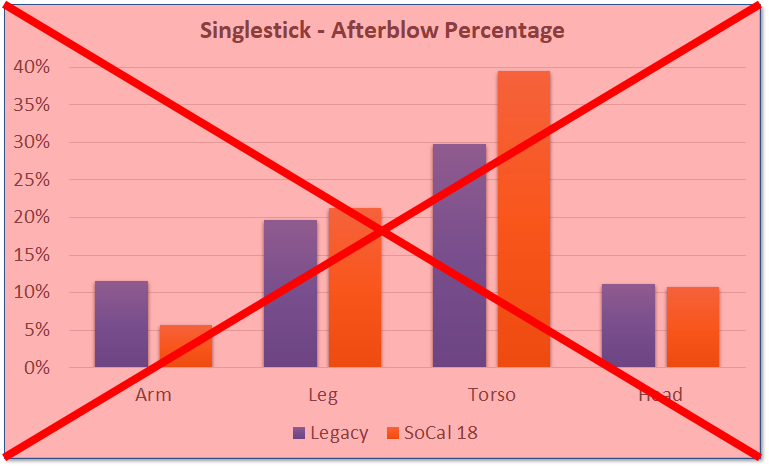 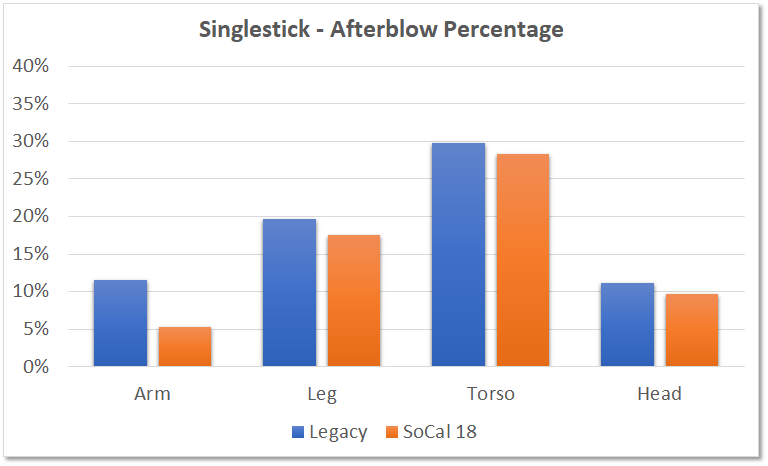 Let’s start with the head. Nice and simple. The point values and relative afterblow weight didn’t change, and neither did the afterblow percentage.

It is worth noting that in the Prototype rules, the Head was worth the most points by far. By conventional afterblow thinking, this would encourage people to attack the head more recklessly, not being concerned about the afterblow’s relatively small deduction. Instead, the Head attacks remained consistently safe from afterblows.

The Arm saw a significant decrease in the number of afterblows. This is something that doesn’t have a ready explanation. Like the Head, the Arm did not change its point values or relative afterblow weight. For now it remains a mystery.

The first point to note is that the torso was always by far the worst offender for provoking afterblows. Conventional afterblow wisdom would attribute this to it being worth a relatively high value in the Legacy rules (3 points), allowing competitors the ability to receive a significant amount of points even after taking afterblows.

The experience with the Prototype rules once again turns this on its head. Rather than decreasing, the number of afterblows increased. Massively!

This means that rather than causing the attacker to be safer, the bigger effect of the afterblow was to promote the defender to be more active in throwing them. Because the defender could now negate a strike with an afterblow, they were more apt to take the hit and rely on the afterblow to cancel it out.

From a martial arts point of view this is insane!

The legs are a little bit of a trickier case. We already know that they were targeted significantly less in the Prototype rules, but it’s hard to nail down why.

Factor #1: They could now be completely negated by the afterblow, and fighters were more judicious in their targeting.

Factor #2: They were simply worth fewer points and not as attractive.

Factor #3: Fighters were worried that their opponents would not attempt to defend the legs, and rely solely on the afterblow to defend.

Factor 1 is good in any ruleset. We want fighters to be concerned with being hit by afterblows when they send an attack. Factor 2 is a stylistic decision on behalf of the tournament organizer. In this case, the organizer wished to draw fighting higher, so this could be considered a positive effect. Factor 3 reflects an expectation of un-martial behavior on the part of the defender. This is not good, in any rule set.

How do we sort this out? We can’t, but the Afterblow data does give us some more clues. The raw number of points wouldn’t affect the afterblow percentage for a target, so we can’t get any clues as to the effect of Factor #2 from it. But the fact that in the Prototype rules it is a full negation — vs a partial negation in the Legacy rules — should definitely make a difference.

If fighters are being more judicious and safer about targeting the leg, one would expect the number of afterblows to decrease. They did not, instead they stayed the same (Actually there was a slight increase, but the fluctuation is small enough it could easily be random).

Using the same train of thought from the Torso section:

This splits the difference. The attacker learns to fight more safely, but the defender learns to be equally reckless in response.

This is a really interesting case study. Beyond providing insight for the event organizers to make future rules decisions, it provides an excellent opportunity to directly observe the effects of the afterblow on fighter behavior.

Based on these conclusions, I feel that the empirical case against strong afterblow rules is mounting. 😉 I look forward to getting the chance to see another excellent data set like this for review.

These are the full afterblow numbers, broken down by target location.

This is the full exchange summary for each tournament.