It’s a fairly common tournament format. Fighters face off against a few opponents in pools, are ranked according to some metric, and then seeded into a bracket.

We’ve all seen some spectacular tournament upsets, or fighters shaking off a bad pool round to come back for a tournament win. They are what make things exciting. Which may lead us to ask: how important are pool rankings to overall elimination bracket success?

I don’t know what you would do with a lot of this data, but I found it interesting and fun to put together. And if you take issue with my methodology, I encourage you to do better! I’d be super excited to see the results!

Like most of my analysis, I work with what I have. And at the moment it is a data set dominated by Western North American events, many using the same pool indicator scoring algorithm. I’ve lumped it all together, just focusing on the rankings.

The first thing I was interested in was: How much does your rank predict your win percentage?

After filtering out some bad data, I had 737 matches left, from which I got to this relationship. It matches fairly well with my intuitive sense, but there are more details in the nerd stuff at the bottom of this post.

With a model in hand, I was able to work out the chances of each fighter doing well in a bracket. This is all single elimination bracket; double elimination would change stuff a bit–most likely increasing the odds of high-seeded fighters doing well. 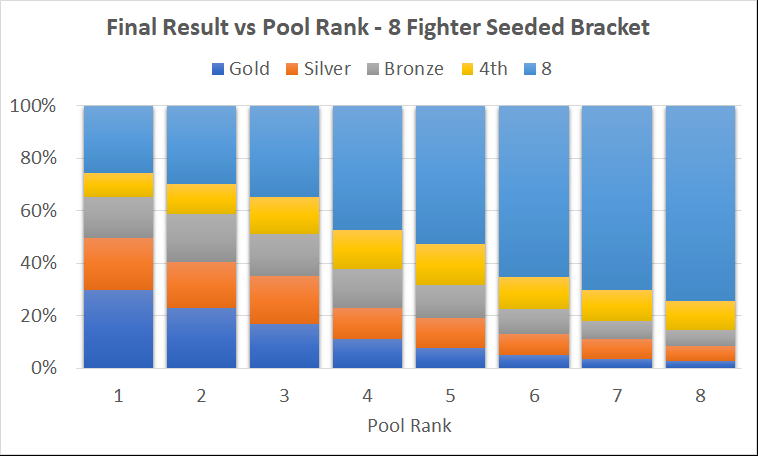 So for a simple top 8 elimination, the first seed has about a 30% chance of winning it all and will come out with some form of a medal ⅔ of the time. Now what about different sized brackets, I hear you ask with bated breath.

The 32 fighter bracket is the most interesting visually, so let’s look at some interesting points:

One thing that the previous results assumed was that the bracket was seeded properly, with the top fighters kept away from each other. What if they were just randomly thrown into the bracket?

Even if you don’t like math, you can see the difference in the two shapes. In an unseeded bracket there is a way higher chance that the higher ranked (and assumed to be more skilled) fighters don’t advance as far. Not entirely surprising, as the advantage of a seeded pool is that the higher ranked fighters are kept away from fighting each other for as long as possible.

The last thing to consider is an elimination pool. This option is even better for ensuring that the better fighters rise to the top, but has time constraint issues. For fun, we can see what a random bracket, seeded bracket, and elimination pool look like side-by-side. 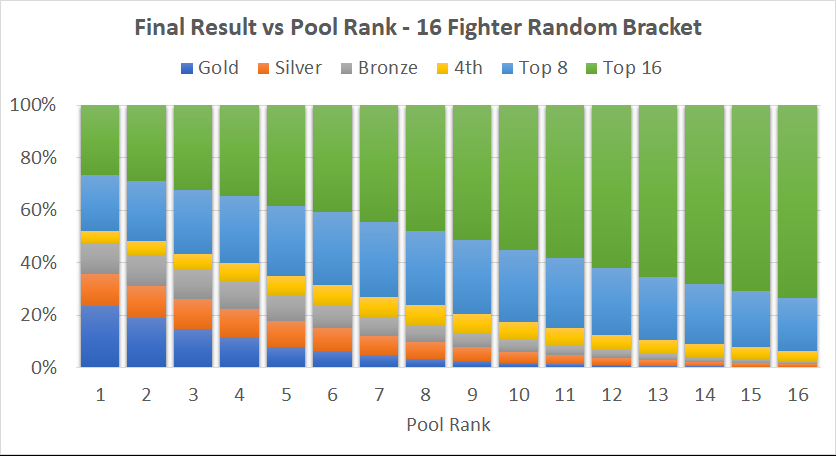 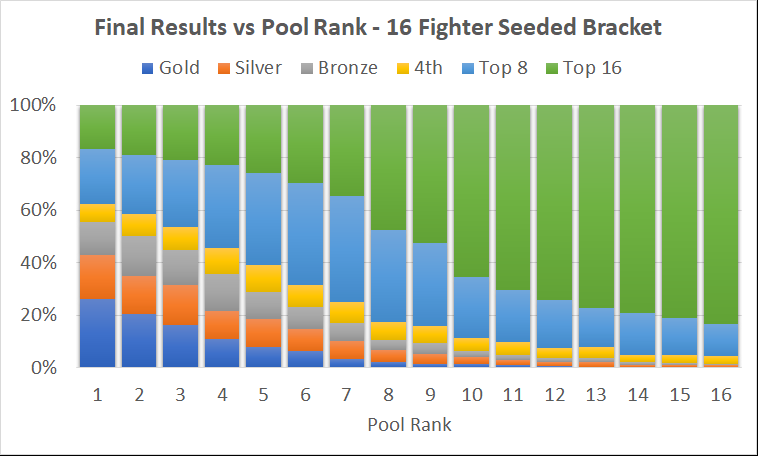 Is Silver better than Bronze?

I mean, as a medal. Silver is worth like a hundred times as much per gram as bronze. [for fun, insert link to metal-purchase or valuation site?:)] 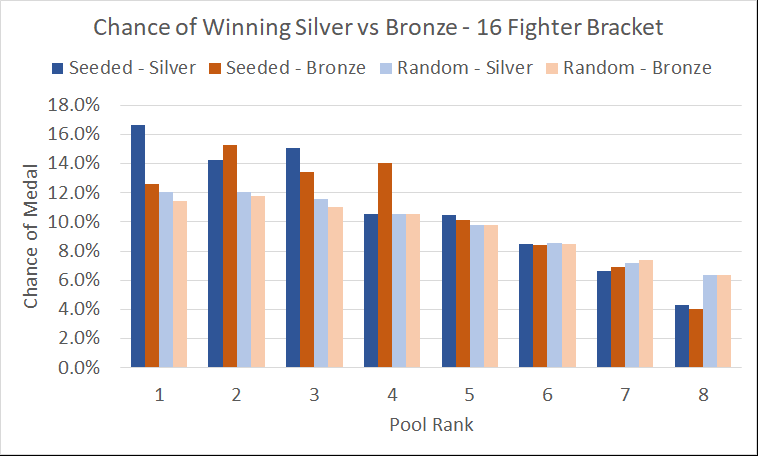 The reason for this is simple, winning silver and bronze are the exact same thing! Both medalists beat everybody else, but lost a single match. [should you comment that you already made this point earlier?]

Contrast this to the results for the seeded bracket. Now we see some differences start to appear. But this more or less confirms what we already know from the last paragraph, that silver vs bronze has less to do with your skill and more to do with where you lost your match. Or more specifically, your chances of a 3rd place vs 2nd place finish are probably more influenced by where you started in the bracket than by anything else!

In many cases, the person in 2nd place directly beat the person in 3rd place to get to where they were. This is true. But in terms of predictive ability to say who was the better fighter, it’s a rather poor metric. Take any other placing difference, say top 8 vs top 16, and it says far more.

I hope you are having as much fun as I am.

how often does the highest seeded fighter get knocked out early in all the different formats?

In terms of keeping the best fighters in the game:

How does the elimination format affect your probability of getting into the final four?

BLECCH, THIS IS A BAR GRAPH THAT YOU HAVE DRAWN LINES ON. PLUS THE Y AXIS ISN’T LABELLED, IS THIS THE % CHANCE OF This shows the same results as above, just coming at it from a different point of view. This effectively ‘ranks’ the different formats from right to left based on how often they have the highest ranked fighter as the winner.

One of the big kickers that pool rank can fail on is the pool seeding. If the most skilled fighters are not well distributed into the pools, chances are the pool rankings won’t be as accurate as they could be. Which messes up the seeding for the fighters in the brackets, which has a significant effect on the outcome of the tournament.

So I guess, if you want to learn anything from this:

If you like graphs as much as I do, I hope you found this fun!

The results data can be approximated by a linear regression without too much difficulty, producing an R2 value of 0.8756. Not great, but for the coarseness of the data it’s not terrible. The big problem is that after 15 points of rank difference the higher ranked fighter had a 0% chance of losing. And we know that isn’t realistic.

I next tried an exponential of the form:

In theory this would be nice, 50:50 chance at 0 rank difference and approach a 100% chance of victory asymptotically. Unfortunately it matched the data very poorly.

Finally, Excel’s logarithmic fit came to the rescue, producing a function with both an R2 value of 0.9337 and a profile that fell roughly in line with my experience.

Most of the tournaments used what has become called the “Franklin 2014” algorithm, for lack of me coming up with a name.

Additionally, the pool winners were all ranked ahead of the non-pool winners, regardless of score.

I obtained the results by repeated simulation of tournament brackets, 10,000 to 5,000 iterations (depending on how computationally intensive they were). Each test was run twice, and the run-to-run variation all occurred in the 4th most significant digit or higher. This is more than adequate accuracy for the results obtained.