I’ve always been a big advocate of evaluating tournaments in as objective a manner as possible, so I’m going to take a crack at it. To my knowledge, this is the first time a HEMA ruleset has been evaluated in such a way. This is not, and was not intended to be, up to the quality one would expect from an academically published paper. I would encourage anyone who feels I did not do the subject justice to contact me, and I can arrange for you to begin working on an improved draft. 😉

TL;DR  Conclusion: The ruleset shows a marked improvement in most measurable ways. It is likely that a large part of this is due to the exceedingly demanding quality standards for cuts, particularly cuts to the torso.

The SoCal 2018 Sword and Buckler tournament was a small tournament, consisting of only 217 exchanges. While the sample size is small, the Legacy ruleset shows fairly stable results — enough so that the differences observed are highly likely to be significant.

The full rules for each tournament may be found in the Appendices at the bottom of this article.

Both rulesets used pools ranked by score, followed by a single elimination bracket.

Bilaterals per Exchange (BpE) – The percentage of exchanges which ended in either a double hit or an afterblow. A lower BpE is desirable.

Deep Targets Ratio (DTR) – The ratio of attacks aimed at targets prioritized by the rules (high point values) to those with less emphasis (low point values).

The scoring for the Prototype ruleset was an interesting mix of Fully Weighted Doubles and Deductive Afterblows. In very few circumstances were points awarded for a double hit: only 4 exchanges of the tournament (2% of the total) were double hits that awarded points to the fighter hitting a higher value target.

DTR as a variable is a a little more problematic to track. This is because actual targeting data does not exist, only the scores recorded by the scorekeepers. Additionally, the point breakdowns were not the same in each case. 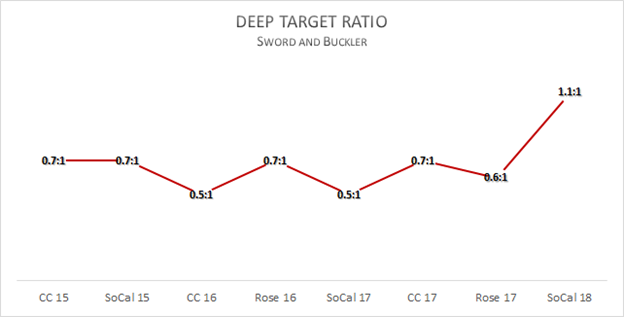 The data shows a significant increase in the DTR, from an average of 0.6 to 1.1. This is almost double the previous average (just shy of 5 standard deviations higher than the Legacy mean).

A major difference between the two was that in the Legacy rules the leg below the knee was worth 2 points, and in the Prototype rules this area was off limits. The deep target ratio only considers the ratio of 3 point shots to 1 point shots, and thus does not include lower leg targets from either ruleset.

The 2 point Legacy lower leg shot offered a higher point value than the 1 point targets. It is unclear whether removal of this target would significantly change the DTR.

In order to ensure useful comparison between the two rulesets it was necessary to account for the buckler punches, which would have been included as low point value attacks for calculating DTR. At the conclusion of the tournament, I consulted with the match director and asked him to estimate the percentage of attacks directed at the sword hand vs buckler punches. Independent estimates from each of us produced the same result: 50%. This number has been factored into the DTR shown in the plot above.

In post event discussion, the organizing committee agreed that perhaps the largest effect on the conduct of the fights was not the rules themselves, but the strict adherence to quality of blows. This was over and above the Legacy rules, which were already very strict with cut quality (the highest standard I know of in a Sword and Buckler tournament).

The Prototype rules paid particular attention to cuts aimed at the body. Based on test cutting practice it was known how difficult it is to execute such a motion, and how most S&B flank cuts are simply fighters pumping their arms and ‘bashing’ at the flank. Due to the relative size of the tournament, it was possible to staff with a director and judges who could recognize from experience the efficacy of blows performed to the torso.

This appeared to produce a dramatic rise in fight quality. Once hacking/uncontrolled attacks to the flank proved unlikely to score a point (or even a hold call), most fighters adapted by throwing cuts to the sword arm/head, and thrusts to the head/torso.

The low horizontal cut, relying solely on the buckler for defence, has a very high incidence of Bilateral Hits. This significantly reduces its attractiveness and is likely the biggest contributor to the reduction in BpE.

Though the initial results are favorable, there are issues which limit the utility and adaptability of the Prototype ruleset.

The Prototype ruleset deems strikes to the lower leg non-point scoring. This significantly distorts fighter behavior, as was intended. Because of this it may be argued that the improvements in BpE and DTR were achieved at the expense of adding another artificiality to the matches.

As of this writing, there are plans to eventually introduce the leg target into the Prototype ruleset with the hope that fighters will have developed an increased skill set for targeting higher openings. At that time it will be possible to independently evaluate the effect of the elimination of the lower leg target.

Due to the small size of the Prototype tournament it was possible to run it with a single set of highly experienced Judges/Director. They were able to rigorously enforce the quality of cuts to the flank to a very high standard, which is judged to be a major factor in the tournament’s success.

Because of this requirement, the Prototype ruleset is limited by scale. Based on the current judging standards of most HEMA events, it is highly possible that adoption of these rules would lead to a completely different outcome in a larger tournament.

Based on the results observed, the Prototype ruleset appears to be preferable to the Legacy ruleset. This is based on a single small tournament, but the difference is significant enough to consider the prototype ruleset an improvement. There are important concerns to widespread adoption of the Prototype, but future use is undoubtedly justified.

The Legacy rules have experienced slight changes from event to event. The following is from Rose City Classic 2016.

The tournament director will serve as the ultimate authority within the ring. The disciplinary procedure will generally constitute first a warning, then a penalty, then an expulsion from the match or tournament; however shall remain at the discretion of the director. Fighters who have been banned from attendance this event in the past, or from other major HEMA tournaments, are not permitted to attend.

A double hit is defined as two fighter landing valid blows against each other in the same tempo. This is undesirable, as it shows that the fighters are not adequately concerned with their defence. Doubles will be penalized in accordance to the stage of the tournament in which the occur.

An afterblow is defined as one fight striking another immediately following a failed defence which lead to them being struck. At no point should an afterblow be considered a ‘revenge blow’, and afterblows are expected to be thrown with an appropriate level of control.

Should the match director determine that a double hit or afterblow was without a doubt the direct result of a single individual acting with complete disregard of defence they retain the ability to assign the fault of the double strike to the individual in question. At this point the offending fighter will be assessed a penalty at the discretion at the director.

Points will be awarded for cuts, thrusts, slices and pommel strikes in accordance to the rules of the individual tournaments. Points will not be awarded for touches with the sword, but be delivered with sufficient intent.

Additionally should a fighter place both feet outside of the ring (through their own action or if pushed by their opponent) their opponents will be rewarded with one point.

The following are off limits for safety reasons:

No exposed skin is permitted for any tournaments.

All armor will be inspected by the tournament staff prior to competition. If any armor is deemed to be inappropriate, the participant will be required to remove it and replace it with a piece of appropriate equipment.

The afterblow deducts one point from the score of the attacking fighter.

The match will be concluded once a fighter has reached a total of 7 points.

All armor will be inspected by the tournament staff prior to competition.

Scoring is as follows:

3 points – Cut to Upper Opening or thrust to either Opening. Any attack performed with control. Disarm or takedown.

1 points – Cut to Lower Opening. Cut or thrust to limbs.

Fighters may self call hits on themselves only. Fighters are expected to conduct themselves in a mature and sportsmanlike manner throughout the tournament. There will be no derogatory insults, back talk, or baiting of other fighters, coaches, Director, Line Judges, staff, or spectators by any fighter or coach during the tournament. Coaches are expected to show the same decorum and sportsmanship as their fighters. Any coach who violates this rule may, at the discretion of tournament staff, be banned from cornering at the ringside and/or ejected from the tournament. (This includes vocal heckling of judging and refereeing calls during the match. If a coach has a question, with the exception of safety concerns, they may speak with the referee at the end of the exchange by raising their hand.)

Anyone who sees an obvious safety concern including spectators–for example, a blade break, or a tip coming off of a rapier or dagger, or other safety equipment malfunction, should yell “HALT! SAFETY! HALT!” as loud as they can. The referee will immediately halt the match, and the situation will be handled as needed. Any fighter who hears a call of “Halt! Safety!” should cease attacking and withdraw from their opponent as safely as possible.