I bet you never imagined a connection between why bugs are small and why large tournaments are run a certain way. But here we are.

It’s very tempting to look at a large tournament and think: “That was a really dumb way to do that, why didn’t they do it the way we did it at the local event that worked so well.” Now, I’m sure there are lots of brilliant ideas being implemented all over the world at lots of small events. But the problem is that a lot of them simply aren’t implementable at larger events. A large international HEMA tournament isn’t just more of the same thing — in many ways it effectively becomes a different entity.

Let’s say we want to calculate the surface area and volume of the cube. I’ll spare you some math and show you another picture.

I hope this has you on the edge of your seat.

What do bugs have to do with anything?

‘Bugs’ is a fairly broad term, and generally encompasses small crawly things with exoskeletons*. This means they support themselves with a hard outer shell, instead of with internal bones (endoskeleton) like we do. But why don’t we ever see huge horror-movie sized bugs? 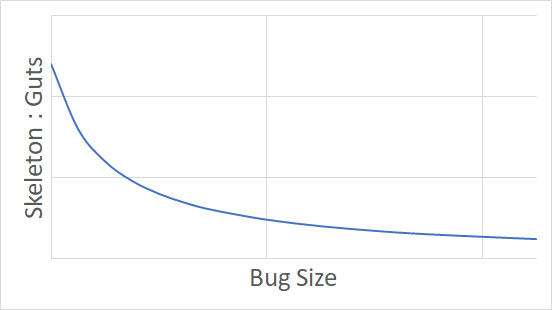 Notice how, as you start increasing bug size, the skeleton-to-guts ratio starts to decrease sharply? This means that for a bigger bug there is just less skeleton to hold up the weight — it’s not strong enough. The skeleton has to be thicker, which makes the bug heavier again. And eventually there comes a point where the whole thing collapses on itself.

This is why you don’t see bugs get that big. Surface to volume ratio keeps them from reaching a size where they can truly challenge us mano-a-mano.

(Fun fact: there is a way to make bigger bugs. Have them live underwater, where buoyancy can mitigate some of the weight concerns.)

*Which all belong to the phylum Arthropod, meaning ‘Jointed Foot’. My grade 11 biology teacher made it his mission in life that if we remembered nothing else, we would remember that.

That was fun but….

What does it have to do with HEMA?

The important takeaway is that there are things which are completely suitable at one scale, while being completely inappropriate at another. A couple HEMA examples are staffing and fencer intent.

When running a local event, it’s really easy just to have the host club instructor do everything. They can take a few names ‘at the door’ and direct all the matches. Everyone has a good time and goes drinking afterwards.

At a large event with multiple rings and weapon sets, this isn’t possible. First of all, you need at least one set of directors/judges for each ring. Then you need replacements, because the event runs all day for multiple days. How many clubs have this deep of a volunteer base? Not many.

…Which means you then have to bring in staff from outside groups that are nice enough to help you.

…Which means that you need much more comprehensive training and standardization. Every club has a slightly different approach, and getting them all delivering a consistent tournament is a non-trivial process.

…Which means that the rules now need to be written not only in a way that satisfies the host’s vision of a perfect tournament, but in a way that is consistent and easily applied by different directors.

That last section may have looked kind of like a disorganized mess of thoughts. That’s because it was. It’s a headache to deal with; you can see how we went from just having more staffing slots to fill, to having another major factor to consider when writing rules.

Back to the first local event, where everybody is from one or two schools and you all kind of think the same way. You probably have some similarities in how you fight, and no one is ‘that guy’ who just tries to get the win. People more or less do exactly what you want them to, and you are happy with how your rule set works.

Then you host a big event with people from all over.

… And someone shows up who fights completely differently, and the ruleset is now no longer producing the fighting you want.

… And someone shows up from way out of town who is just there to win matches. They don’t care about double hits any more than the rules punish them for it. All of a sudden there is another way to win that you never noticed before.

Oftentimes, you just need ‘that guy’ to show up and beat a bunch of people using sportive and un-martial techniques before the whole atmosphere is ruined. Worse yet, other people start picking it up. All of a sudden, the perfect rule set that you never saw any flaws in before doesn’t quite hold up.

Most of us, whether we are aware of it or not, tend to have some sort of Social Contract with those we spar with on a regular basis. This contract would be any ‘unwritten rules’ or patterns of behaviors we fall into. A simple example of this is “If you attack me, I will prioritize my own defence instead of trying to hit you”, but manifests itself in a huge number of much more subtle ways.

Oftentimes, when a ruleset succeeds it is because of a social contract that exists between the participants. The hard part is that most of the time, you don’t even recognize what it is or how it could fall apart.

The bigger the event, and the more diverse the pool of people participating, the harder it is to get any sort of social contract between participants. To paraphrase a well known organizer of international calibre tournaments:

“I don’t think it’s possible to maintain any sort of social contract in a tournament larger than 30 people. After that it becomes a different ball game.”

These aren’t unknown problems to large event organizers; grappling with them is one of the major challenges they face. And boy are they everywhere. Do you think fighters behave the same way at a fun school fight night championship vs a major international tournament final? Of course not!

So when designing a rule set, make sure it is appropriate for the scope of the event. There are rulesets I think would be fantastic for certain events, and terrible for others. Before you criticize a large HEMA event, put yourself in their shoes and think about things like number of competitors, time and space available, staffing availability, and ability to control fighter culture.

(This doesn’t mean we shouldn’t be critical, just an informed kind of critical. 😉 )

I was once at a tournament that used Average Points Awarded per Exchange as a means to rank fighters in the pools and determine fighter advancements. This was intended to encourage fighters to look for higher value targets/actions.

I don’t know if anyone else realized that just trying to land maximum value techniques — while not caring about getting hit a lot or losing — would have easily landed them in first place. To this day, I still wonder what everybody’s reaction would have been if I had gone through with it and ended up as the #1 ranked fighter and ‘technical award’ champion, with only one attack in my favor and 0 wins. 😀