Sometimes people talk about how much ‘force’ something hits with. Unfortunately, they use the same term to describe average force, peak force, and impulse. Let’s have a look and see what all this scientific mumbo-jumbo is about.

If you see the following two cars crash into each other, what do you think will happen?

You know right away that the big car will knock the small car out of the way and keep on rolling forward at a slower speed. Assuming you like underdog stories, we would like the yellow car to escape this predicament — one way is to bulk it up to the same weight as the blue car.

But there is a second way. I didn’t say that the cars have to be going the same speed. I left that for you to assume. By making the yellow car faster, we can also force the big bully blue car into a stalemate.

This is the concept of momentum: speed multiplied by weight. Doubling the speed has the same effect as doubling the weight.

These examples highlight linear momentum. There is an equivalent rotational momentum, and it has to do with rotational speed and rotational inertia.

Impulse is force acting on an object over time. This is what makes momentum change.

Have someone throw something hard at you. It probably hurt. 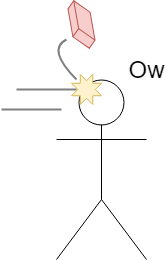 We can gain insight into impulse by looking at changes in momentum. In the last drawing, the brick bounced off your head because I thought it looked funnier to draw that way. But let’s pretend it sticks in your eye or something. 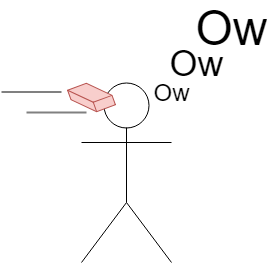 The brick had a definite momentum before it hit you: speed times mass. But as it’s sitting in your eye, it isn’t moving anywhere. This is because your face exerted an impulse on the brick, slowing it down. Likewise, the brick imparted the same impulse on your face — noticeably lowering the quality of your day.

Much like momentum, impulse has two components: in this case they are force and time.

Let’s say you were prepared coming into this article, and brought a pillow to protect yourself from my cruel yet informative explanations. 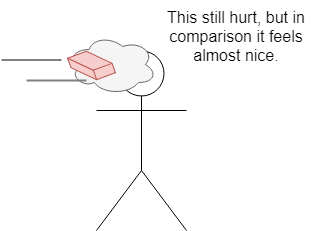 Why did it hurt less? There was the same impulse, but it was spread out over more time. The same total force is applied, it is just at a slower rate for a longer period of time. Imagine filling up a bucket of water with a hose: a lower flow rate and more time will put as much water in the bucket as a high flow rate and less time.

It is peak force that is likely to do damage. Going back to crashing cars, a frontal collision and a gentle stop both impart the same impulse on your body. One has considerably higher peak force, and is highly likely to cause injury.

You can also think of the the brick-pillow-face example, which seemed like a much more desirable outcome than the brick-face example. This is because it delivers a lower peak force.

Reducing the peak force of an impact is an important function of our protective gear. If someone strikes you in a padded jacket, the same amount of impulse still has to transfer to your body. The key difference is that while the jacket is squishing down between the sword and your body, it is lengthening the impact time and lowering the peak force.

It’s also why it is less likely to protect you from getting the wind knocked out of you, because that has more to do with impulse than peak force. The jacket can’t be everything to everyone. 😉

This isn’t the only thing that gear is doing for you. In addition to lowering the peak force it spreads the force out over a larger area. And class, what is force over area?

(It’s pressure. Homework for next week: Force vs Pressure )