Dagger tournaments can receive an unfair reputation as stab-happy fights, with competitors disregarding defense for a ‘first-strike at all costs’ mentality. This paper will determine what proportion of exchanges in a recent dagger and ringen HEMA tournament ended with clean, contained hits and how many ended in doubles or hits with insufficient control. Also, it will note any significant differences starting position or weight class might have had on these outcomes. By examining the data and video gathered, this paper clearly demonstrates both starting position and weight class tend to favor certain outcomes.

In October 2019, the Cymbrogi School of Western Martial Arts hosted Geselle Fechten, their yearly tournament in Oklahoma City, Oklahoma. Besides offering three divisions in longsword and one division in single sword, Cymbrogi also introduced a new tournament, dagger and ringen (wrestling) with two weight classes. Dagger tournaments, whether in mixed weapon or as standalone events, have the potential to devolve into sniping competitions where the speed and athleticism of the opponents influence the outcome more than any mastery of martial techniques. At Geselle Fechten, the rule set attempted to discourage this type of ‘dagger tag’ and rather be more mindful of defense. As described on their website, “The Dagger/Ringen event is designed to force you into wrestling/containing the weapon to score rather than athletically stabbing your opponent.”[1]   This paper aims to determine just how successful this rule set was with regards to achieving this goal by examining the proportion of fights that ended by dagger or ringen situation, versus those that ended in a double or insufficient containment situation. Also, this paper will look deeper and examine if one of the three starting positions was more or less likely to encourage ‘scoring in a safe way’ and to discourage doubles and inconclusive outcomes.

The ruleset for this tournament had several unique points,  conscientiously chosen with a desired outcome in mind. One of their aims was to:

“…encourage martial techniques and grappling situations rather than just “sniping” a target in a show of athleticism. The goal of the event is to show the practitioner’s capability to defend with grappling and their weapon against a combatant in a lethal encounter. As such, scoring in a safe way is the primary concern and how we will measure success.”[2] 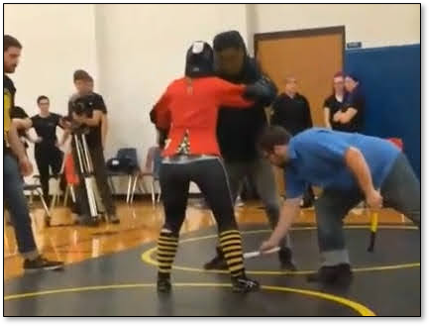 This paper was made possible based on a remarkably lucky happenstance: a tournament using the HEMA Scorecard software to collect all the fight data and make it readily available, and complete video coverage of all tournament fights recorded and then made public on YouTube. Without either of these components, this paper would have been nearly impossible.

HEMA Scorecard provided the structure of the tournament. This is free online management software that tournament organizers can use to run their events and share the results afterwards. In this situation, it provided the number of participants in each weight class, the pool arrangement and competitors’ basic fight data including wins, losses and doubles.

Reviewing the video of the fights provided the finer level of detail necessary for this paper. While HEMA Scorecard noted wins, the video showed whether that was a win by dagger or ringen. Synthetic daggers were provided by the tournament organizers and were wrapped with different colored tape for both visibility and extra safety. Fights could end in one of three positions: a hit with a dagger using either its point or its pommel while containing the opponent; a ringen resolution, where one opponent was pinned, loaded for a throw or otherwise bodily contained; and finally, exchanges where there was either a double or a situation with no clear containment.

The video also showed what the starting position for each fight was.  Fights could begin in one of three positions: each opponent with a dagger in hand, separated by about 10 feet; opponents at grips with each other, a dagger behind each on the floor about 5 feet behind them; or opponents as grips with each other, a single dagger on the ground  equal distance between them.  For pool fights, all exchanges started only in the dagger in hand position. For elimination and final fights, the exchanges rotated through the three different starting positions.

Geselle Fechten provided a large data pool for examination. For the first year being held, both weight classes had a respectable number of entrants with 17 participants in lightweight dagger and 20 participants in the heavyweight category. Participants were divided into the two categories based on self-reported weights with the division between the two falling roughly around 170 lbs.

Furthermore, the way the matches and exchanges were structured ended up providing not only a large data set, but one spread evenly across all participants. At the pool level, each match consisted of five exchanges or rounds. The elimination pools and the final fights then had three rounds. Combatants might fight more than these numbers of rounds, as individual exchanges could be reset in the case of sloppy or inconclusive fighting, but they would not fight fewer. A combatant would have fewer fights than prescribed by the rules if they were forced to drop out due to illness or injury, but that did not occur this year and is only mentioned as a possibility. A few exchanges did have to be discarded from consideration due to data gathering errors. For example, a small number of fights were not captured on video. These fights were disregarded as there was no way to determine either their starting or ending positions.

Each exchange was examined and coded with one of three different beginning states, and one of three different ending states.  The beginning states were: A – ‘Dagger in hand – 2 daggers total’; B – ‘Dagger on ground behind each competitor – 2 daggers total’; or  C – ‘1 Dagger on ground between competitors – 1 dagger total’. The ending states were: F – ‘Hit with dagger – point or pommel’; G – ‘Ringen Resolution – to the load, throw or pin’; or ‘H – Double/ No clear containment’.  So, for example, a pool match exchange that started with each competitor with a dagger in hand and ended with one competitor pinning the other, would be coded ‘A/G’ .  An excel spreadsheet was used to track and code all exchanges and can be made available on request. 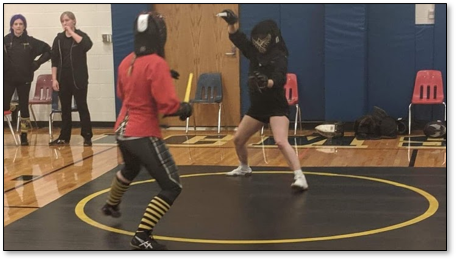 In conclusion, several patterns emerged between weight class, starting position, and fight outcome.  The heavyweight category had a higher percentage of doubles than the lightweight category and also a lower percentage of ringen resolutions as the fight outcome. However, for both weight classes, doubles tended to occur with the same starting position, that of dagger in hand, and the majority of ringen resolutions happened when exchanges started with the dagger on the ground.

The starting position also favored certain ending positions. Perhaps unsurprisingly, in general when an exchange began with daggers in hand, it also ended with a hit by dagger if the exchange were clean. Many of these exchanges were not clean, and the majority of doubles occurred when each competitor started out armed with a dagger. When the fight began without a dagger in hand, the outcomes were much more varied.

It would be overly simplistic, however, to say that to encourage ringen and discourage doubles, the organizers should start more fights with the dagger on the ground and fewer fights with dagger in hand.  We should not assume that the number of doubles results from the starting position only.  For the structure of Geselle Fechten, the two starting positions with the dagger on the ground only occurred in matches at the elimination or final levels of the tournament.  Could the low number then be a result of the generally higher quality of competition seen at these levels? Are competitors at the elimination and final levels less likely to have doubles than competitors who do not make it past the pools in general, regardless of starting position? Further research would be needed to answer these questions, in addition to adding all potential starting positions to pool matches.

So in the end, 24.7% of all exchanges in the 2019 Geselle Fechten dagger tournament ended in a double or an uncontained situation. Or perhaps it would be better to say instead that 75.3% of all exchanges ended in a clean, contained manner. Is this an acceptable ratio? At this moment, these percentages are just singular data points, and should be seen neither as good nor bad, but as a starting point for examining the Geselle Fechten ruleset and as a baseline for future years. As the organizers continue to improve their ruleset, keeping track of the same figures from year to year will give them an idea of whether the changes they make improve their percentages or not.

Many thanks to all the members of Cymbrogi I bugged with questions over the past few months, with special thanks to Darrell Vannostran , Kyle Toelle and Jeremy Pace! Thank you for your patience and willingness to open your tournament to such scrutiny,  videoing all the tournament fights, editing out the down time and getting them posted to YouTube in such a speedy manner! Also, big thanks to HEMA Scorecard for existing in general and being so darn useful.

About Sarah Potratz 1 Article
Sarah Potratz is a member and instructor with the Wisconsin Historical Fencing Association - Appleton where she mainly studies longsword and smallsword. Her love of history took root while interning in the UW-Madison Special Collections and Rare Book Library as an undergraduate and working there as a graduate student. After receiving her Masters' degrees in Library and Information Studies (MLIS) and History of Science,Technology, and Medicine at UW-Madison, she moved up to Oshkosh to begin work at Thrivent Financial as a corporate archivist. It was here that she started practicing in HEMA in 2016. She has also participated in the tournament circuit since 2017, traveling to both fight and teach. After recently being introduced to Grand Baton (bastone), she has started studying Giuseppe Cerri and will begin teaching that in Wisconsin in Spring of 2020.