Up, down, side-to-side. These are examples of translation. If you take off your fencing mask and drop it on your foot, it is an example of translation. In this case it is one dimension, the mask moving straight down. If you instead throw a temper tantrum and chuck the mask, you are looking at two dimensional motion. The mask is moving both in the up-down direction and the towards-away plane. And if it strikes the head of a judge and bounces to the side you have a three dimensional motion, with the mask also moving side-to-side.

If you throw your mask so hard it bounces you will also notice something different about the motion. The mask is rotating. In addition to the translation we need to specify the rotation to characterize a motion. Consider: 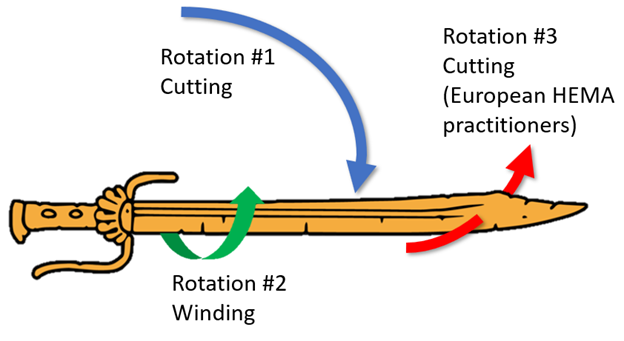 The Degrees of Freedom (DoF) are the number of directions in which an object is free to move. If something is just floating in space, then you have six degrees – all three translations and all three rotations. Once you have outside forces on an object you start introducing constraints, which will limit your degrees of freedom.

Imagine a key in a lock (or don’t imagine, you can go to your front door and follow along at home if you want). The key has two Degrees of Freedom. The first is rotation, provided you have the correct key in the lock. The second is translation, you can slide the key out of the lock.

The other two rotations are constrained; you can only twist the key, but not wiggle up-and-down or side-to-side. Likewise you can’t translate the key any direction other than in or out of the keyhole.

How Many Degrees of Freedom Do You Have?

The answer is a lot. Each human joint has between one and three degrees of freedom, defined by how much it can rotate. (Any translational movement means the joint is dislocating). Most joints are simple rotating hinges, with a single degree of freedom, but that doesn’t mean that you can’t produce a wide range of motion. Just look at the hand alone:

On first glance it may seem like more Degrees of Freedom is a good thing. The more freedom you have the more motions you can generate. Which is true. But the more degrees of freedom, the more difficult it is to control. Lets consult the textbook on what happens when you make things just a little bit more complicated…

It isn’t just squiggles on a chalkboard, your body has to internally figure out all the motions as it is trying to perform the movement tasks you demand of it. There is a reason that humanoid robots look very blocky and, well, robotic when they move. Coordinating movement along so many Degrees of Freedom is an extremely challenging problem.

It becomes way more difficult to control a movement as you try to simultaneously manipulate more Degrees of Freedom. It is significantly easier to move in one dimension, and then move in a second, than to move in both at the same time. For instance, it is a much more difficult task to bring the point online while advancing the sword than to bring the point online and then move the sword forward.

When thinking about motions in HEMA, and sussing out interpretations, you should allocate a bit of your brainpower to figuring out how many different joints you are trying to coordinate at the same time. The more Degrees of Freedom you are trying to manipulate at the same time the more difficult a problem you are presenting to your central nervous system. And the more difficult a problem it is, the less speed and accuracy it will be able to deliver.

Strictly speaking the Degrees of Freedom will always be the same for any human body problem, because in keeping a joint stationary you are also actively controlling it to be stationary. However it is easier to keep a joint locked in place than to precisely control its movement – particularly if you have created a strong and stable structure for it.

Additionally the sword will always have six Degrees of Freedom. Even though you are intending to move it in a completely translational path, you still have to keep it from rotating. However, provided you aligned your body sensibly, this makes the task much simpler and justifies my simplification above.

Also, the sword technically has zero Degrees of Freedom, because it is constrained by your hands.