Simplifying assumptions is not unique to doing math on swords. When doing physics you basically can’t do anything without some sort of simplifying assumption. The question is what assumptions do you make, and how much do they affect the result. If you are trying to calculate how long it will take a rock to drop from your hand to the ground, you will be ok to neglect air resistance. If you drop a feather then not so much.

So there is no issue with people making simplifying assumptions when doing sword physics calculations. You kind of have to. The question is: do the assumptions lead to the results being meaningless?

(Note, I’m not going to give specific examples of these from other people’s work. This is because I don’t want to seem like I’m calling anyone out for making simplifying assumptions. We are all doing this for free to help build up the knowledge base of a hobby we love, and making someone feel bad for trying to contribute knowledge is a shitty thing to do.)

The first assumption is the rigid body assumption. This assumes that there is no deformation of the bodies involved. If you point your sword at your opponent and push your hand forward, the tip is going to be moving at the same speed as the hilt. If the sword was non-rigid, pushing the hilt forward might compress the blade instead, like a giant spring. The speed of the hilt and the speed of the tip are no longer directly linked.

Provided they are 100% on-edge blunt impacts this is a fairly valid assumption; the sword is very stiff along its strong axis, and doesn’t deform very much. The unfortunate reality is that a full mathematical 100% on-edge strike is almost impossible. Not only are there errors in the edge alignment of the wielder, but the target itself also has movement. These will induce both flex and twisting in the blade when it lands, motions which suck up force & energy – thus changing the overall dynamics of impact.

The lack of contact between the wielder and the wieldee is a more troubling issue than the rigid body assumption. As we know, swords are fairly stationary when left to their own devices. 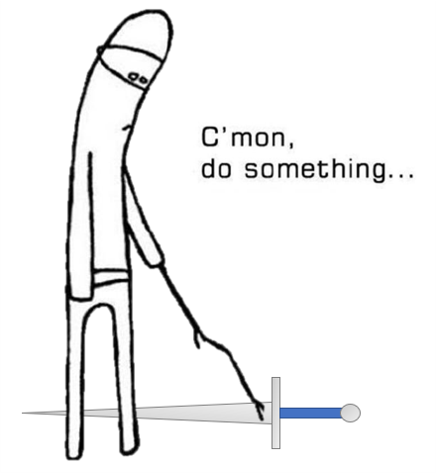 The sword needs the hand to get it up to speed, and for it to do anything. But, that isn’t actually much of an issue. The hand imparts energy into the sword, moving it up to speed. But math lets us describe a sword that is already moving, without worrying about how it got there. No problem here.

But what happens when the sword hits something? The target imparts force onto the blade. And the force on the blade causes the blade to accelerate.

Describing how the sword moves when it hits the object takes some work, but others have described it in detail. However, these physics neglect one important part: the hand, or hands, is in contact with the sword and will impart force on it.

The problem is that understanding the effect that the hand has on the sword is really really hard. If we aren’t interested in the exact forces on the contact area, and just the overall dynamics of the blade, we can make the rigid-body assumption for the sword. But the connection between the sword and body is most certainly not rigid. Our flesh is spongy and weak!

When you hit the wrists will exert a force on the sword, but they will still bend a bit. Generally one of the goals of good cutting form is to create a strong structure that deforms as little as possible during the impact, but it isn’t perfect. Which begs the question of how much do the wrists bend? What forces do we use in the calculation?

The answer to this question is: no one knows.

The movement of a rigid body sword in space can be described very well by theoretical calculations. But in order to factor in the hands real experimental data is required. And that is a lot more work to get. There have been a lot of good theoretical frameworks constructed, but now we need to do some real science and get some data.

(That’s a staged photo. Seriously, don’t do that.)