Back in university, I found the controls courses the most interesting.

But you don’t have to understand crazy math with imaginary numbers to appreciate the principles of control theory. They can be applied to sword fighting, and might give you a different perspective on your training or interpretations.

An important property of control is how fast you get there. I’m sure more or less everyone could deliver a controlled cut that stops before their opponent if they were given a few seconds to complete the motion. The sign of real skill is to swing as fast as possible, yet still be able to stop before contact.

Or in other words, to get there as quickly as possible.

Or in other, other words, to use the least amount of time to get there as possible.

The technical term for how long it takes to get to where you want to be is ‘Rise Time’.

How do we do that? If you want to get somewhere faster, you just push harder! If you want get across the room and tag a wall in the shortest amount of time possible, you are going to run as hard and fast as you can to get to the wall.

Simple! And nothing can go wrong.

However, if you are minimizing your rise time, you are going to be introduced to a little friend called Overshoot. Quite simply, the overshoot is how much you go past the target. 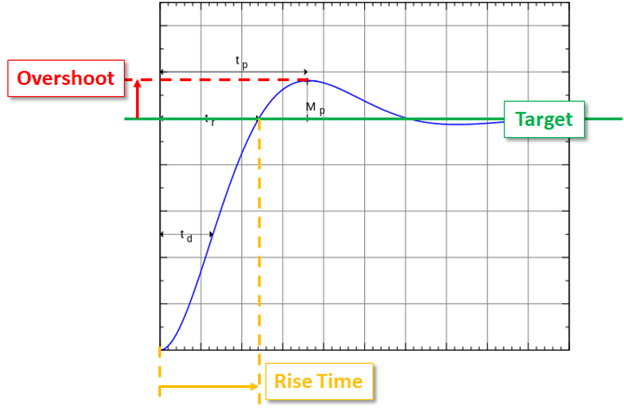 That doesn’t mean that you can’t come back to the right place, you can overshoot and then come back. Depending on what you are doing, the level of overshoot may or may not be important. If you are bringing your point online for a thrust and you overshoot their centerline by a few inches before bringing it back, it doesn’t matter so much. The point was online to their body the entire time. If you are doing no-gear drills with your partner, the overshoot might involve clocking them in the skull before the sword comes back to its target position. 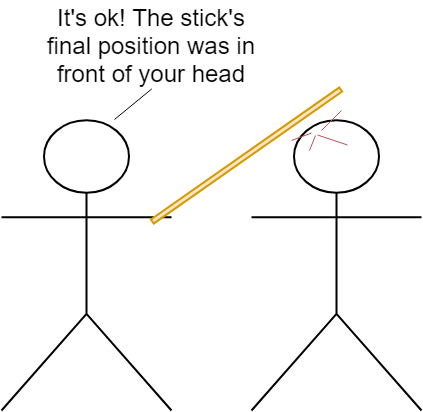 So how bad overshoot is depends on what you are doing. Which is important, because the fastest way to get somewhere is to overshoot it.

Settling time is how long it takes to get you stable at the target. If you get there really fast, but have little control and are wobbling all over the place, you don’t really have good control for quite a bit of time after the initial rise time is completed. Hence keeping track of settling time. 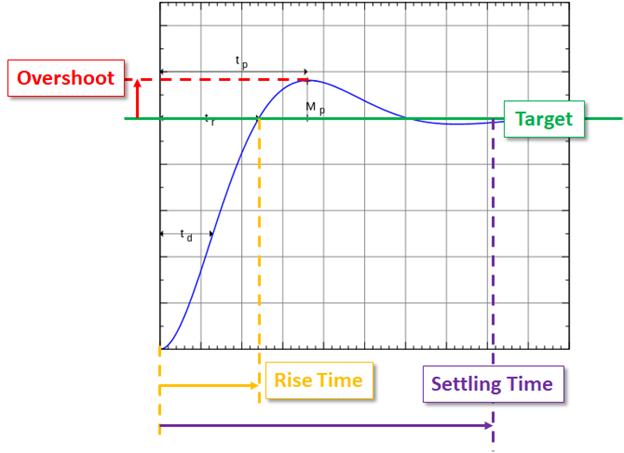 In the real world, 100% accuracy doesn’t exist, so settling time is usually described as the time it takes for the oscillations to be within a certain threshold. So you could say, how long does it take to bring your point online and have the tip wobble less than 2 cm to either side.

At this point you might be thinking, isn’t it just better to not overshoot at all and have perfect control? Maybe, maybe not. I’m going to simplify a bit, but how much control you have over the motion can be equated to the engineering property ‘damping’. Different from the process your sparring gear goes through while you work out in it.

The more you damp, the less chance of you overshooting, but the longer you take to get there. Damping falls into one of three categories:

Overdamped – You don’t overshoot, but slow down before hitting the target.

Critically Damped – A magical perfect damping where you get to the target as quickly as possible without an overshoot. This is more a mathematical construct than something that can happen in real life.

It all depends on what you want. Do you want to get there really fast and don’t care so much about overshoot? Then underdamped is the way to go. Do you really want to make sure you don’t overshoot? Overdamp. Trying to push the envelope but not overshoot? Attempt to find something as close to critically damped as possible.

Lets say you displace your opponent’s blade with force, and drive a thrust straight up the line to their face. If they push harder, what happens?

In the above example you are balancing your force with your opponent’s force. And, like any balance, if you make a change the scale doesn’t stay centered anymore. 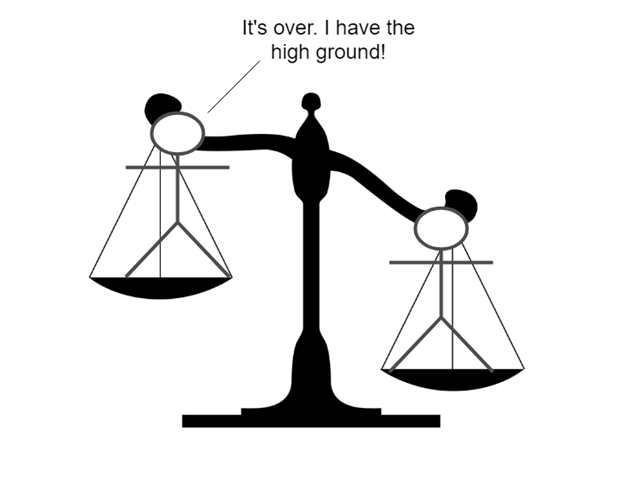 The ability of something to recover from these kind of unpleasant realities is called Disturbance Rejection. In this case, you got to where you wanted to be (point online) and something came along and tried to disturb that state.

Disturbance Rejection is a tricky thing. The faster you make something react, the more likely it is to aggressively overshoot the other way. Think of a beat on the sword (For people who do real martial arts instead of rapier, a beat is when you hit the opponent’s point offline aggressively in order to create an opening for an attack).

If the opponent is slow to react to the beat (the disturbance), they create an opening into which you can quickly thrust before they recover control of their sword. If they overcompensate and try to return to position quickly with a lot of force (over-aggressive disturbance rejection) they create a large opening on the other side of their blade.

(If nothing I’ve done in the past generates comments, that rapier bit should be the one.)

And the most important question. The only thing you care about from me.

How does this help you?

If you try to go purely based on math and physics it quickly becomes unmanageable. In practice, most of the time engineers also just say ‘fuck it’ and throw in some guess*. The key is to realize what is important, and what you can do to make it better. It’s something that martial artists have been doing since before the first manuals were ever penned, whether they were aware of it or not.

When looking at a technique you can think of which of these parameters are most important in optimizing. Let’s grab some quick examples.

Tuning is the process by which engineers tweak controllers to best meet the needs of whatever they are controlling. For instance, you can tune the robotic welding arm in a factory to make sure it doesn’t overshoot, or tune it to get the weld done as quickly as possible (rise time). When you are training, your are essentially tuning your nervous system to get as good as possible at the tasks that you are training for.

But what are you training for? Every control situation is different. If you only tune your body to stop right before impact, how effective do you think it’s going to be if you are trying to impact with a lot of speed? Likewise if you only tune yourself to get to the target as quickly as possible, how well do you think you will be at adapting to changes (or not killing your training partners!). As martial artists we should be cognizant of how we are tuning our bodies, and what we can expect from them in different circumstances!

“He’s talking about PID controllers and second order systems! Goodie!” If that’s you, then let’s talk a little more. 😉

The only academic source I’m currently familiar with on how humans control movements is a paper “Comparison of Natural and Artificial Control of Movement” by Arthur Prochazka. The main conclusions of this were:

Which is interesting, but probably not super helpful for informing training. If anyone has more knowledge on this subject I would love to hear about it!