This is a re-edit of an article I originally wrote in August 2014.

BpE – bilateral-hits per exchange, averaged over the tournament. This includes doubles and afterblows.

RAS – Relative Afterblow Strength. Something which subtracts 1 from the initial hit is a low RAS, whereas a full negation is a strong RAS.

2) The ability of a fighter to land an afterblow is only a function of the position* both fighters find themselves in at the time of the initial hit, not the rules.

This leads us to:

3) A statistically relevant difference in BpE between tournaments with different RASs can only be the result of behavior before the initial strike makes contact**. For doubles it’s fairly obvious that the behavior immediately before the double is the cause.

* In this case ‘position’ takes into account things such as momentum and mental focus. Configuration would be a more accurate, but harder to follow, term.

**assuming that other variables, such as audience participating, are controlled. This is often not a safe assumption to make.

Since only actions before the initial hit can affect the BpE, it means that the BpE is a function of the attacker’s commitment to try attack in a safe manner (Attacker Mitigation: AM), and the opponent’s propensity for putting themselves in a position to land an afterblow when they are hit by an attack. (Defender Maximization: DM).

We can look at both of these as functions of the strength of the afterblow rule. AS(RAS), (for those of you who loved algebra back in school) is the way in which the attacker’s behavior modifies to be safer as the strength of the afterblow rules increase. So we would expect to see attacks that engage the blade better, or attacks taking into account measure and tempo for a withdrawal.

Now we also have to consider that defenders are modifying their game in order to take advantage of the afterblow more effectively. The number of recorded afterblows should either remain constant or decrease as the strength of the afterblow rule increases.

By combining the two factors we get the total BpE for the tournament.

Now, as fun as it to talk theory we don’t have anywhere close to a statistical data set to actually evaluate this. But just for fun I ran the numbers from LP 2012, 2013 and 2014 open longsword which are available in their entirety. Many thanks to Ben Jarashow. 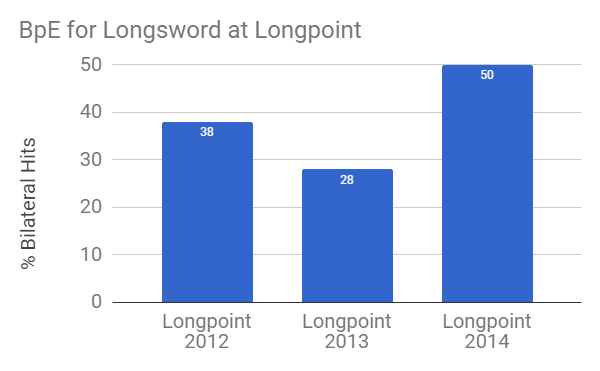 For those of you who don’t know, LP12&13 used a relatively strong afterblow system, but still weaker than full negation, and LP14 used a fully weighted afterblow.

This is just data on one event, but it shows that either:

Notes for the updated version

I’ve learned more about tournaments and data mining since I originally wrote this. I have a ton more data available for weaker afterblow rule sets, however I don’t have a lot of information from rule sets with strong afterblow rules. This is a shame as it’s not like there are a dearth of them out there. 😉

The data I have from tournaments with lower RAS agree with the trend to lower BpE. All I have from Full Afterblow tournaments are the numbers I jot down when I watch matches on YouTube. While this isn’t a very rigorous sample, it does tend to agree with this trend. I look forward to having more information in the future.